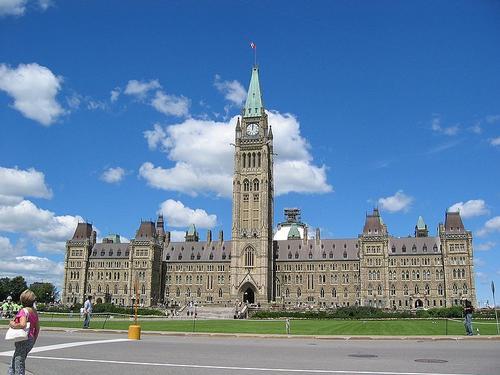 The ten provinces of Canada and three territories are part of a federation whose parliamentary form is parliamentary democracy. Canada is an independent constitutional monarchy within the Commonwealth and, following the British (Westminster) model, includes a Crown, a Senate and a House of Commons. The British king or queen is represented by a governor-general appointed for 5-7 years, who is assisted by a cabinet, the so-called "privy council". The Governor-General appoints and dismisses ministers and members of the federal Supreme Court and ratifies legislation, has consultation rights in the cabinet and delivers the speech from the throne. The largest political party provides the prime minister and ministers, who are elected from among the members of parliament. The prime minister is the most important person for the administration of the country.

In 1982, a constitutional amendment was made (Constitation Act 1982) that gave the Canadian parliament the power to make changes to the constitution itself without prior permission from the British parliament. Amendments to the Constitution require a decision by the federal parliament and by seven provinces (together more than 50% of the population). Regional representation is in place in the Senate and its 105 members are appointed by the Prime Minister, as in Britain. The political weight of the Senate is relatively small because the government decides on the candidacy of the senate members. Moreover, the Canadian cabinet is only accountable to the House of Commons, not to the Senate. The Senate is mainly concerned with amending legislative proposals.

The distribution of the 301 House of Commons seats is also provincial and is adjusted every ten years with each census. The members are elected by universal suffrage for five years and each represent a constituency ("ridings"). There is active voting right from the age of 18.

The state structure has a federal structure; Each province has its own Constitution, a Lieutenant Governor appointed by the Governor General, nominated by the Federal Cabinet, and a unicameral legislative assembly.

The territories are controlled by a "commissioner". This government official is accountable to the Canadian Department of Indian Affairs and Northern Development. This "commissioner" is assisted by a "Territorial Council", whose members are elected every four years by the residents of the territories entitled to vote. This board has the same function as the legislative assembly in the provinces. The territories are each represented by an elected Member of Parliament in the Federal House of Commons in Ottawa. The federal authority still manages finances, transport, economics, justice, defense and foreign affairs.

In Francophone Québec there is a strong secession movement. Since 1981, the Québécois have had two referendums on whether the province should secede and two times have voted against, although by a minority majority. In 1995 there was a very narrow majority of 50.3%, or 50,000 votes.

The federal government wants to take the wind out of the sails of the separatists through political and legal means. Legally, the federal Supreme Court has been asked whether the secession of Quebec is constitutionally permitted. The ruling in 1998 did not provide an unambiguous answer: unilateral separation of Quebec from Canada is not justified, but in the event of the wish of a 'large majority' of the people of Quebec, negotiations should be started to amend the constitution so that independence is possible.

Since 1995 support for separatism has declined somewhat, surveys show that most Québecois want to stay with Canada, but want a government that gains more power. It looks like a new referendum will not take place for the time being.

Legally, Canada is quite complicated. Statutes issued by the federal parliament are valid across the country; laws of the provincial legislator apply only in the relevant province. That is why there are major differences in laws and regulations from province to province - insofar as they concern matters that fall under the province's powers. Criminal law is a federal matter and therefore the same throughout Canada. For the current political situation, see chapter history. 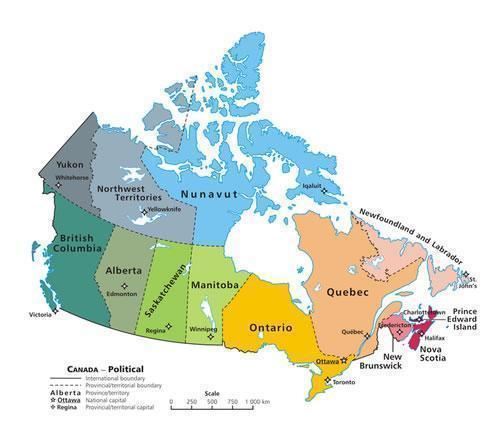 Since 1999, Federated Canada (established on July 1, 1867) has consisted of ten provinces and three territories. Each province has a high degree of autonomy, which is reflected, among other things, in the power to regulate the local administration itself. Furthermore, it is largely independent in areas such as prison, education, health care and taxation. The Crown is represented in each of the provinces by a Lieutenant Governor.

There is no general public education in Canada. Up to and including higher professional education, education is provided separately in each province. The provinces delegate responsibility for primary and secondary education to the locally elected or appointed administrations of public schools.

Children can start their educational careers in kindergarten or "kindergarten". When the children are six years old, they go to elementary school, the elementary school, where they spend six or seven years. Then they go to secondary education, the "high schools", or to lower technical, trade and other vocational schools. You can be admitted to higher or tertiary education with a high school diploma and after taking a few university entrance exams.

Higher education (often called "lectures") begins with an undergraduate program of at least four years, whereby one can obtain a so-called "bachelor's degree". After about two years, the "graduate" program leads to the 'master's degree' (doctoral student, master of law or engineer / Ir. Just like in the Netherlands, a doctoral degree is only obtained with a dissertation. Doctor of Philosophy, Ph.D., a title that dates back to the Middle Ages when philosophy was called the 'king of sciences'.

The province's economy is primarily based on oil and fishing. Oil accounts for some 44% of Newfoundland and Labrador's total exports and is the largest contributor to economic growth.

Fishing remains an important part of the provincial economy, employing 26,000 people. The total harvest of fish such as cod, haddock, halibut, herring and mackerel is 150,000 tonnes. Shellfish such as crab, shrimp and cockles are also caught. Another source of income is the controversial seal hunt.

Aquaculture is a new industry for the province, farming Atlantic salmon, mussels and steelhead trout.