Prince Edward Island is the smallest province in Canada, covering an area of 5657 km2. Prince Edward Island measures approximately 200 kilometres from east to west; its width varies from 6 to 65 kilometres. The island lies in the St. Lawrence Gulf and is only connected to the mainland by a bridge, the Confederation Bridge (13 km long). It is the longest unbroken arch bridge across the sea in the world. Prince Edward Island has only been an island for about 500 years, when rising sea levels created Northumberland Strait. 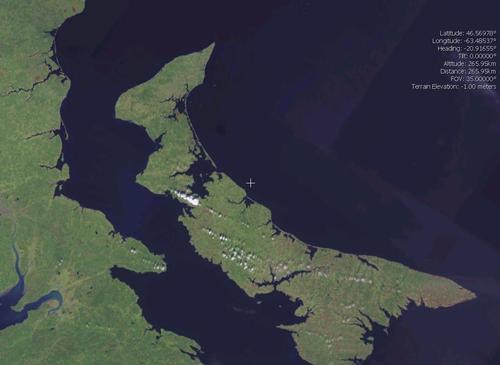 Diagonally across the island are the Bonshaw Hills, which are about 120 metres high. The highest point is 147 metres above sea level. Due to the ferruginous soil, the ground is rusty brown.

Prince Edward Island National Park is the smallest national park in Canada and lies along the coastline of the St. Lawrence Gulf. 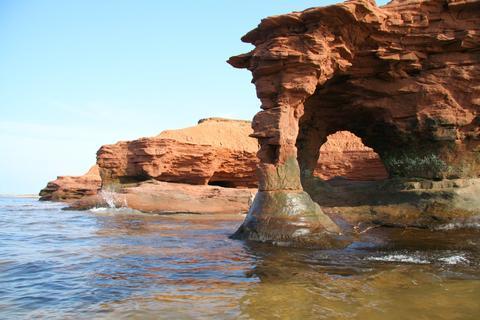 The park covers 40 km2 with rugged dunes that constantly change position due to the stormy winds, as well as saltwater marshes, rocks and extensive beaches. Prince Edward Island also has vast agricultural areas.

Prince Edward Island is surrounded by water and this, of course, has a great influence on the climate of this province. The winters are often turbulent, but milder than in the rest of Canada. Spring is cool and summer moderately warm with lots of wind. There are hardly any differences in altitude, so this has no influence on the climate.

From January to the end of April, the waters around Prince Edward Island freeze over and drift ice occurs until May.

Prince Edward Island has the most varied day-to-day weather in all of Canada. This is due to the different weather systems that rarely last long. These weather systems bring with them alternating polar, maritime, continental and tropical air. These air currents come from the Arctic Pacific, the Atlantic Ocean and the Gulf of Mexico.

Due to clouds, fog and mists, the number of hours of sunshine is slightly lower than in the rest of the country. Fog is particularly prevalent in spring and summer, while the rest of the year is virtually fog-free, unlike provinces such as Newfoundland and Nova Scotia.

Summers are fairly cool with an average July temperature of about 18.5°C and daily maximum temperatures up to about 25°C. Temperatures above 30°C are rare and the highest temperature ever recorded is 37.8°C.

Winter temperatures are influenced by the ice that surrounds Prince Edward Island in winter. Temperatures above -15°C are, however, rare. The frost-free period is between late May and early October, and lasts no longer than 130 days.

Precipitation falls throughout the year, averaging about 1000 mm per year in the southeast and 1100 mm in the centre of the island. Most precipitation falls from the end of autumn to the beginning of winter. The island has between 130 and 160 rainy days a year, 30% of which are snow. Prince Edward Island is one of the snowiest areas in Canada. After St. John and Quebec City, Charlottetown is the third snowiest city in Canada with about 330 cm of snow per year.

The wind is on average stronger than in the other Maritime Provinces, especially in the winter months, when it often storms. Tornadoes, severe thunderstorms and hailstorms are rare.

The island does suffer frequently from Atlantic storms, which bring tidal waves, strong winds and heavy rainfall. Sometimes, a tail end of a passing hurricane hits the island and brings heavy rainfall. On 22 September, 163.8 mm of rain fell in Charlottetown, a record on Prince Edward Island.

Cabot Beach Provincial Park covers part of Malpeque Bay, where about 10 million of the famous Malpeque oysters are caught each year. There is also an abundance of lobster, halibut, cod, tuna, herring and mackerel.

There is no big game on the island, but there is beaver, fox, mink, squirrel, raccoon and weasel.

The best known birds are the partridge, the pheasant, the grouse and especially many water birds. The Harvey Moore Wildlife Centre is a protected area that is visited by many migratory birds.