The total area of this enormous province is 3.3 million km2. The Northwest Territories, commonly referred to as NWT, are thus ten times the size of Germany and cover more than a third of Canada's total surface area. The entire province lies above the Arctic Circle, north of the 60th parallel. 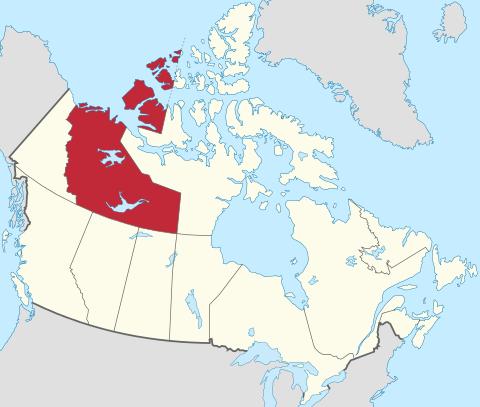 In the north is the unnamed highest peak of the Northwest Territories (2762 metres). Much of the Territories consists of tundra or 'barren lands' and ice fields.

Canada's longest river, the Mackenzie River, flows through the Northwest Territories at 1800 kilometres. One of the deepest lakes in the world can also be found here, namely Great Slave Lake with a depth of over 600 metres. Canada's highest waterfalls are also found in this province, with water falling from almost 90 metres into the South Nahanni River.

Both the northern geographic pole and the northern magnetic pole are located in this province. The geographical pole (Big Nail) is the place on the top of the earth where all imaginary lines meet. The magnetic pole can only be determined by compass and can vary considerably from year to year.

The Northern Lights or Aurora Borealis can be seen here in autumn and winter; colliding, electrically charged particles with atoms and molecules outside the stratosphere, cause dancing lights of all colours to appear in the sky after sunset.

The Northern Frontier region is located around Canada's northernmost city, the capital Yellowknife. There are thousands of small lakes in this region.

The most important rivers are the Mackenzie River, the Coppermine River, the Back River and the Thelon River. 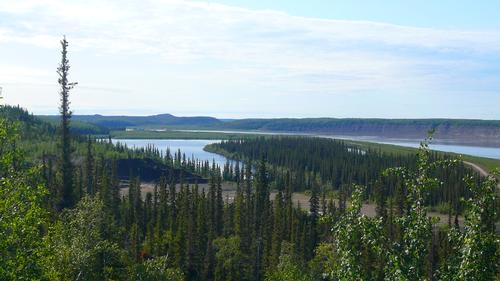 The NWT have a harsh climate. For about seven months of the year, the temperature drops below freezing, and at the height of winter, the average freezing temperature is 32 degrees.

In the north, of course, it is coldest. In Melville at 76 degrees north latitude, close to the magnetic North Pole, the annual temperature averages -17.7°C. In winter, the average temperature there is 38 degrees and in summer it is around 6°C.

It can also get very warm in the NWT; temperatures of 36°C have been measured at Fort Providence and Fort Simpson. The lowest temperature has been measured in Shepard Bay with -57°C, but this is also an exception.

The ground is frozen throughout the year, the so-called permafrost. Summer snow occurs, but is not common. To the north, the amount of precipitation decreases significantly; on the north coast only 60 mm falls each year.

Near Virginia Falls in the Nahanni National Park Reserve, there are 13 species of fish, more than 120 species of birds, as well as wolves, grizzly bears, Dall's sheep and Western Canadian woodland caribou.

The Northern Frontier region has the largest caribou herd in NWT with more than 400,000 individuals.

Snow geese, arctic foxes and polar bears can be seen in Auyuittuq National Park, one of the few national parks above the Arctic Circle.

The forested areas of the Territories are home to many wolves, foxes, lynxes, otter, beavers, rabbits and other small animals.

The plant symbol of the Northwest Territories is the nailweed.