The Canary Islands (Spanish: Islas Canarias) are located in the Atlantic Ocean west of Africa, at the same altitude as Morocco. The archipelago consists of seven inhabited main islands and six smaller ones. 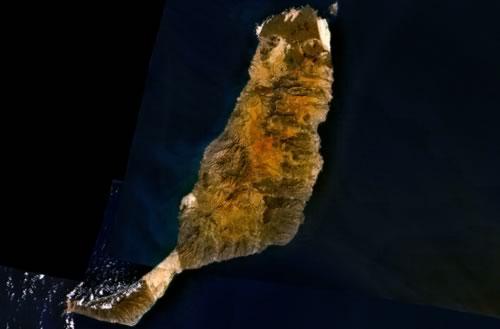 Fuerteventura is the second largest Canary Island after Tenerife. Its total area is 1731 km2 and the island is 110 kilometres long and no more than 30 kilometres wide.

Fuerteventura is located 115 kilometres from Cape Jubuy in present-day Western Sahara and consists of the main island Maxorata or Majorata, which is connected to the southern peninsula Jandía by the isthmus Istmo de la Pred.

Fuerteventura is the oldest island in the Canary Archipelago, having risen between 12 and 20 million years ago due, among other things, to volcanic activity from the Atlantic Ocean. However, the main cause of its formation has been a rise in the seabed. The last volcanic eruptions date back some ten thousand years.

To the northeast of Fuerteventura, separated by the fifteen-metre-deep strait El Río, lies the mini-island of Isla de Los Lobos. The only 6 km² island is home to a 127-metre-high extinct volcano.

Fuerteventura is fairly flat and has a reddish-brown desert landscape of sand and stones. Only in the centre are there some green oases and the north has some fertile valleys. The centre of the island is made up of a wide, elongated valley; a little further west is a 722 metre high mountain landscape with deeply incised valleys and some palm groves. From north to south, the island is further dissected by a series of extinct, eroded volcanoes.

When it rains on the island, the water mass flowing down to the valleys digs deep gullies in the hills known as 'barrancos'. These barrancos can eventually become valleys, or even gorges and ravines. On Fuerteventura you can find some barrancos in the west and the east.

Central on the island and in the north are bare hills and low mountains up to about 625 meters. In the south are quite steep, bare hills and the Jandia massif, with the highest peak Pico de la Zarza, which is about 807 metres high. 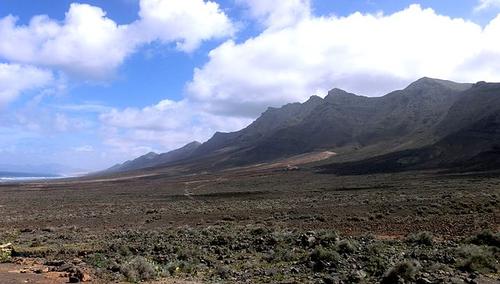 The most beautiful beaches, with a total length of 55 km, are located in the north and in the south on the east and west coast of the Jandía peninsula. In the southernmost part of the peninsula, around the lighthouse at Playa del Matorral is a green marshland area that has been declared a protected nature reserve due to its special flora. The golden yellow and white beaches were created by lime deposits from marine animals over a period of tens of thousands of years; the dark sand and pebble beaches consist of crushed lava rock.

In the extreme north-east lies a beautiful dune area, El Jable (20 km2), which together with the island of Los Lobos has been a protected nature reserve since 1982: Parque Natural Dunas de Correlajo-Isla de Lobos. Special here is the phenomenon of 'walking dunes', which are dunes that move a few centimetres every year due to the wind.

The west coast is dotted with rugged cliffs and small bays here and there.