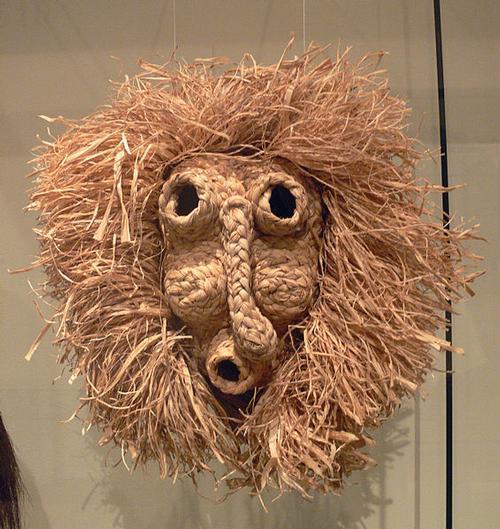 The original inhabitants of Canada are the Indians and the Inuit (Eskimos), who together make up over 4% of the population.

The Indians in Canada can be roughly divided into two groups: the farmers and the hunters. The first group, of which the Iroquois were the largest tribe, mainly lived in what is now Southern Ontario and along the St. Lawrence River. They lived in villages and mainly lived from agriculture. These farmers were the first to come into contact with Europeans and a degree of integration took place over time.

The many tribes that roamed the vast prairies lived on the hunt. They were hunters and collectors, real nomads, who followed the source of their existence: the bison herds. The bison gave the Indians everything they needed: his meat was their food and his skin was used for clothing and for tents (wigwams or teepees) in which they lived.

Currently, approximately 300,000 people are registered as Indian. They are divided into about 600 tribes, the so-called "First Nations", and live in about 2300 reserves.

The distribution of the Indian population differs enormously per province. Most of the Indians live in the provinces of Ontario, Manitoba, Saskatchewan, Alberta, British Columbia and the Yukon Territory. A small number, mainly in the north, still lead a nomadic life as a hunter. The major Indian tribes are: Algonquins from Ontario, Abénaquis and Iroquois from Québec, Micmacs from New Brunswick, Kananaskis from Alberta and Coquitlam and Matsqui from British Columbia. 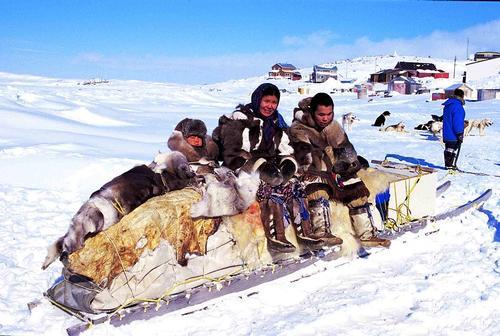 Inuit on a sledge CanadaPhoto: Ansgar Walk CC 2.5 Generic no changes made

The first group of Mongolian inhabitants of the north crossed the Bering Strait from Asia in a relatively warm period. Also called the pre-Dorset, these nomads spread north across the arctic archipelago and east toward Greenland. They hunted seals and fished in the Arctic Ocean. Approx. 1500 BC. it got colder in the north, forcing them to move south to the mainland. During this period, the pre-Dorset developed into the native Dorset culture and began hunting caribou.

However, the Dorset are not the direct ancestors of the Inuit. These were the Thule, also a Mongolian people, who lived around 1000 AD. Chr. migrated from Alaska to the warmer polar region. They hunted marine mammals such as walruses, seals and whales.

The Thule quickly spread across northern Canada to replace the Dorset, which had since migrated along the coast from Labrador to Newfoundland. Unlike the Dorset, they lived in fairly large settlements along the coast, while the Dorset lived in small family groups. A colder period began to emerge around 1500, and the Thule adapted to those new circumstances, living in smaller groups and becoming semi-nomadic. These people were the first to call themselves "Inuit".

The Inuit chose the polar region as their habitat, and they remained there to this day, despite the harsh climate. Today, almost all Inuit live in villages, most of which are located in places where military bases were located or, more recently, trading posts and mission posts. For example, long trips to hunt seals or to fish are still undertaken, but thanks to satellite, television, telephone and other telecommunication techniques, they have the most modern conveniences.

The Inuit, meaning "the people," included 49,255 souls in 1991, most of whom live in the Northwest Territories, North Québec, and Labrador. The Inuit are divided into seven groups, which are distinguished by subtle differences in culture and lifestyle: the Copper, Caribou, Iglulik, Mackenzie, Baffin, Labrador and Netselik. In 1996 the Inuit received permission from the federal government to set up self-government in 1999 in the newly formed province of Nunavut, which literally means "our country". Both the Indians and the Inuit are under the care of a special government body, which has funds for education, medical care and economic development. 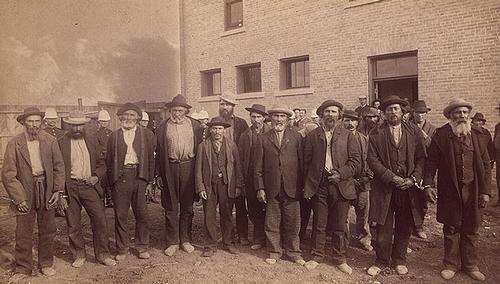 The indigenous peoples of Canada also include the Métis, approximately 200,000 people of mixed Indian-French descent.

The Métis people emerged when French-Canadian coureurs des bois (almost exclusively men) settled on the prairies with Native American women.
They lived as free people, had no king, commander or chief. They lived on products from the forests and sold or exchanged them for clothes, guns and salt, among other things.

Because of this way of life, the Métis were more of a "native nation" than a typical European community, although they spoke a Creole-French language (mistchiff = métis) and remained Catholic.

A quote from the famous Métis, Louis Riel, says enough about how the Métis feel like an authentic Canadian people:

"What matter is it what part of our blood is European or indian? We are the Métis. Our people was born in the pariries".

Almost the entire current population of Canada is made up of immigrants and their descendants. Over 25% are of British and Irish descent, approximately 24% are French, 4% German, 3% Italian, 2% Ukrainian, 1.4% Dutch. About a quarter of a million Canadians are originally Dutch and live mainly in the provinces of Ontario and Québec. Vancouver has the second largest Chinese community outside the Far East, just after San Francisco, with 100,000 souls. The government's immigration policy aims to admit only as many immigrants as is compatible with the land economy.

After 1945, Canada admitted approximately 4.6 million immigrants, with peak years of 1957 (approximately 280,000) and 1992 (approximately 252,000). The number of immigrants from Europe has been declining since the 1970s, and most of them are currently from Asia. Most immigrants settle in the provinces of Ontario, Québec, British Columbia and Alberta.

The number of non-Canadian-born residents fluctuates around 15%. Most immigrants settle in Toronto, Montreal and Vancouver.

Canada's population was 35.6 million in 2017. The population density is approximately 4 inhabitants per km2. Two thirds of the vast country is virtually uninhabited. Annual population growth in 2017 was 0.73%. Life expectancy at birth is 84.7 years for women and 79.3 for men. (2017) 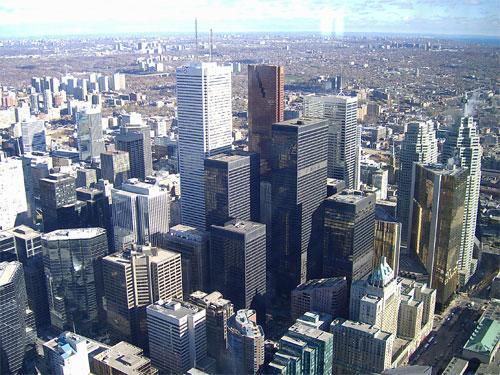 Most of the population is concentrated in a relatively small strip along the southern border. More than 80% of Canadians live no more than 200 kilometers from the border with the United States. The center of gravity lies in the area of the St. Lawrence and the Great Lakes: here are seven of the fifteen major agglomerations in Canada. The urban population comprises 81% of the total population. The main focus is in the provinces of Ontario and Québec, with successively 36% and 26% of the total population. 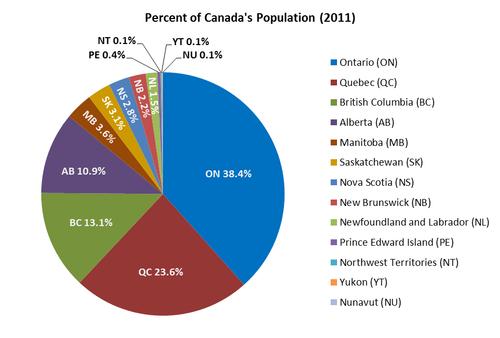 Percentage by province of the Canadian populationPhoto: Hwy43 CC 3.0 Unported no changes made

A special group are the approximately 600,000 Acadians. Acadia was the eastern part of former French Canada, colonized from 1604 and partially assigned to the Treaty of Utrecht in 1713. The territory corresponded to the current coastal provinces of Nova Scotia and New Brunswick, and was the subject of ongoing conflicts between England and France, which Nova Scotia lost to the Peace of Utrecht.
In 1755, some 18,000 Frenchmen refused to show allegiance to England, after which they were deported to other British colonies, especially Louisiana in the United States.
At the Peace of Paris in 1763, Acadia finally fell into English hands. Today, there are approximately 1 million Acadians living in Louisiana, 300,000 in the territory of the former Acadia, and the same number in the rest of Canada.