Burgundy has a lot to offer tourists, from special nature reserves to historically and religiously interesting cities and many villages that have been declared the officially declared 'Plus beaux villages de France' category.

Dijon is the capital of Burgundy, and this city "with the hundred bell towers" has modern shopping streets and terraces, also medieval houses, churches, monuments and museums. 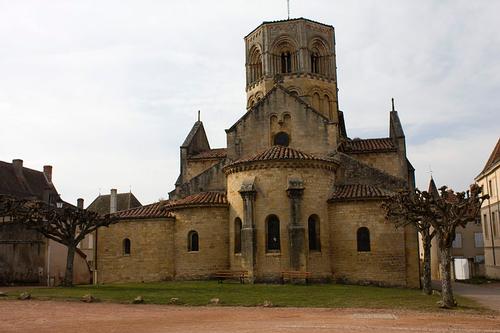 Semur-en-Brionnais belongs to the official category 'One of the most beautiful villages in France - Plus beaux villages de France)', with the castle of Saint Hugues, noble houses, Romanesque gardens and the collegiate church of Saint Hillaire from the 12th century .

Noyers-sur-Serein also belongs to the aforementioned category of villages in France with its timber-framed houses, a 13th-century castle and a famous truffle market in autumn.

Flavigny-sur-Ozerain, with streets from the Middle Ages and the Renaissance, is also one of the 'most beautiful', with a medieval fortress around Benedictine Abbey Saint-Pierre, where the famous anise sweet 'Anis de Flavigny' is made and in summer the famous festival of baroque music, 'Musicales en Auxois' is held.

In Chalon-sur-Saône, the history of photography is exhibited in the Musée Nicéphore Niepce. Musée Dominique Vivant Denon exhibits paintings by French, Italian and also Dutch artists from various centuries. 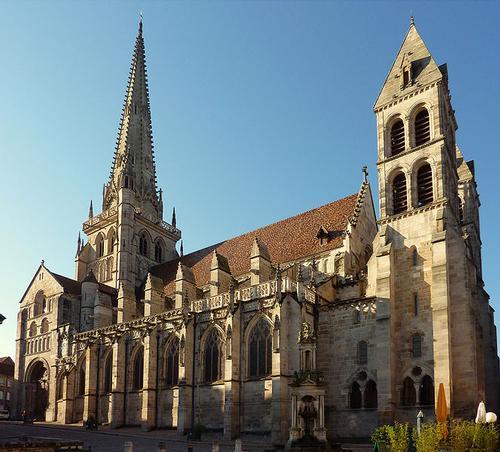 Autun is a city of Gallo-Roman origin with the largest amphitheater (20,000 seats) in the Roman world, the 12th century cathedral of Saint Lazare and the Rolin museum with decorative art from the last four centuries.

Nevers was also an important place in Gallo-Roman times, and in the fifth century Nevers became an important monastery center. The body of Bernadette Soubirous (Lourdes!) Is located in the chapel of the monastery of Saint-Gildard and Nevers and has therefore become an important pilgrimage site.

Auxerre is the capital of Basse-Bourgogne and developed into an important trading city at the beginning of our era and in the Middle Ages into a pilgrimage site for Saint-Germain and in the crypt of the Abbey Saint-Germain are some of the oldest murals of France. Other places of interest are the Saint-Etienne cathedral and the authentic skipper's quarter Quartier de la Marine.

Châteauneuf-en-Auxois, with its towers, keep and ramparts, is a typical example of Burgundian military architecture from the fourteenth century.

In Châtillon-sur-Seine, among other Celtic finds, the famous man-sized amphora of Vix was found, the largest ancient vase ever found. The archaeological treasure is on display in the Musée du Pays Châtillonnais.

In Guédelon you can visit the construction site of a medieval fortress built there with materials and tools from that time. Many great Renaissance style castles were built along the River Yonne in the 16th century, including the Maulnes, Ancy-le-Franc, Tanlay and Saint-Fargeau castles. The Castles Route in Southern Burgundy takes you past the castles of Cormatin, among others, with one of the most beautiful gardens in France, Sully and Drée. the 17th-century Bazoches Castle, near Vézelay, houses a church, three libraries and a 17th-century sundial. 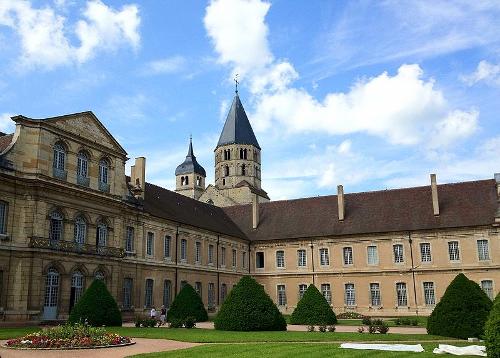 Between 900 and 1200, the Benedictine Abbey of Cluny (founded 910 and not completed until around 1150), the largest abbey in Christianity and most famously Abbot Saint Hugues, was the center of an important reform movement with political power extending over large parts of Western Europe. The ecclesiastical architecture also conformed to Cluny's insights and regulations, including the priory of Anzy-le-Duc and the churches of Montceaux l'Etoile, Marcigny (Saint-Nicolas), Iguerande and those of Châteauneuf-en-Brionnais, one of the last Romanesque buildings in Burgundy. Despite the fact that Cluny Abbey was largely destroyed during the French Revolution, the remains are still very impressive. The Basilica of Paray-le-Monial is one of the finest examples of Cluniac architecture, is also very similar to Cluny Abbey, and is an important pilgrimage site. The basilica Sainte-Marie-adeleine in Vézelay, restored by Viollet-le-Duc, is a UNESCO World Heritage Site. The austere early Romanesque abbey of Saint Philibert of Tournus is one of the most important French Benedictine monasteries, including a 33-meter-long dining room and the Center International d'Etudes Romanes. 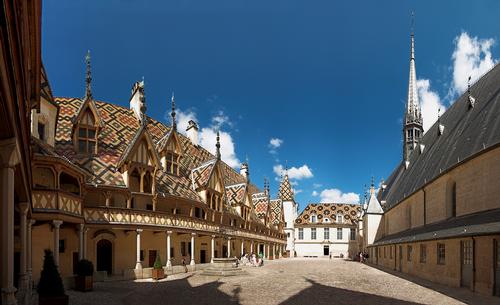 The highlight of the city of Beaune is the Gothic-style 15th-century Hospices of Hôtel-Dieu, where the sisters cared for the poor, disabled, orphans and the sick until 1970. The famous wines from the Hospices vineyard are sold through a public auction every November, and the International Festival of the Baroque Opera is held in July. Until the founding of the Archdiocese of Paris in 1622, northern Sens was the capital of Christianity and has the first Gothic cathedral in France, the Saint-Etienne Cathedral, with one of the richest treasuries in France. Founded in 1118 and yet exceptionally well-preserved, the Cistercian Abbey of Fontenay is a UNESCO World Heritage Site, and is home to one of Europe's oldest metal workshops and walking through the monastery, you will feel as if you were back in the 12th century. The restored priory church of Charité-sur-Loire is also on the World Heritage List and is therefore one of the most beautiful Romanesque churches in Burgundy.

The Burgundian part of the Loire invites to fishing, hiking, canoeing and cycling, in short, enjoy the nature around the last truly untouched river in Europe. In La Charité-sur-Loire you can cross the Loire while sitting on a donkey via a bridge. Since Gallo-Roman times, Burgundy has been cultivating wine, and it is therefore not surprising that the vineyards of the Côte Viticole currently yield no fewer than 32 celebrated grands-crus, including Marsannay, Vosne-Romanée, the Chambertin, the Clos de Vougeot and the Nuits-St-Georges of the Côte de Nuits; the Santenay, the Montrachet, the Pommard, the Saint-Romain, the Volnay, the Auxey-Duresses of the Côte de Beaune. Not only the Loire, but also the Burgundy canals, all built between the 17th and 19th centuries for the transport of wood to Paris, lead along a varied landscape and lead to several rivers. The massif of the Morvan Regional Park has several lakes built in the 19th century, which were then used for the transport of wood, but are now entirely dedicated to tourism, including the lakes Settons, Panneciëre, Reservoir de Chaumeçon, Saint Agnan.