On July 1, 2014, Arizona had 6,731,484 inhabitants (approx. 23 per km²), of which 5% (approx. 300,000) are Indians, the third largest Indian population of all American states. In terms of population, Arizona is in 15th place, in terms of population density in 33rd place. about one-third of Southern Arizona's population has Spanish roots. In 2014, more than 24% of the population was under 18, almost 16% was over 65. The roots of the white population of Arizona are, in order of importance, in Mexico, Germany, Ireland, England, and Italy.
The number of residents varies considerably from county to county, Greenlee County has barely 8,000 residents, Maricopa County has the most residents, nearly 4 million, and is the fourth most populous county in the United States. Despite the climate, about 90% of Arizona's population lives in the south of the state, especially in the cities of Phoenix and Tucson. Approx. 80% of Arizona residents live in Maricopa County or Pima County. With the exception of Wyoming, all states in the western United States are exploding, including cities like Tucson and Phoenix in Arizona. Phoenix, in particular, currently the fifth largest city in the United States in terms of population and the largest state capital, is an exponent of this development, with a population growth rate of over 60% since 1990, and the main driver of the tremendous population growth of the past. decades. Phoenix grew from 107,000 inhabitants to 439,000 inhabitants in the period 1950-1960, in 1990 there were already more than one million.
Arizona saw its population since the 1950s, important in this was the invention of the air conditioning, become ten times larger and since 2000 the population has grown by more than 25%, only the state of Nevada has grown even faster. From 2010 to 2014, Arizona's population grew by 5.3%.

More than a quarter of Arizona is occupied by approximately 50 Indian reservations. Major Arizona tribes include the Navajo, Pueblo, and Apache. Most Navajos live in the largest reservation in the United States, Navajo Nation (67,340 km2). The area of this reserve exceeds ten of the fifty American states and is, for example, about the same size as the Benelux. The reserve is largely located in northeastern Arizona, southern Utah and northwestern New Mexico. About 350,000 Navajos live there, two of them thirde is not older than 21 years and between 25 and 50% calls themselves Christian. The capital of Navajo Nation is Window Rock.
The Pueblo, some 60,000, live all over Arizona, especially along the Colorado River. However, most Pueblo live in New Mexico. From about 1300, many Pueblos left their cities and moved to other areas.
The approx. 57,000 Apache live in Arizona and southern New Mexico. 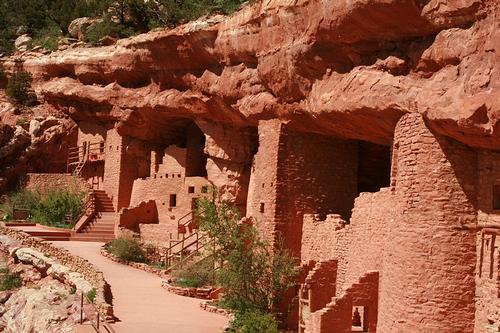 Smaller Indian tribes still living in Arizona are the Tohono O'odham (called Papago by the conquistadors), mainly living in the Sonoran Desert of eastern Arizona and northwestern Mexico. The Tohono O'odham Reserve, the third largest Indian Reservation in the United States at 11,534 km, is located in the counties of Pima, Pinal and Maricopa.

The Quechan live in the Lower Ford Yuma Reservation from the Colorado River in Arizona and further into California just north of the Mexican border.

The Hopi live in the Hopi Reservation in northeastern Arizona. Just over 18,000 Hopi, descended from the Ancient Pueblo peoples, were counted in 2010. The tribe now consists of about 650 people and works primarily in the tourism industry around the Grand Canyon.

The Paiute can be divided into the Northern Paiute, the Owens Valley Paiute and the Southern Paiute, which live in Arizona, Southeastern. California, Nevada and Utah.

Other Native American tribes are: Hualpai or 'People of the Great Pine Trees', Mohave and Chemehuevi.