Arizona has a mostly desert climate with hot summers but also night frosts, especially in winter. In the northern part of the state, which is at a higher elevation than the rest, the climate is noticeably colder with temperatures reaching below-18°C and precipitation as high as 600-650 mm per year. It is rare, but in Phoenix it can rain for days on end. The capital Phoenix and also Tucson (averaging 300mm of rainfall per year) are cities where the temperature is between 15°C and 21°C in winter and can rise to 37-46°C in the hottest month of July. Phoenix has an average of 325 sunny days per year and there is 170-180 mm of rain per year. From June through August, the maximum daytime temperature in Phoenix is exceeded only by cities in the Middle East. Lake Havasu City in western Arizona is also a place where it can get very hot in the summer with an average annual rainfall of only about 100 mm. Lake Havasu City also holds the dubious distinction of having the highest temperature ever recorded in Arizona: 53.3°C on June 29, 1994. Other places in Arizona where it was once more than 50°C are Buckeye, Laveen, Litchfield Park, Willow Beach, Yuma Airport, Casa Grande Monument and Phoenix Airport. Located low in western Arizona, Yuma and Bullhead City are widely regarded as the hottest and driest places in the United States. According to the Guinness Book of Records, Yuma is in any case the sunniest place on Earth, with an average of about 30 mm of rainfall and 339 sunny days per year. Bullhead City is considered the hottest place in the United States, especially in the summer when it is around 48-49°C daily during the day.
Cities like Flagstaff and Sedona are much cooler during the day with winter temperatures between -1°C and 5°C and in summer between 26°C and 33°C. In general, temperatures in Flagstaff are about 6-7°C lower year-round than Phoenix. In the northern part of Arizona, temperatures can drop below-18°C in winter.
The Sonoran Desert is a subtropical desert, yet it has two wet seasons with summer monsoons and winter rains.

On average, it is seven degrees cooler at the South Rim than at the bottom of the Grand Canyon. In summer the temperatures are around 30°C during the day and around 10°C at night. In autumn it is even cooler and more changeable, and around the end of November snow can fall and it freezes at night. January is the coldest month with average nighttime temperatures between-6 and-12°C and maximum daytime temperatures between 4 and 10°C. In winter it can be beautiful clear weather, but snow storms are also possible. In the canyon it is much drier than at the top, with an average of about 200 mm per year against 400 mm. The temperature at the bottom of the canyon, often accompanied by strong winds, rises almost daily in summer to a minimum of 37°C with peaks of 43°C. In the middle of winter, the temperatures at the bottom of the canyon seldom drop below freezing, on average the temperatures are between 4 and 13°C.
On the North Rin it is about 10°C cooler during the day than on the South Rim. twice as much rainfall. The average daytime temperature in July is around 25°C, at night the temperature drops to around eight degrees. Due to snowfall, in the winter there are several meters of snow, the Noordrand is closed from the end of November until May.

Due to summer showers and winter storms, the Sonoran Desert, where approximately 280 mm of precipitation falls per year, is the greenest of all deserts in the Southwestern United States.
The hottest months are June, July, and August;December, January, February and March are the coldest. Most precipitation falls in the winter in the form of rain or snow. So much so that, mainly in eastern Arizona, near the New Mexico border, there are winter sports opportunities at the Arizona Snowbowl near Flagstaff, where the slopes of Agassiz Peak average 660cm of snow per year. 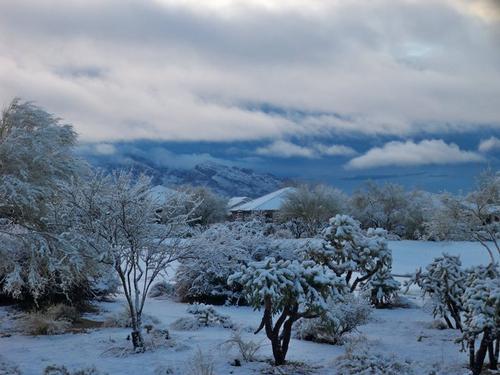 Other winter sports areas are in the White Mountains near the towns of Greer, Eager, Lakeside, Pinetop and Pringerville. Arizona's largest ski resort, Sunrise Park, is located near Greer. In this area, you should even watch out for snow storms. The southernmost ski resort in the United States is Mount Lemmon in the Santa Catalina Mountains, just north of Tucson.
In the summer, from mid-July to early September, thunderstorms with short but very heavy rain showers. This can ensure that within minutes dry riverbeds turn into raging water flows, so-called 'flash floods', and roads become impassable. In September 2015, the town of Hildale, on the border of Arizona and Utah, was hit by a wall of water, mud and debris after a flash flood. Thirteen people died.

Another phenomenon common in the arid, flat areas of Arizona are the 'dust storms', gigantic dust clouds that are not only troublesome but also dangerous situations in the traffic.
For example, a dust storm in September 2015 disrupted air traffic to and from Phoenix. Visibility was very poor in large parts of the city and the mountains surrounding the city were also largely shrouded in dust clouds. 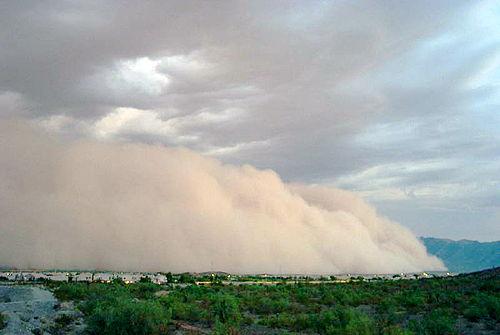