The Germanic language group originated about 2500-2000 BC, but has only been widely distributed since the beginning of the era. Britain was then dominated by the Celts and the Romans. Between the 5th and 7th centuries AD. followed the invasion of Germanic tribes like Angels, Saxons, Jutes and Frisians. These peoples caused almost all Celts to be expelled to the less inhospitable areas of Britain, such as Wales and Scotland.

The Germanic dialect is usually called Anglo-Saxon or Old English and was already written in around 700. The Anglo-Saxons were followed by the Vikings, who brought North Germanic words and finally by Normans who introduced French language and culture to Britain. From a combination of their Norman dialect and Anglo-Saxon, English eventually emerged, as is now spoken in England.

English from the period 1100-1500 is called Middle English, after which New English has been created since 1500. The colonial era, the massive immigration of the English and Irish who began to use English as their common language in their new homeland, and England's dominant position in trade, aviation and shipping, led to English developing especially in the 19th century to a world language. It is currently the most widely spoken and understood language in the world. The standard language used in England is called "the Queen's English". 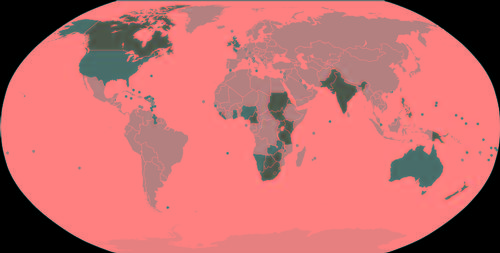 Map Official English language in the WorldPhoto: Eddo CC 3.0 Unported no changes made

English is the native language of more than 300 million inhabitants of, among others, Great Britain, Ireland, United States, Canada, Australia, New Zealand, Jamaica and South Africa. Moreover, it is often the working language in former British colonies. As an international colloquial language, English also plays an important role in aviation, the film and computer world and pop music.

Cockney English and other dialects

In the past centuries, the residents of London's East End developed a special language: Cockney. The Cockneys are people born in the East End, especially those who live within the sound of Bow Bells, which means as far as the church bells of St. Mary-le-Bow can be heard.

Characteristic for the Cockney is the "glottislag", briefly interrupting the sound of the voice or switching it on by briefly closing the vocal gap and interrupting the vibration of the vocal cords. Frequently, the sound occurs, as in words like "better", where the "t" is pronounced as glottislag, which is often rendered even better.

Furthermore, there are an overwhelming amount of regional dialects and accents that cannot be followed by outsiders. Besides the Cockney of London, mention can be made of the Scouse of Liverpool, the Geordie of Newcastle and Tyneside and the Brummie of Birmingham and its surroundings.

The English that the Americans use is closer to the English written and spoken when the American colonies were founded than the language of present-day English. There are thousands of words in England that are hard for Americans to recognize: