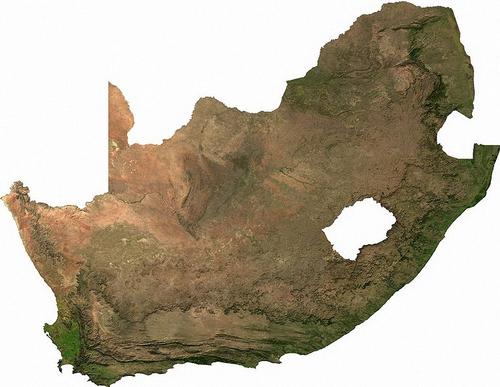 Entirely enclosed by South Africa as an enclave, the mountainous state of Lesoto (total limit length 909 km). In 1947, the (then) Union of South Africa formally took over the uninhabited Prince Edward Island and Marion Island off the coast of Cape Town. Other well-known islands off the coast are Santa Cruz near Port Elizabeth and Robben Island near Cape Town. South Africa borders the Atlantic Ocean to the west and the Indian Ocean to the east. The distance from the Limpopo River in the north to Cape Agulhas in the south is approximately 2000 kilometers. The distance from Port Nolloth in the west to Durban in the east is approximately 1500 kilometers.

South Africa's main river is the Orange River, which rises in the Drakensberg Mountains of KwaZulu-Natal and flows into the Atlantic Ocean for more than 2,200 kilometers at Oranjemund and Alexander Bay. Other important rivers are the Vaal, the Limpopo, the Great Fish River and the Tugela. Most of these rivers are barely navigable.

The landscape of South Africa is very varied and can be divided into 21 natural regions.

The Lesotho highlands form the highest part of southern Africa and form the border between Lesotho and South Africa. The highest peaks rise above 3400 meters and the mountain tundra often falls in winter.

The Hoogveld is a gently sloping, elevated area and consists mainly of savannas. Here is also the urbanized Witwatersrand surrounding the important gold and coal mines of South Africa. A lot of corn is also grown here.

Northern Transvaal has various landscapes, including the mountain ranges of the Soutpansberg and the Waterberg Plateau and in between lies the Pietersburg plain, where livestock farming is important.

The Soutpansberg is an important forestry area.

The Ghaap plateau is located in the north of the Cape Province, where due to the semi-arid climate, only livestock farming is possible.

The flat and extensive Bushman plain of the inland plateau is also located in the north of the Cape Province and is only covered with some scrub and only suitable for extensive sheep farming. Striking are the many "pans", lakes that are only filled with water for a certain part of the year.

The Bushveld basin is located north and west of Pretoria. In the flat, central part of the basin, many minerals and precious metals such as platinum, vanadium and chrome are found. The clayey black peat soil is extremely fertile and many crops are grown here.

The flat sandy Kalahari basin is a semi-dry savanna and mainly covered with acacias. In the past, this area was characterized by desert dunes, of which only a few remain.

In the Northern Cape Province lie the valleys of the Lower Vaal and the Orange River, two of South Africa's major rivers. The valleys are located in highly developed areas with, among other things, a gigantic irrigation project (Vaalharts) in the Hartsrivier, a tributary. Kimberley, the center of diamond mining, lies between the two valleys.

The Karoo is a vast semi-arid plain with flattened hills covered with grass and scrub. The highest points of the plateau are Giants Castle (3820 m), Cathkin Peak (3650 m) and Mont aux Sources (3299 m) in the Drakensberg. Only some sheep farming is possible here.

The Natalse Drakensberg is also part of the Great Escarpment with peaks above 3000 meters. A lot of mountaineering takes place here.

The Cape Corrugated Mountains consist of a series of mountain ranges, which are covered with a unique vegetation, the "fynbos" or macchia. Mountaineering is also very popular here. In the valleys between the mountain ranges there are centers for fruit growing and viticulture. The coastal areas have beautiful beaches and deep bays. The only more closed bay is the Saldanha Bay on the west coast.

The Namaqua highlands consist of dry, rocky mountains where a lot of wild flowers grow when there is enough rain. The area bordering Namibia is the Richtersveld.

The Limpopo River forms the border between South Africa and Zimbabwe. The river flows in the Limpopo Valley, a dry savanna area with open forest land where many livestock are kept and where there are many wildlife parks.

The undulating landscape of the Lowveld or Lowveld lies between the base of the Great Escarpment and the Lemombo mountains in Swaziland, Northern Natal and Transvaal. Due to the hot tropical climate in the summer, the cultivation of tropical fruit is possible here. Here is also the largest reserve in South Africa, the National Kruger Park with forests and savannahs.

Landscape Kruger Park near the Sabie RiverPhoto: Freestock.ca CC 3.0 Unported no changes made

The South East Coast Hinterland is an area of rolling hills and deep river valleys. It extends from Swaziland to the former Ciskei in the south. There is a lot of rainfall that is drained by many rivers to the Indian Ocean.

The Lemombo mountains lie on the border of South Africa and Mozambique in Eastern Transvaal, Swaziland and the north of KwaZulu / Natal. This mountain range is characterized by deep gorges through which rivers flow to the Indian Ocean.

In the northern KwaZulu / Natal lies the coastal plain of Zululand, sandy plains covered with scrub. There are also many lakes and estuaries here. Many animal species live in different nature reserves.

The Southern Coastal Plateau stretches from its southernmost point in Africa to Port Elizabeth. Here you will also find beautiful forests and lagoons.

The rolling plain between the Atlantic Ocean and the Cape Corrugation Mountains is Swartland. A lot of grain is grown here.

The Namib is a desert and the Benguela Gulf Stream flows along its coasts. The coastal waters are very important for fishing in South Africa. It is also an inhospitable area.