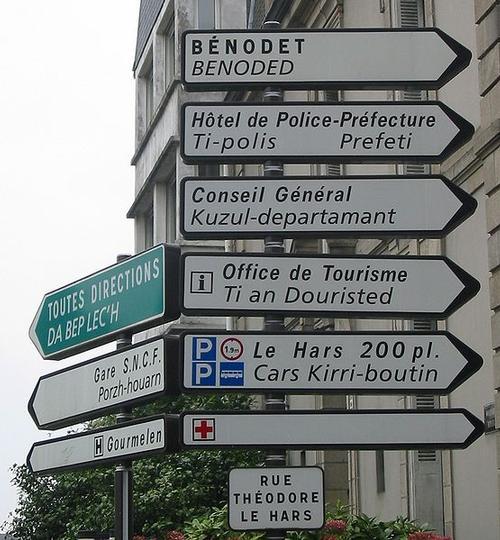 In Brittany, a Celtic language is spoken in addition to French: Breton or "Brezoneg". The Celtic languages of Western Europe are divided into two groups. The first group consists of Irish Gaelic and the almost extinct Scottish Gaelic and Manx languages. The second group consists of Kymrian (Welsh) and Breton; the closely related Cornish is extinct. Breton thus stems from Celtic, which used to be a widely spoken language in Europe. When Brittany, or Armorica as it was called at the time, was subdued by the Romans some fifty years before our era, the Bretons left for present-day Great Britain and the Celtic language disappeared. They returned between the 5th and 7th centuries and Brittany remained an independent state until the 15th century. Breton was spoken all over the peninsula west of the line from Mont-Saint-Michel to the mouth of the Loire. The extreme border was approximately at the level of present-day Rennes.

Breton is still spoken and understood by some 300,000 to 500,000 people today, far less than the 1,300,000 people who achieved it in 1930. By 1900, everyone in Brittany knew Breton, and only half of the population spoke French. In 1950 there were only 100,000 people who mastered Breton and not French. Breton is only the official language in the region west of the St-Brieuc-Vannes line, and then only by the older generation. The area where Breton enjoys the greatest following is the square between Vannes, Quimper, Brest and Paimpol. Many place names and family names go back to ancient Breton from the 5th to the 10th century.

Along with the revival of Breton culture in the 1960s and 1970s, the Breton language has also been revived, mainly thanks to the establishment of bilingual schools, the so-called "Diwan schools". There is also an official Breton academy and a Breton television channel (TV Breizh), all of which try to keep Breton alive.

In Breton, both English sounding hisses and Germanic guttural sounds are used.

Léon with the Léonard

Léon's Breton is considered the purest and literary form; the most different is the dialect in Vannes.

A language that has almost been forgotten but still exists is Gallo (Breton: Gallec) or British Romanesque. Supporters want to define Gallo as a language and not just a dialect. Gallo, like old French, Picardy and Norman, is a Romanesque language that comes from folk Latin. The border between Gaul and Breton Brittany now runs along the line from Plouha (Côtes d’Armor) to Ambon (Morbihan) over Mûr-de-Bretagne.

The elective "Gallo, language and culture" is taught at six colleges and nine secondary schools of the Academy of Rennes and at the university teacher training courses of Saint-Brieuc and Vannes.

For information about French, which is of course the official language, see France