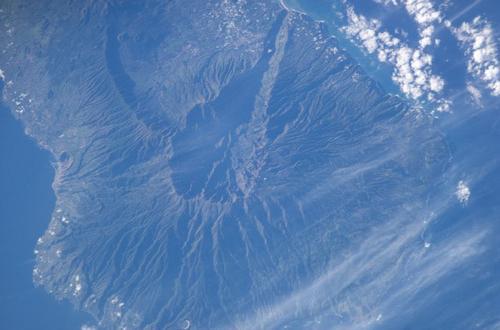 The Canary Islands are geographically part of Africa, but politically they have been part of Spain since the 15th century. The archipelago consists of two provinces under the name: Autonomous Region of the Canary Islands.

The total area of La Palma is 726 km2, which makes it slightly smaller than Lanzarote. The maximum distances on the island are 29 km from east to west and 47 km from north to south.

Like other islands in the Canary archipelago, La Palma is an island of contrasting landscapes. Roughly speaking, La Palma has barren lava soil in the south and an exuberantly vegetated hilly landscape in the north. One of the reasons for this is the large difference in rainfall.

The south of La Palma consists of a young volcanic landscape, of which the traces of recent eruptions are still visible. This part of the island is dominated by the mountain ridges Cumbre Nueva and Cumbre Vieja.

Scattered along the latter mountain range are around 120 craters, seven of which have been active in the last 500 years. This makes the Cumbre Vieja one of the most active volcanic areas in the world.

One of the largest extinct craters in the world is located on the northern part of the island and forms the national park (since 1954) Caldera de Taburiente. This gigantic crater has a diameter of ten kilometres, a circumference of 28 kilometres and a maximum depth of 1,500 metres. The slopes of the Caldera (Spanish for 'cirque') are criss-crossed by deep ravines or 'barrancos'.

Exactly how old the Caldera is (2-4 million years) and how this giant crater was formed is still not entirely clear. That it is a volcanic crater is very unlikely; nowadays it is assumed that the Caldera arose from volcanic deposits below sea level, which were then pushed up to 4000 metres above sea level millions of years ago by shifts or volcanic activity. Then either a long-term erosion process started or perhaps a hollow space was created under the centre of the Caldera and collapsed at some point.

In the interior of the crater, an abundance of water can be found throughout the year in streams, brooks and waterfalls. However, the more than one hundred springs produce less and less water per second.

In 1971, the last volcanic activity on La Palma took place, which was also the last activity on the Canary Islands. On the slope of San Antonio, another volcano arose: the 439-metre-high Volcán Teneguía. The eruption lasted 25 days in total.

During eruptions of volcanoes in the south, sometimes huge areas are covered with ashes and 'lapilli' (lumps of stone of volcanic origin). This is how the 'jables' were created, the bizarre landscape covered with a layer of dark ash somewhat reminiscent of a sandy desert. The largest and best known jable of La Palma is El Llano del Jable. Mulberry trees can still be found in this area, the leaves of which serve as food for the silkworm. Nowadays there are still a few silk weavers active.

The highest point of La Palma is the impressive Roque de los Muchachos with 2426 meters, located on the edge of the Caldera de Taburiente. This makes La Palma officially the steepest island in the world in proportion to its total area.

La Palma even has some small rivers, such as the Angustias. 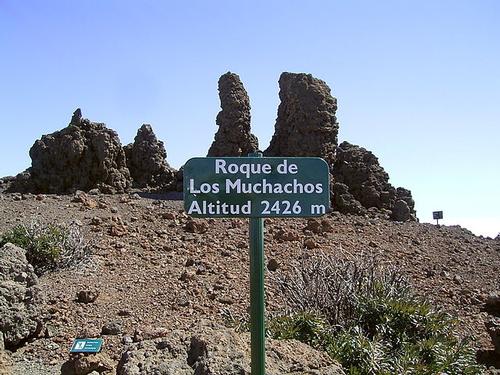