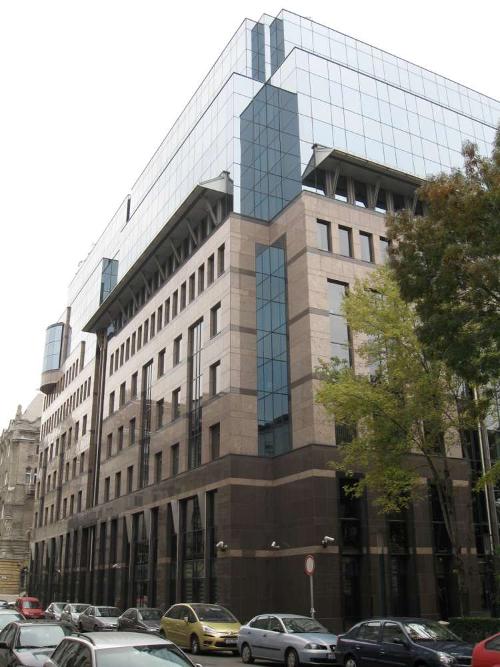 After 1989, the restructuring process of the Hungarian economy towards a market economy was picked up and is now almost completed. The fact that things are not going so well across the board is due to the low domestic demand and the slow development of the traditional sales countries. Limiting a large government debt and high inflation also holds back a rapid expansion of the economy.

In March 1995 a policy of economic reform was initiated by the government. This so-called ‘Bokros package’ aimed at stabilizing the economy and reducing government budget and current account deficits. At this time, the civilians suffered greatly under this harsh but necessary package of measures. This inevitably caused domestic demand to fall, with a major impact on small and medium-sized enterprises.

After 1997, the measures paid off, GDP rose nearly five percent annually and inflation and unemployment declined. The Hungarian economy has therefore grown considerably in the last five years and in the coming years there will be a lot of investment in housing, expansion of the motorway network, innovation and tourism.

Budapest is the major engine behind the Hungarian economy, but the northwest, due to its favorable location, is also experiencing strong economic growth. Economic growth in the east of the country is lagging behind. Privatizing Hungarian business has been a task for the Hungarian privatization company ÁPV for the past decade. Most businesses were privatized in the early 1990s and are now nearing completion. By 2001, 1770 of the original 2000 state-owned companies had been privatized. The Hungarian electricity market has been privatized from 2003 and has been fully liberalized after joining the European Union. 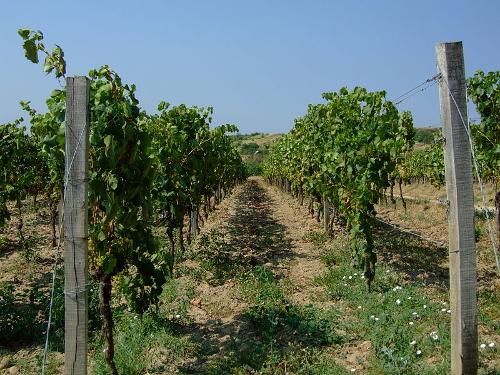 Around 1960 small-scale agriculture was transformed into the Soviet model with large state farms and large cooperatives. Almost 90% of the land became state-owned and 94% of the farmers worked for the state. However, this did not work well and the structure was changed quite a bit. Most production was left to the discretion of the local authorities. In this way the collective farms became partly autonomous again and a kind of free enterprise continued to exist in the provinces.

The cooperation between the cooperatives and private production appeared to work well. The transition to the free market economy in the early 1990s was not so great for small-scale farms. However, a difficult time came for the large-scale state-owned companies. The years of subsidizing these companies made mismanagement, capital destruction and a lack of efficiency commonplace. The conversion therefore resulted in a great loss of jobs.

Due to the favorable climate and fertile agricultural land, agriculture is still an important economic sector. It is remarkable that Hungary is self-sufficient in almost all crops. The main products are cereals, corn, rice, vegetables, wine and fruits. Sugar beet and sunflowers are also grown on a large scale.

Approximately 50% of the 4.7 million hectares of agricultural land is used effectively. Agriculture has suffered severe drought in recent years, followed by floods, and thousands of small farms have gone bankrupt.

In livestock, Hungary has focused on the breeding and fattening of slaughter cattle, mainly for export to countries of the European Union.

The economic transformation process led, among other things, to a sharp increase in the price of animal feed. As a result, Hungarian meat became more expensive, which in turn caused a decline in international meat sales. 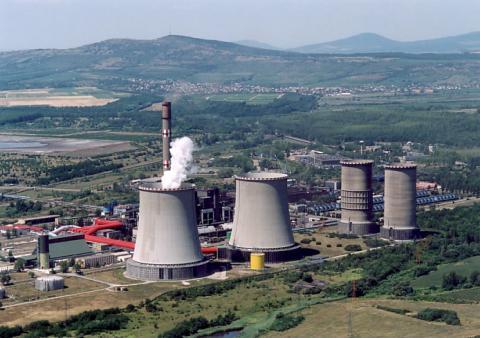 Hungary is poor in raw materials and the mining sector is therefore of limited importance. The last iron ore mine was closed in 1986, so that all iron ore had to be imported. Coal is mined at Pécs (also the source of uranium) and Komló, lignite at Ajka (Bakony forest), Tatabánya (Vértes mountains), Dorog, Tokod and in the province of Borsod-Abaújute-Zemplénemplénya. The coal has to be mined at great depth and that makes the coal expensive. Coal production has therefore been declining for years, to less than 70% of the production in 1989.

Petroleum is extracted in the province of Zala and in the Mátra and Bükk hills, natural gas in Eastern Hungary and Zala. The most important mineral, however, is bauxite, at Gánt in the Vértes Mountains, Iszkaszentgyörgy and in the Bakony Forest.

Bauxite mines are also in serious crisis. Lignite is mainly used as a fuel in power plants;there are dams in the Raab, Danube, Hernád and Tisza. Paks has a nuclear power plant.

Due to the lack of natural raw materials, approx. 50% of the total amount of energy required is imported. Hungary provides approximately 25% of its own oil needs. In order to be less dependent on oil, for example, oil-fired power stations are being converted to coal-fired power stations. However, production from the current four outdated power stations is continuing to decline and new power stations will no longer be built. The problem of nuclear waste is also still not solved.

The Hungarian oil and gas reserves are in the Alföld region. The oil reserves are estimated at 58 million tons and the gas reserves at 113 billion m3. Three quarters of the oil needed is imported, mainly from Russia. 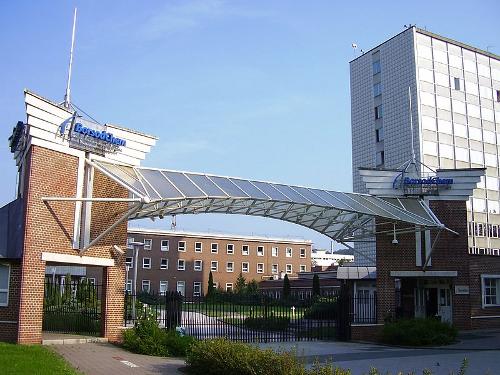 The Hungarian industry is increasingly focusing on exports. Many foreign investors also set up factories to export from there. The industrial sector is currently growing much faster than agriculture or the services sector and is in fact the engine behind economic growth. Consumer electronics and the automotive industry are the fastest growing sectors.

The fact that industrial production is growing so fast is partly due to the favorable geographical location in Europe and the well-trained labor market. concentrated in and around Budapest.

Some other industrial areas are: 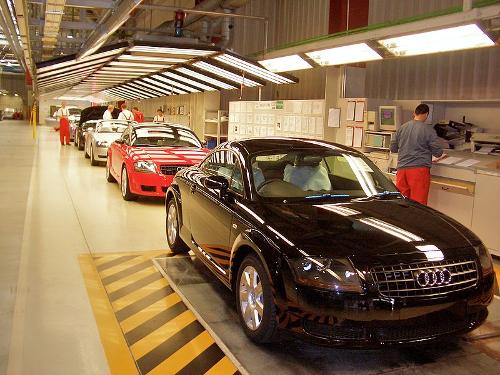 After industry, agriculture and trade, construction is an important sector in Hungary. About 5% of the working population works in mostly private companies. The large Hungarian construction companies are focusing on foreign countries due to a lack of large domestic orders.

Road and hydraulic engineering has not experienced spectacular growth in recent years, but due to large projects that are in the pipeline, this will be very likely to change. There is also a high demand for new warehouses and distribution halls due to Hungary's aim to develop into the regional transport center with a distribution function.

Hungarian exports are mainly carried out by multinationals and are mainly aimed at the European Union.

Small cheap cars are the most commonly bought but rising incomes make the market for larger and luxury cars more interesting. Most of the production of the car factories in Hungary is exported.

Approx. 80% of the automotive industry is in the hands of large, mostly German, foreign multinationals. 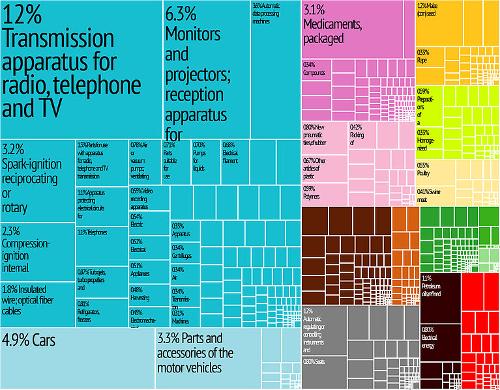 Foreign trade is developing well in Hungary due to two important factors: Hungary has few or no raw materials and there are many foreign companies that use Hungary as a production location for goods that are mainly sold on the Western European market.

Exports reached a record $ 98.7 billion in 2017 and imports amounted to 96.3.5 billion euros. The surplus in the trade balance is good for the Hungarian economy.

In recent years, mainly manufactured goods, machinery and transport equipment have been exported. Food, drink and tobacco, on the other hand, fell sharply and now represent only a small part of the total. 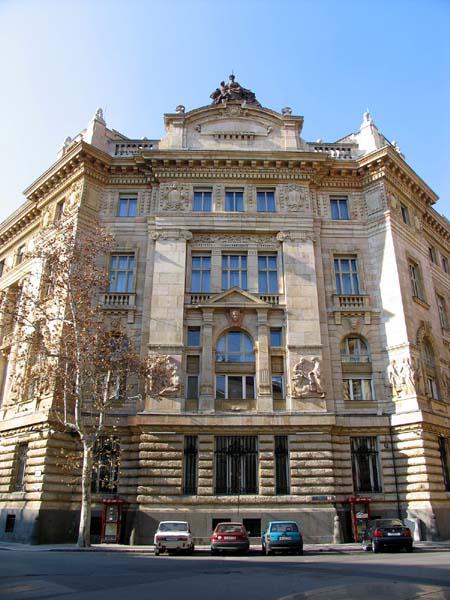 The Hungarian banking system was already somewhat reformed in 1987. Then the monopoly of the National Bank of Hungary was lifted and three new banks were established: the Hungarian Credit Bank, the Commercial and Credit Bank and the Budapest Bank. From 1989 onwards they were allowed to offer almost all financial services to their customers. In the mid-1990s, 1.8 billion euros in bad loans were rationalized, putting the banks in a financially healthy position. The ongoing privatization process is now mainly targeting the smaller banks. The lack of infrastructure has never received much attention from the Hungarian government, with the result that railways, roads and telephone connections have been neglected. The spearhead of policy is now the restoration and expansion of the road and rail network because Hungary would like to see a role for itself as a transport and distribution center for Central and Eastern Europe. New motorways are currently being built and railway lines are being modernized. It is even planned to expand the motorway network by 600 kilometers in five years and to connect it to the European motorway network.

Hungary has approximately 30,000 km of roads (of which over 270 km of motorway), almost 8,000 km of railway (2,184 km of which are electrified), more than 1,600 km of navigable waterways and almost 7,000 km of pipeline (two oil pipelines and a gas pipeline provide a connection to Russia). Freight transport is increasingly taking place by road by a large number of small transport companies.
In passenger transport the railways are the most important, followed by intercity buses. Due to the lack of expansion and modernization, the railways are currently the least efficient means of transport and freight transport is increasingly taking place by road. Domestic aviation has existed since 1970. The Hungarian airline Malév is based at the recently renovated Ferihegy Airport, one of the most modern in Central Europe, but Hungary's only international airport.