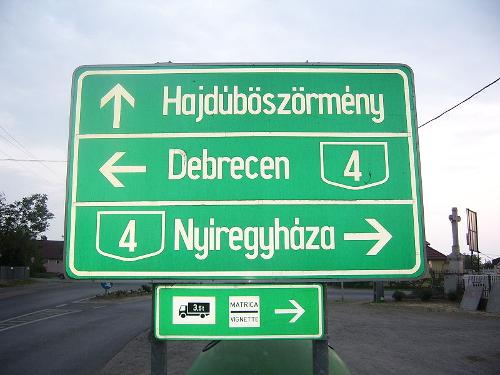 The Hungarian, or Magyar language, is a language belonging to the Ugrian branch of the Finno-Ugrian language group. Hungarian is in no way like French, German, English or most other European languages. Related languages include Finnish, Sami (language of the Sami or Lappen), Estonian and Karelian, a total of some fifteen languages, all spoken in northern regions from Western Siberia to Norway. Hungarian is geographically the only odd man out.

Hungarian has already included Turkish, Iranian and Germanic words in prehistoric times, and from 900 very many Slavic and German words. Furthermore, over the centuries much has been borrowed from Latin, Italian, French and English (kempingek = campsites).

The “A magyar nyelvértelmezöszótára” (= Glossary of the Hungarian language, 1959-1962) contains approximately 53,000 words. The emphasis is always on the first syllable of a word or first word of a sentence. This makes Hungarian sound a bit monotonous. Many words have been borrowed from Hungarian by neighboring peoples and a few have become international, such as carriage, hussar, dolman and gypsy. Their names have also been adopted with many Hungarian objects, such as paprika and goulash.

The Hungarian regional languages do not differ very much from each other. There are, however, clear differences in pronunciation; morphological and lexicological differences are marginal. The main difference from the standard language is the dialect of the Szeklers, originally Hungarians, but now living in Transylvania, Romania. Striking morphological (way in which words are formed in a language) deviations has the dialect of the Palotzen in northwestern Hungary. Furthermore, Hungarian is spoken in Slovakia, Ukraine (Ruthenia), Serbia (Vojvodina) and by many emigrants in Australia and North America (more than one million !!).

Other languages are also spoken in Hungary by the minorities living in the country, such as Germans, Slovaks, Wends, Jews, Serbs, Croats, Romanians and Gypsies. These population groups are almost all bilingual. 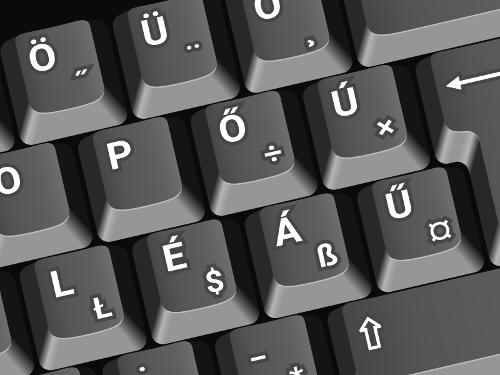 Detail of Hungarian KeyboardPhoto:Liggliluff CC 4.0 International no changes made

The Hungarian alphabet has the same letters as in most european languages, except for q, w and x, which occasionally show up in loan words and family names. Hungarian does have a number of letters with special sounds, cs, dzs, gy, ly, ny, ö, sz, ty,ü, and zs. However, these letter combinations do count as one letter and therefore have their own place in the Hungarian alphabet. There is also a long form of all vowels: á, é, í, ó, o, ú, and u.

Hungarian does not have a grammatical gender, but it does have a large number of cases in the form of suffixes (suffixes), which also replace prepositions.

For the Great Hungarian Plain, the pronunciation of theöcharacteristic for the e (Szeged is pronounced Söged there).

Some words and expressions: