From 1949 to October 1989, Hungary was a socialist people's republic, After that, Hungary became an independent, democratic state based on a multiparty system (30 parties in the first elections), in which the values of civil democracy and democratic socialism equally represented to be. Hungary is a fairly stable country politically. No democratically elected government has ever been sent home prematurely.

The 21-member presidential council has been replaced by a state president, who is elected by parliament for a four-year term, renewable once for another four years. In fact, the president has only a ceremonial office.

Supreme legislative power rests with the National Assembly or Országgyülé, whose 386 members are directly elected for a five-year term. Executive power rests with the cabinet, which is controlled by parliament. The prime minister elects the other members of the government. All Hungarians have the right to vote from the age of eighteen and the electoral threshold for political parties is 5%. For the current political situation see chapter history. 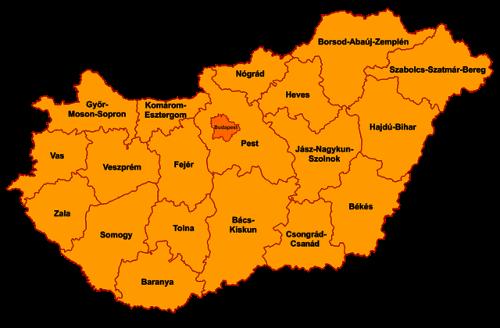 Provinces (Counties) of HungaryPhoto: Bordakm CC 4.0 International no changes made

Hungary is divided into 19 provinces or districts (megyék), 128 districts and 3,199 municipalities. They are governed by elected councils elected for a term of four years;day-to-day management is in the hands of executive committees, which are elected and supervised by the governing councils.

In addition, there are five city regions, also provincial capitals, at the administrative level of the megyék. Budapest with 22 megyék councils and a central city council occupies a separate position.