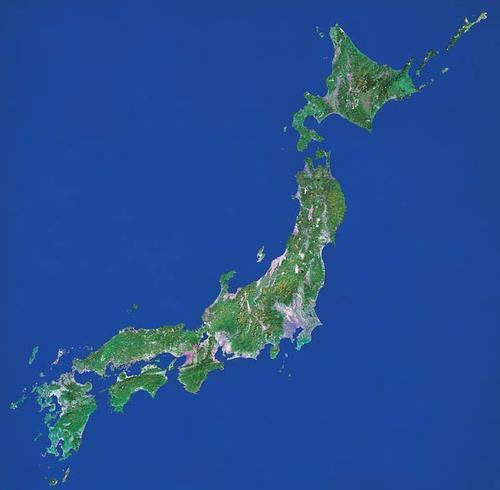 Okinawa is one of the Ryukyu Islands located 685 kilometers south of Kyushu, and stands out because it completely differs from the rest of the country.

Japan spreads out from the island of Sakhalin off the coast of Siberia to South Korea, and via the Ryukyu Islands continuously to Taiwan. To the west of Japan are the Japanese and East China Seas, and to the east is the Pacific or Pacific Ocean. The Pacific Ocean in Japan is deep between 8,000 to 10,000 meters and the Japan Sea has a depth of about 3000 meters.

The distance from north to south is 2790 kilometers and the total coastline is approximately 29,000 kilometers long. The greatest width of the Japanese islands is only 270 kilometers. The country's total land area is 377,812 km2.

Three quarters of the islands consist of often densely forested mountains and hills, but most of the mountains and ridges do not rise above 2000 meters. An exception is the Hida Mountains or the Japanese Alps (more than twenty peaks above 3000 meters) in South Honshu, which is on average 3000 meters high. 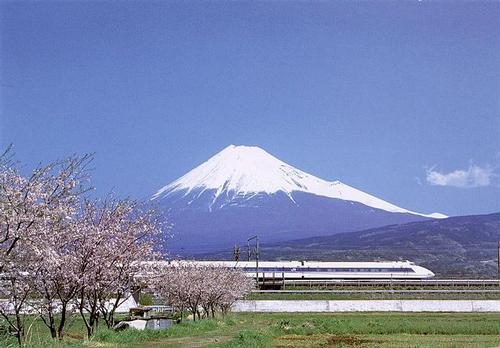 Other high mountains on Honshu are the Ontake-san (3185 meters), the Norikuradake (3166 meters), the Tateyama (2936 meters) and the Washigadake (2880 meters). Flat land with slopes less than 15°, river deltas and valleys takes up only about 25% of the total area.

Japan has more than 240 volcanoes, among which more than 50 are still active. The three main volcanic zones are in Hokkaido, in North and Central Honshu and in South Kyushu. The Aso on Kyushu is the largest caldera (funnel-shaped crater formed by collapse) in the world with a circumference of 114 kilometers.

Due to the tectonic and volcanic conditions, there are many seaquakes in Japan in addition to countless earthquakes. The coastal plains are then ravaged by enormous tidal waves (tsunamis), which can reach a height of up to 30 meters. Japan rests on an unstable base because it lies at the intersection of the Eurasian plate, the Pacific plate and the Philippine plate. The Pacific plate slides a few centimeters below the continental plate on which Japan lies every year. It will be clear that this inevitably leads to earthquakes. On average, more than 1000 earthquakes occur per year, and major earthquakes occur on average once every five years. Japan is the most seismically active area in the world. On September 1, 1923, Tokyo and its distant environs were devastated by the massive earthquake of 8.2 on the Richter scale, Great Kanto earthquake, killing more than 100,000 people. A major earthquake hit Kobe on January 17, 1995 with a magnitude of 7.2 on the Richter scale. About 5,000 people died and the earthquake is referred to as the great Hanshin earthquake. 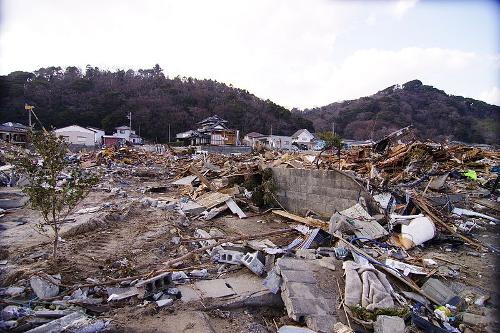 The last major quake was in 2011. This earthquake was followed by a devastating Tsunami.

Japan is particularly rich in mineral resources due to geothermal activities, including sulfur and radium. The so-called ría-coasts are strongly divided by tectonic fault zones and valleys. Low plains are generally small and almost non-existent. They often lie along the coast as alluvial river plains; some occur in the interior.

The short and often very rough rivers transport enormous amounts of rock to the estuaries. Due to the great decline, they are hardly navigable by large shipping, but they are very important for irrigation and the electricity production. The riverbeds lie in the plain mostly above the surrounding land and are kept in place by natural or artificial dikes. The longest river is the Shinano of approximately 375 kilometers. Other major rivers are the Ishikari (365 km) and the Tone (320 km).

Of the few lakes, the largest (675 km2) and best known is Lake Biwa near Kyoto. The Muasu lake is special, where you can see to a depth of 40 meters.