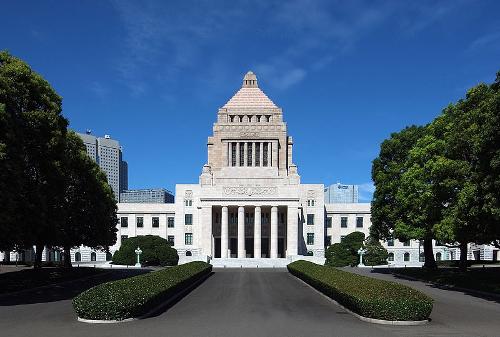 The Emperor appoints the Prime Minister, who is, however, appointed by Parliament, and the Chief Justice of the Supreme Court, who is appointed by the Cabinet. His duties also include promulgating laws and treaties and awarding awards.

Japan was the first country in Asia to have a parliamentary system. The current parliament or Kokkai comprises two Houses: the House of Representatives (Shugi-in) with 511 members, elected for four years, and the House of Lords (Sangi-in) with 252 members, being elected for six years with half the number members is renewed every three years.

Executive power rests with the cabinet (Naikaku), the prime minister of which is appointed by both chambers. The cabinet is answerable to parliament and not to the emperor.

All men and women over the age of 20 are entitled to vote.

The country is divided into eight main regions and 47 prefectures or todofuken. Prefectures are divided into districts or "gun", villages or "mura" and hamlets or "cho". Three prefectures have a separate status, namely the city prefectures of Osaka and Kyoto or "fu", and the capital area or "to", Tokyo. The governors of the prefectures and the mayors of cities and towns are elected by the local population. For the current political situation see chapter history. Japanese often describe their society as a "gaku-reki shakai", a society where someone's future is mainly determined with the highest possible education. The negative consequence of this is that a great deal of pressure is placed on the children at a young age. Often everything is done to get to the best rated schools.

Japan has developed a modern education system for this purpose, where a lot of money is invested by the government. More than 8% of the government budget goes to education.

State-run education up to three-year "junior" secondary school is compulsory and free of charge. In addition, many parents send their children to expensive private schools (juku) and institutions, juku's for primary education and yobikos for secondary education, which specialize in tutoring. They also prepare the students for the difficult entrance exams. Classes often have no more than 20 students.

Two-thirds of the children initially go to kindergarten, which is followed by a six-year primary school. There is very fierce competition. Some kindergartens associated with a university even require preschoolers to take entrance exams. This is followed by the three-year "junior" secondary school or chugakko, where general or vocational training can be followed. High school is not concluded with a final exam, but with a certificate. Performance-oriented education does yield results; approx. 94% of the children go on to secondary school and approx. 37% of them continue studying.

Higher education is provided by approximately 400 universities, junior colleges and technical institutes, which are partly public and partly private. The education system is clearly based on the American system. To be admitted to a university, a difficult entrance exam must first be passed. If students succeeded, they were almost assured of their final diploma until recently. At the moment, however, employers are demanding more and more of the students and a Japanese student puts as much time into his studies as a Western student. University studies require four years, but there is also a shorter version of two years, mainly followed by girls.

Most high school students, both boys and girls, wear a uniform. Girls a dark blue uniform and a white blouse or shirt with long sleeves and boys a black uniform with gilded buttons and a cap.