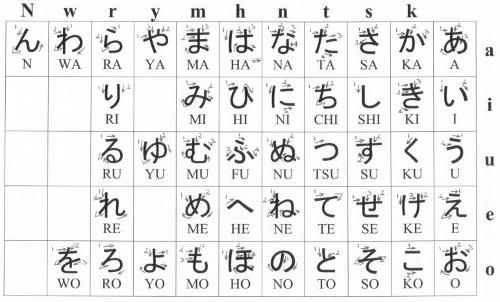 The official language is Japanese or hyojungo, which belongs to the Altaic language family, which also includes Mongol and Turkic languages. On the other hand, the sound system is closely related to Malay-Polynesian languages.

Japanese is not related to Chinese, but Korean has great similarities in structure.

However, all contacts between Japan and China over the centuries have adopted the Chinese script and many Chinese words. More than half of all Japanese words come from Chinese. The Chinese words and expressions pronounced in Japanese are called Sino-Japanese. It is remarkable that the letter L is missing, while the R is very common; in Chinese it is the other way around.

Many words were also borrowed from other languages between the sixteenth and nineteenth centuries, such as Sanskrit, Portuguese, Spanish and Dutch.

Examples of words derived from Dutch are:

Furthermore, many technical terms have been adopted from the English language. Most Japanese girl names end in "ko", which means little or child.

As far as grammar and spelling are concerned, it is striking that there is no grammatical gender, no articles and almost no distinction between singular and plural. The different persons are also indistinguishable for verbs, e.g. ikoe can mean I'm going, he is going or she is going.

The Chinese characters, called kanji, each representing a word or concept, were used by the Japanese according to the meaning and the sound. Thus, a Chinese character meaning "calculate" could be used in this sense as well as to represent the syllable ke, the Sino-Japanese pronunciation of the character.

A syllable script called hiragana probably emerged from the characters used phonetically in the 9th century. The hiragana consist of quickly written, often strongly abbreviated Chinese characters. It is written from top to bottom and is the foundation of grammar. Later, another syllable script emerged, katakana, consisting of portions of phonetically used Chinese characters. Katakana runs horizontally or vertically and is mainly used for writing foreign names.

Japanese is so difficult that if one knows about 2000 ideograms, one belongs to the literate. The Hepburn system is usually used for Western transcription of Japanese. The Japanese use western numbers when writing. Furthermore, three colloquial languages are distinguished: East Japanese, which is spoken from Tokyo to Honshu in the north, West Japanese, which follows the west coast to Shikoku, and the Kyushu dialect to the south.

The name Nihon or Nippon was first used in the early 7th century and in 645 it became the official designation for the country. The Sino-Japanese compound Nihon / Nippon (Chinese: Riben; Sino-Korean: Ilbon) means "origin (ben) of the sun (ri)", so: (Land of) the Rising Sun. In the 8th century, the name Riben was often used in China. The European names Japan, Japon, Japão, Giappone, etc. also go back to the Chinese pronunciation (from Nihon): Riben, in the 13th century by Marco Polo as Zipangu (= Ribenguo, "Land of the Solar Origin") in Europe introduced. Until 1945, Japan was also often referred to as Dai-Nippon (Greater Japan).

Many Japanese, especially in rural areas, speak typical dialects called "ben". An example is the famous Kansai dialect, "kansai-ben". These dialects are difficult to understand for Japanese from other parts of the country.