Florida, the 'Sunshine State' and most southern state on the mainland of the United States, is an 850 km long peninsula, has a total area of 170,304 km², making it the 22nd in size state of the United States. From Key West in the south to Pensacola in the north, Florida stretches for about 1,342 km. 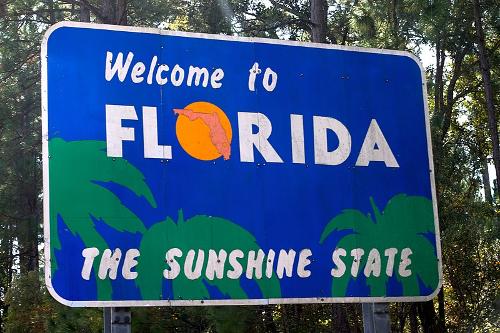 Florida is enclosed by the Atlantic Ocean on the east side, the Gulf of Mexico is its neighbor on the west side, the north of the state borders the states of Georgia and Alabama and finally the Atlantic Ocean and the Gulf of Mexico meet at the southern border from Florida. The coastline of the mainland of Florida extends over a total length of about 3000 km, making Florida the second largest coastline after Alaska. If all islands are included, Florida even has a coastline of 13,600 km.

In northwest Florida there is a narrow strip of land that is also called the Panhandle (= pan handle). Between Florida (Keys) and Cuba lies the Straits of Florida (also called Florida Straits or Florida Strait), a maximum 180 km wide and 1800 meters deep strait that connects the Gulf of Mexico with the Atlantic Ocean. From a landscape point of view, Florida is a collection of islands, salt and freshwater swamps, an enormous artesian source area (Ocala National Forest), lagoons, wetlands and lakes. The state can be divided into four main scenic regions: the coastal areas of the Gulf Coast and of the Atlantic Ocean, the 'hilly' inland, the swampy Everglades in the far south and the Florida Keys, an archipelago of about 1,700 small islands.

The Florida landscape is generally very flat, Florida's highest hill is the 105-foot Britton Hill in Lakewood Park (Walton County) in the northwest of the state, and that hill is less than half the height of the highest building of Miami, which is 240 feet high. Florida is therefore officially the 'flattest' state in the United States. 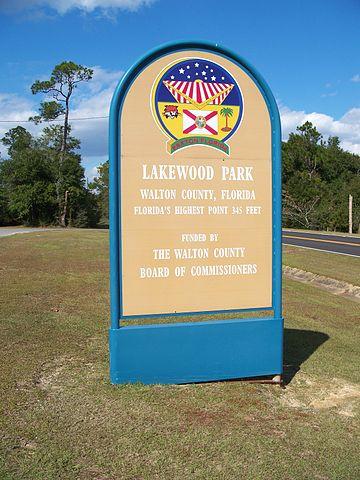 Especially south of Orlando it is very flat, although in a place like Clearwater there are hills of 15-30 meters high. In Central and Northern Florida, there are many ridges with heights between 30 and 76 meters from about 40 km from the exposed coast. The highest point on the Florida peninsula is 95-foot Sugerloaf Mountain in Lake County. But most of Florida has a height of less than 3.7 meters.

The largest freshwater lake in Florida and the seventh in the United States is Lake Okeechobee (also called The Lake, Florida's Inland Sea or The Big O) with an area of 1,900 km2, 50 km west of West Palm Beach in central Florida. Lake Okeechobee, averaging just 2.7 meters deep, is the second largest freshwater lake in any of the states of the United States after Lake Michigan. Lake Okeechobee is full of fish, especially trout bass. In the hilly area between Tallahassee and the Georgia border alone, there are thousands of large and small lakes. Countless islands lie off the extensive coast of the Panhandle. 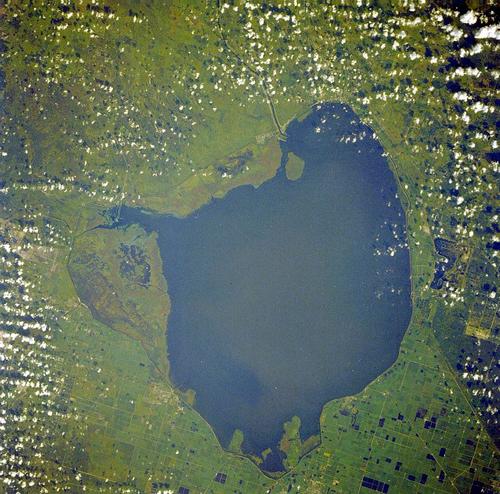 About 1,000 miles of the entire Florida coastline is made up of beaches, including the hard Atlantic beaches of coral limestone, the somewhat muller shells and coral limestone sands on the southern Gulf Coast and on Sanibel Island, and light alabaster quartz sand beaches on Santa Rosa Island. Sanibel Island's beaches have the highest concentration of shells worldwide.

Florida has an enormous underground system of caves filled with water, the so-called aquifers. These aquifers lie under approximately two-thirds of the surface of Florida, emerge as an artesian source in 320 places and then feed many rivers that flow into the Gulf of Mexico. The main source areas, Juniper Springs, Salt Springs (contains salt water), Alexander Springs and Silver Springs, are in the Ocala National Forest. In the north are Fanning Springs and Wakulla Springs.

From the sources of Silver Springs, about 2 billion liters of mineral rich and approx. 21 degrees Celsius warm water has been flowing daily for over 10,000 years. The caves are often in funnels that vary in depth from a few centimeters to hundreds of meters. Only a small number of these labyrinths have been scientifically researched. The Blue Spring is located in the Blue Spring State Park, where about 450 million liters of water are borne daily at a constant temperature of 20 ° C. Florida has a total of about 700 freshwater sources, 33 of which produce more than 100 ft³ (= 2831 liters) per second.

In the Florida Caverns State Park there are limestone caves at Marianna that are above the water table and can therefore be visited. Cave tours lead past the jagged limestone formations.

Another frequent phenomenon, particularly in North and Central Florida, is the sudden emergence of so-called dolines or sinkholes. The formation of a doline is gradual, but then due to the natural erosion of the limestone soil or after a heavy rain shower, a hole suddenly falls in the soil. 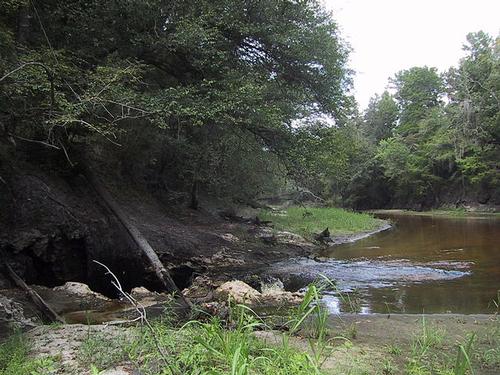 Sinkhole in the Alapaha RiverPhoto: Stewart Tomlinson in the public domain

Just an hour's drive south of Miami, the low wetlands of the Everglades (called the 'River of Grass' by the Indians) begin. Everglades National Park, Florida's largest wetland area, has been the only subtropical National Park on American soil since 1947. The landscape is approximately 6000 km2 (about the same size as the province of Friesland and only one-fifth of the total Everglades area), 80 km wide park, which is on average 2.4 meters above sea level, very diverse with of course a lot swamps, but also with islets, reed grass wetlands, humid savannah land, 'hammocks' (tree-covered mounds), rivers, cypress and mahogany forests. The watercourse of the Everglades flows at a slow speed of only about 35 meters per hour. There is about 1500 mm of precipitation in the Everglades annually, but there are big differences. In winter, when it is warm and dry, the water flow is even partially dry; in the humid summer, which lasts from May to October, the slow flow reaches a maximum depth of 35 cm.

Another large swamp area in North Florida is the Okefenokee Swamp, which is mostly in the state of Georgia. 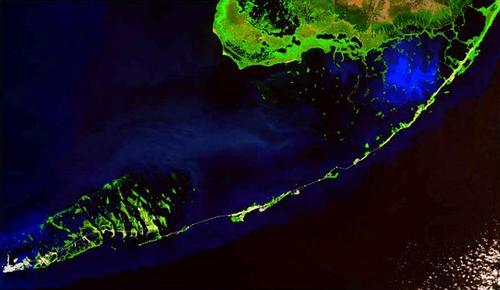 Florida Keys from spacePhoto: Terraprints/NASA CC 2.5 Generic no changes made

The Florida Keys islands, the Upper Keys (main inhabited island is Key Largo) in the north are closest to mainland Florida and the Lower Keys, which are lime or coral and overgrown with mangroves, stretch for a length about 180 km from Miami in northeast Florida to the south, then the chain of islands curves west to the Dry Tortugas in the Gulf of Mexico. Key West is the last inhabited island in the archipelago, just 150 km from the Cuban coast.