Northern and Central Florida have a humid subtropical climate; southern Florida has a tropical climate. Florida's rainy season lasts from May through October, with generally short thunderstorms with heavy rainfall. In late summer and early autumn, tropical low-pressure areas cause hurricanes, which are also accompanied by abundant rainfall.

In the course of October the dry season in Florida starts, in early October in the north and at the end of the month in the deep south. The dry season generally continues until the end of April. During the winter months, it can get very dry in Florida and residents should be careful with water use. Winter precipitation in the form of snow does not actually occur; sleet may fall in northern Florida, but never more than once every ten years.

The (warm) Gulf Stream runs through the Florida Straits towards Northeast Florida, which ensures that temperatures do not rise that high. Ocean water temperatures are nowhere higher in the mainland of the United States than in Florida. 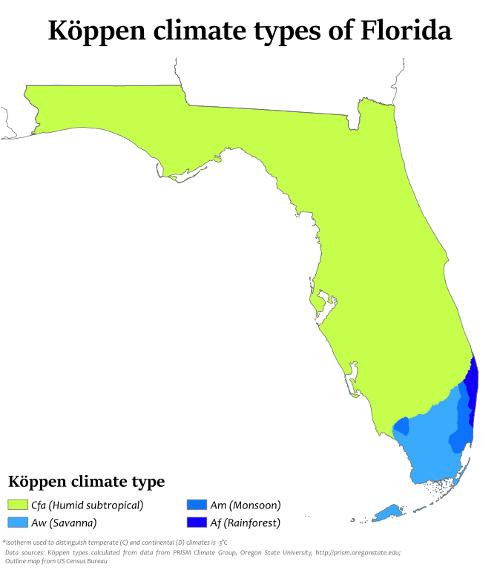 In the winter period, the wind generally blows from the north over the panhandle to the south towards Orlando. In the rest of Florida, the wind blows from changing directions. In summer, easterly and south-easterly winds usually blow across the peninsula. The west coast of Florida, near St. Petersburg, receives the most sunshine; an average of 361 days per year. October is the driest month of the year in the Panhandle and the wettest month for the Florida Keys. In the summer months, South Florida is wetter than North Florida, in the winter it is just the other way around. Nowhere in Florida does an average of more than 180 mm fall per month; August is on average the wettest month.

Although it feels warm and tropical in the Florida Keys, the temperature never exceeds 36 ° C and on average the midsummer 'only' reaches 31.5 ° C. The temperature in the Keys is therefore lower than in the more northerly Miami, partly due to the surrounding ocean and the refreshing ocean wind. It hardly gets colder than 10-15 ° V and the water temperature is between 26.5 and 30 ° C for a large part of the year.

In the summer Florida is also sometimes covered by sand from the Sahara, carried by trade winds. Rain falls far than hardly, the sky turns white instead of blue and the number of red sunsets is increasing. Air quality is also declining in the southeast of the United States, which is normally one of the cleanest in the United States. More than 50% of Sahara sand travels across Florida, and since 1970 this has been exacerbated by increasing drought in Africa.

The Atlantic hurricane season lasts from June 1 to November 30, with the most dangerous months being August and September, and Florida is hit by an average of about seven hurricanes. That Florida is regularly hit by devastating hurricanes is a certainty, however, it is not yet possible to predict the exact force and the correct trajectory by the U.S. National Hurricane Center.

Hurricanes are created by a combination of circumstances. First of all, sun-heated water in the Eastern Atlantic Ocean evaporates and rises. This moist warm air then condenses, forming towers of clouds that are miles high. Due to the rotation of the earth, the cloud tower is whirling more and more counter-clockwise around its axis, the famous windless eye of the hurricane. At some point, the cloud tower begins to move westward with increasing force and speed, often toward the Caribbean and the southeast coast of the United States.

The heaviest hurricanes reach speeds of over 300 km per hour and the associated cloud field is sometimes 500-600 km in diameter. The Florida coast is also often hit by meter-high waves and gigantic downpours, causing devastating flooding. Hurricanes are classified into five categories on the Saffir-Simpson scale, with category five being the heaviest hurricane with winds in excess of 150 miles per hour. Hurricanes are on average 480 km wide, rise 15-18 km above the ocean surface and reach speeds between 15-70 km per hour.

The biggest documented natural disasters to hit Florida were hurricanes. In 1928, more than 2,000 Florida residents drowned in the flooding of Lake Okeechobee. On Labor Day in 1935, the Florida Keys were hit by a hurricane (Labor Day Hurricane, Category 5) that killed about 400 people and destroyed the Overseas Railroad (also known as Florida Overseas Railroad or Overseas Extension). In August 1992, Hurricane Andrew (Category 4) entered Florida just south of Miami, killing 65 and causing a total loss of more than $30 billion. In 2004 Florida was hit by no less than four hurricanes and that was not without major consequences, 20 deaths and 20 billion euros in damage.

How do hurricanes get their name

The hurricanes all have names, meteorologists soon found that giving hurricanes names improved communication about the storm and even increased safety. The Spanish began to name the impending hurricane after the saint of that day. During World War II, meteorologists gave the hurricanes their girlfriend's first name and only much later, under pressure from feminists in the United States, men's and women's names are used alternately.

Today, a list of names is established before hurricane season begins. The U.S. National Hurricane Center in Miami started this in 1950 and this task has been taken over by the World Meteorological Organization in Geneva, Switzerland.

In 1950 hurricanes were named according to the phonetic alphabet, so for example Able, Baker, Charlie etc. The next hurricane season started with Able and so on. In 1953, to avoid misunderstandings, the naming system was changed and hurricanes were saddled with women's names. From 1979 the current system was used with alternately female and male first names. In total there are six of the lists below, which means that these names will be next in six years' time. An exception are hurricanes with a devastating effect, such as Katrina, which hit New Orleans (2007). The name Katrina was subsequently removed from the list.