New Zealand has 4,510,327 inhabitants (2017). The average population density is approximately 16.4 inhabitants per km2. Approx. 75% of the population lives on the North Island and more than 1.5 million people live in the Auckland conurbation alone. The capital Wellington has approximately 411,000 inhabitants. The largest cities on the South Island are Christchurch, the island capital and Dunedin. About 86% of the population lives in urbanized areas. The annual population increase was 0.79% (2017). The population structure is as follows: 0-14 years 20%, 15-64 years 65%, 65+ 15%. The birth and death rates are 13.2 and 7.5 per 1000 inhabitants, respectively. Life expectancy is 79 years for men and 83.5 years for women.

The two main ethnic groups are the whites of European, mainly British, origin (71.2%) and the Maori, the original inhabitants (14.1%). British were allowed to emigrate to New Zealand until 1974 if they wanted to. Approx. 7.6% of the population is of Polynesian descent. Most Maoris live on the North Island (approx. 90%). Due to a high birth rate and improved living conditions, the number of Maoris is increasing rapidly. On the other hand, the number of purebred Maoris is decreasing due to the increasing number of mixed marriages. After the Second World War there has been a significant immigration of Dutch (about 35,000 emigrants), Danes and Italians and since the 1970s mainly Australians and Asians. In addition, there are smaller groups of Chinese, Indians and other Polynesians.
The last wave of emigrants from Asia mostly concerned wealthy people from Hong Kong who sought refuge after the return of Hong Kong to the People's Republic of China. A special group are the more than one hundred thousand immigrants from Pacific islands, all looking for work that they often do not find. Emigration to Australia is increasing in the hope of better working and living conditions.

Ancestor worship is still important in traditional Maori society. The many gods represent things like war, heaven, sea and mountains. Other important parts of the religion are the life force (mairu), the spirit (wairua) and the spiritual force (mana). For the past two centuries, Christianity has had a profound influence on the ancient Maori traditions, and by the 1840s almost all Maoris were converted to the Christian faith.
Major male Maoris still have tattoos on parts of the body. Women only have tattoos on the face. 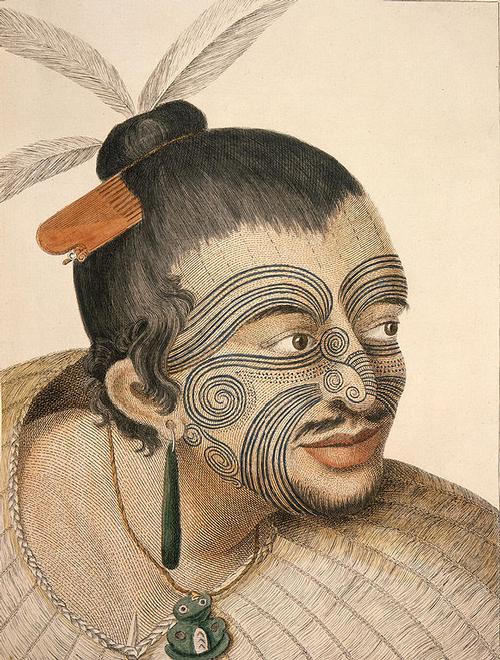 The traditional Maori society is made up of about 50 tribes named after the canoes that brought their ancestors to New Zealand. The Maori were traditionally warriors, but they also worked on the land and hunted. All members of a tribe jointly owned the territory in which they lived. In the middle of all the villages was the "marae", an open courtyard central to social life. In that area there was always a kind of community house or "whare runanga". The Maoris believe that the ancestors also reside in this house. There used to be a clear division into classes, namely nobility, priests and slaves. 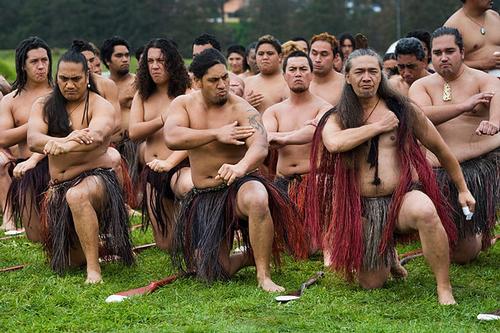 Today, the Maoris are integrated into New Zealand society. Telling stories about historical events from generation to generation is of great importance to Maori society. Song, dance, music, certain gestures and poetry are also important here. Making artistic wood carvings has always been a specialty of the Maoris. Textile processing and jewelry making are also popular. The Maoris greet each other by pressing their noses together. This way of greeting is called "hongi".

The increasing guilt awareness of the whites has developed a self-awareness called "Maoritanga" which means that people are proud of their own cultural heritage. When the first whites arrived, the maoris called themselves "tangata maori" which means "the common people". The whites, on the other hand, they called "pakeha", non-Maoris. The social position of most Maoris is currently not so good. Nearly half of the Maoris receive government support and a quarter earn only NZ $ 400 a week. Only a small number have a leading position in government or business. The number of academically trained Maoris is also small. It is clear that this often leads to problems between the Maoris and the white population of New Zealand. The issue of land rights has dominated the relationship between the government and the Maoris since the nineteenth century. In fact, by the Treaty of Waitangi in 1840, the Maoris were expropriated from their land. They themselves thought that they only gave the British the right to govern their country. The Waitangi Tribunal was established in 1994 and efforts were made to resolve the problem definitively. Despite a number of statements and commitments, a final settlement is not yet in sight.