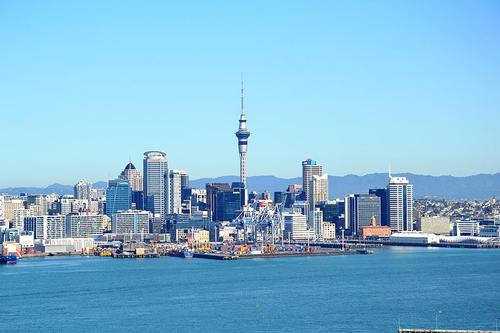 Auckland is the largest city and the largest port in New Zealand. Auckland is located in the central part of North Island, on a narrow isthmus between two ports. Auckland was founded in 1840 by William Hobson as the capital of the colonial government, and the city was named after George Eden, Earl of Auckland. In 1865 Wellington became the capital of New Zealand. Auckland has the largest number of Maoris in the country. The Auckland metropolitan area is the most populous area in New Zealand with 1,354,900 inhabitants. Auckland's name in the Maori language is Tamaki Makaurau.

Auckland is located on and around a narrow strip of land, less than two kilometers wide at its narrowest point, between Mangere Inlet and the Tamaki River. There are two ports around the isthmus: Waitemata Harbor on the Pacific Ocean in the north and Manukau Harbor on the Tasman Sea in the south. It is one of the few cities in the world with two ports that belong to two separate seas. Numerous bridges span both ports. 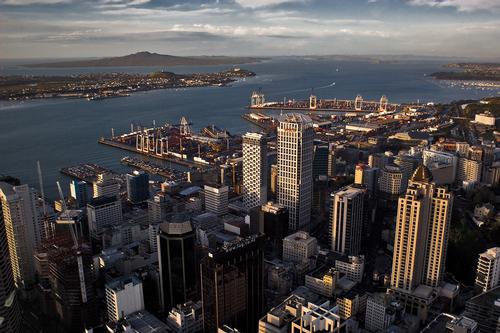 Auckland is located at the Auckland volcanic field with about 50 volcanoes. There are different shapes with cones, lakes, lagoons and islands. Some volcanoes are still working, but the majority are extinct or asleep. Rangitoto is the largest volcano, formed in the last 1000 years. The size and symmetry of this volcano and its position at the entrance to Waitemata Harbor make it a symbol of Auckland's nature.

Auckland has a moderate maritime climate, with warm, humid summers and mild, humid winters. The city is the warmest and sunniest city in New Zealand, with an average of 2060 hours of sunshine a year. The average daily maximum temperature is 23.7 °C in February and 14.5 °C in July. West Auckland once recorded a maximum temperature of 34 °C. The different parts of the city sometimes have different climatic conditions. Snow is extremely rare in Auckland and generally does not remain on the ground.

The Maoris lived on the site of today's Auckland around 1350, because the land on the isthmus was rich and fertile. The Maoris had built fortified villages on the volcanic peaks. About 20,000 Maoris lived in this area. The Tainui and Ngati Whatua were the two main Maori tribes living in the area. 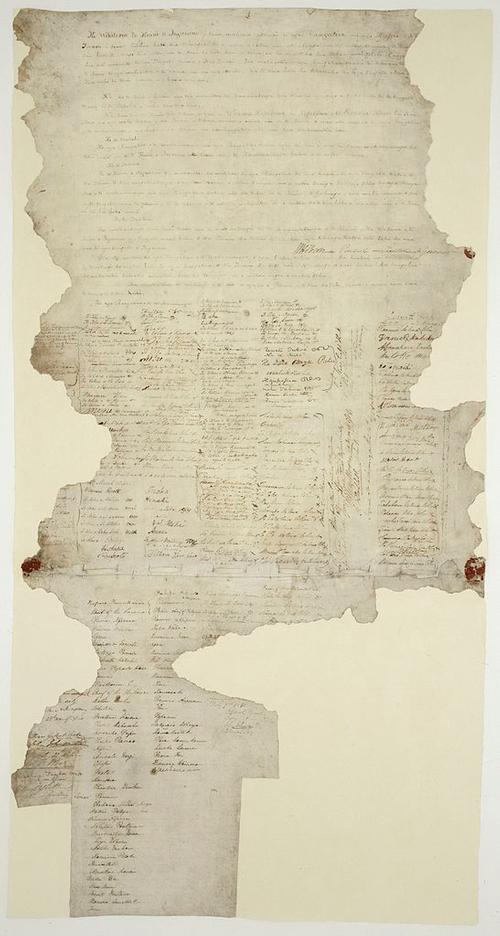 That number was already greatly reduced when Europeans settled in Auckland. This was initially accompanied by violence and skirmishes. The Maoris could not compete with the firearms of the Europeans. The fighting ended after the Treaty of Waitangi was signed in February 1840. 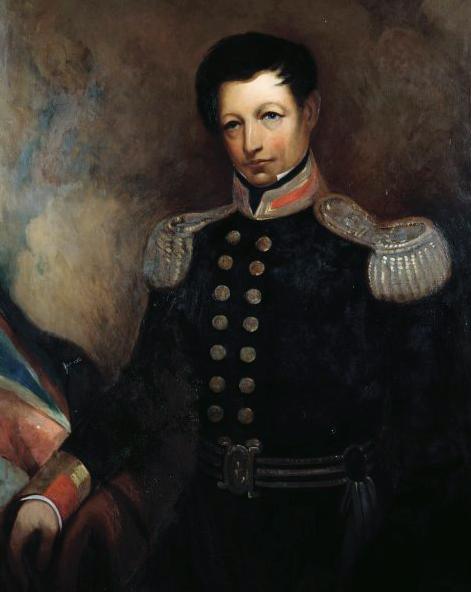 After this, New Zealand's new governor, William Hobson, chose the area as his new capital. Auckland held that status for two decades, when the capital was moved to Wellington in 1865, due to its more central location.

Although most of New Zealand's early settlements were located on South Island, Auckland grew into New Zealand's commercial capital in the late 1800s. The port area around Commercial Bay grew rapidly, became overcrowded and suffered from the usual problems associated with rapid growth. 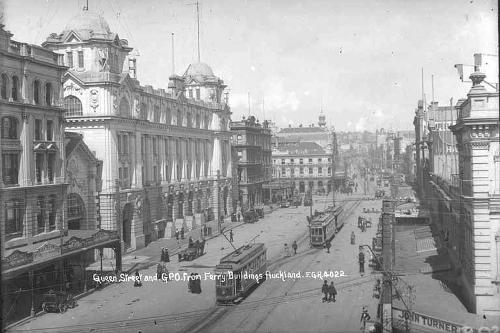 Queenstreet in Auckland in 1919Photo: Frederick George Radcliffe in the public domain

At the beginning of the 20th century, Auckland was already developing the suburbs due to the growing population. Much of Auckland has a suburban lifestyle with a low population density. The city center was opened up by a system of modern trams, trains and ferries. Auckland residents, like the rest of the New Zealand population, prefer to live in detached single-family homes and the city is relatively sparsely populated today. 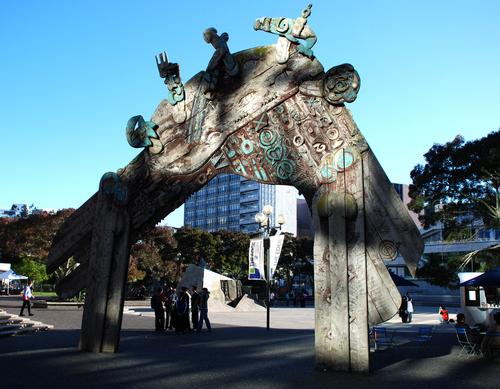 Aotea Square in AucklandPhoto: Phillip Capper (CC BY 2.0) no changes made

Auckland is an attractive city to visit. The Aotea Square is the heart of downtown Auckland and the venue for craft markets and art festivals. St Patrick's Cathedral is Auckland's Catholic Cathedral. The church has striking Gothic architecture with an enormous attention to detail, including a carved wooden ceiling. Eden Park is the city's largest stadium and the battleground of the 2012 Rugby World Cup Final. Karangahape Road is known as "K" Road". It is a street in the center of Upper Auckland and famous for its bars, clubs, smaller shops and red-light district. Auckland's best known attractions are described below: 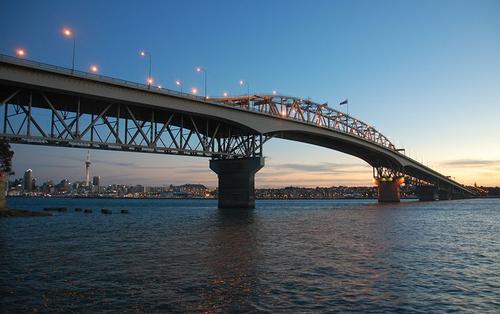 The Harbor Bridge connects Central Auckland to the North Shore and is a symbol of Auckland. The bridge dates from the late 1950s. The bridge spans 1020 meters.

Auckland Town Hall was built in the early 20th century in striking Italian-style architecture. The town hall is still in use and has a concert hall with great acoustics, making it one of the most famous concert halls in the world. 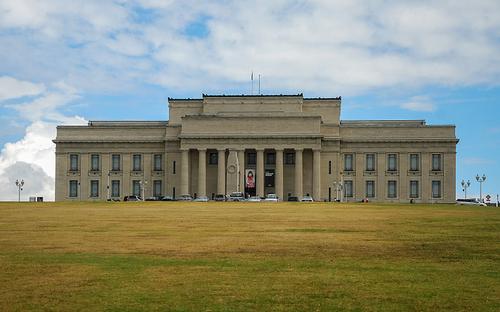 The Auckland War Memorial Museum is a large museum with many exhibitions, built in an impressive neoclassical style. The museum has a large collection of New Zealand history and an extensive collection of weapons.

Underwater World Kelly Tarlton's is a well-known aquarium in the eastern suburb of Mission Bay, overlooking Waitemata harbor. You can see penguins, turtles, sharks, tropical fish, rays and other sea animals, especially the feeding of the animals is spectacular. It also houses a replica of Captain Robert Falcon Scott's cabin on his ill-fated expedition to Antarctica. 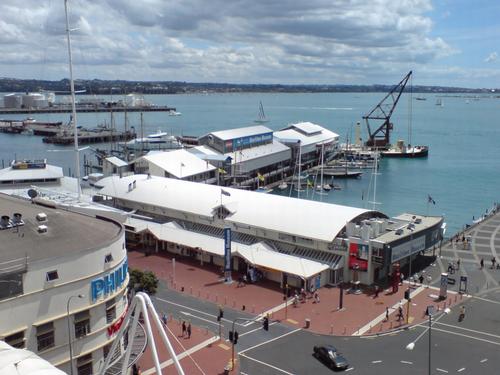 National Maritime Museum in AucklandPhoto: Ingolfson in the public domain

The New Zealand National Maritime Museum has interactive exhibits and collections related to New Zealand's maritime history and is located on Hobson Wharf. New Zealand has a special relationship with and dependence on the sea and this museum tells extensively about this. 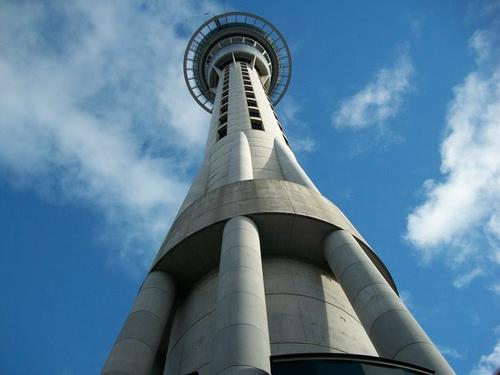 One of the tallest free-standing buildings in the Southern Hemisphere, the Sky Tower is 328 m high and offers excellent panoramic views of the city from a revolving restaurant. For the bravest among us there is the possibility to Bungee jumping. 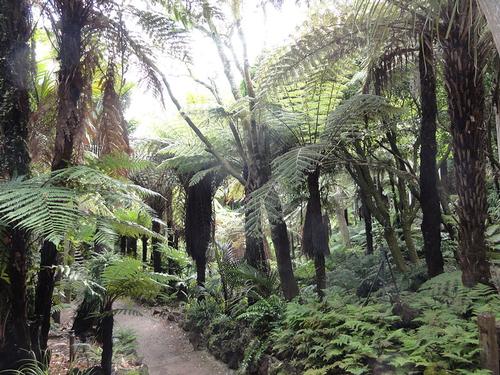 The Auckland Domain is one of the largest parks in the city and fun to visit. The park dates from the mid-19th century and is right next to the hospital. In the park you will find the beautiful winter gardens, next to the duck pond with impressive plants. 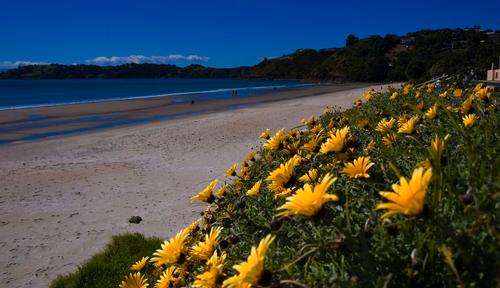 Waiheke Island iclose to AucklandPhoto: Trakesht at English Wikipedia CC 3.0 no changes made

Waiheke Island is the third largest island in the Hauraki Gulf and is known for its beaches, forests, vineyards and olive groves. It is one of the most visited islands near Auckland, with well-regarded vineyards and wineries, galleries, museums, craft shops, sandy beaches and a population of around 8000 people. 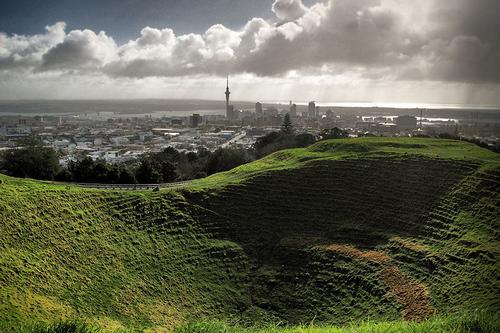 Mount Eden looking out over AucklandPhoto: Etherbug CC 3.0 Unported no changes made

Mount Eden is a volcanic cone with a grassy crater and the highest point in Auckland City. It offers fantastic views of Auckland and is very popular with tourists. Eden Gardens has beautiful mature trees, plants and shrubs.