More than 7% of New Zealand's surface is occupied by seven national parks and 1,300 nature reserves. In addition, the forest reserves cover 15% of the surface of the country. The largest national park is the Fiordland of Sounds National Park, on the South Island. The main forest reserve is the Waipoua Kauri Forest Sanctuary (900 ha), on the North Island, where the nearly eradicated kauri tree is maintained.
The Department of Conservation (DOC) manages and owns all National Parks, Maritime Parks and Forest Parks. The Westland, Fiordland, Mount Cook, Mount Aspiring and Tongariro National Parks are on the UNESCO World Heritage List.

The plant world of New Zealand is very species-rich and varied and has its own character due to the many endemic species. As many as 2,500 species are endemic, as are 1,450 of the 1,650 flower-bearing plants. All trees that lose their leaves in winter have been introduced while the native tree species are green all year round. The similarity with Australia's plant world is remarkably small. New Zealand is a transition between the plant kingdoms of Paleotropis and Antarctis; mainly because of the mountainous character of the country, Antarctic elements predominate on the South Island. The north of the North Island originally bore a dense, very rich, subtropical rainforest, the kauri forest, with more than 100 different tree species from 47 families; the kauri and Beilschmiedia tarairi are the most characteristic here. This forest is also very rich in tree ferns, epiphytes and lianas.
The kaurie tree is a fir tree and the second largest tree in the world after North American redwood. The tree does not mature until about 800 years. The largest kaurie in the world is located in the Waipoua Kauri Forest, called "Tane Manhuta" and is about 1200 years old, 52 meters high and 13 meters in size. The number of cowrie trees shrank rapidly in the seventeenth and eighteenth centuries and most forests had disappeared by then. Today it is a protected species and should not be cut down just like that. The "rimu" is a red pine tree that grows in mixed forests and can reach a height of about 25 meters. The totara was used by the Maoris for making canoes and for building houses. The kahikatea is a narrow white pine that can be found in swampy areas. Native trees are also the kaikawaka, the matai, the tawa, the rata, the rewarewa and the kamahi. The yellow flowers of Kowhai have been declared a national flower. Logging is often compensated by planting the California radiata trees. The pohutukawa or Christmastree is found in the northern coastal regions and the nikau palm, the southernmost palm species in the world, on the South Island. Botanically, the cabbagetree is not a tree, but a kind of lily. Much of the forests on North Island were wiped out as early as in the year 200 by an eruption of the Taupo volcano. When the first Europeans arrived, sixty percent of the country was still forest. Most native forests have now given way to grass and arable land. In the southern part of the North Island and the north of the South Island, the western rainforest is still largely intact. In the plains it is mainly characterized by Podocarpus and Dacrydium species. At a higher elevation, it will be replaced by deciduous Nothofagus forests, which will predominate in the south of the South Island. To the south, the forest is getting lower and lower, so that epiphytes and lianas eventually become "ground plants".

More than ninety types of ferns are found in New Zealand. Most common is the royal fern with a leaf that is dark green at the top and silver-colored at the bottom. This leaf is a national symbol. 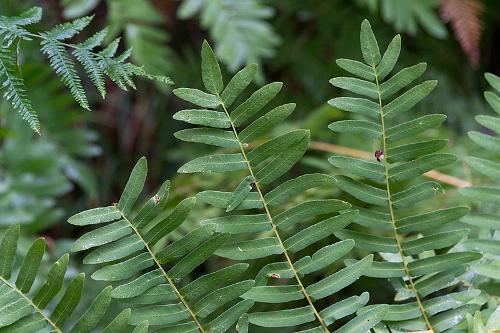 The tree ferns are the most impressive. The black mamaku can grow up to 20 meters in height and the ponga resembling the royal fern can grow up to 10 meters in length. Most plants have been imported by European settlers, such as foxglove, thistle, gorse, lupine and dog rose. Some of these species have become a real pest for sheep farmers, for example. The endemic New Zealand flax can be very common along rivers and in swamps. On the South Island, a very dense and highly branched scrub starts above 1200 meters, characterized by species of Dracophyllum (Epacridaceae), Olearia (Composite family) and Hoheria glabrata (Mallow family).
The alpine zone starts at 1350 meters, a semi-desert exposed to constant, strong winds. This is also home to the mountain daisy and gentian. Characteristic on the sparsely covered debris slopes are the New Zealand edelweiss (Leucogenes grandiceps), a white-flowering buttercup (Ranunculus buchanani), and Ourisia varieties of the figwort family. The Ranunculus buchanani is the largest buttercup in the world and is also called Mount Cook lily. 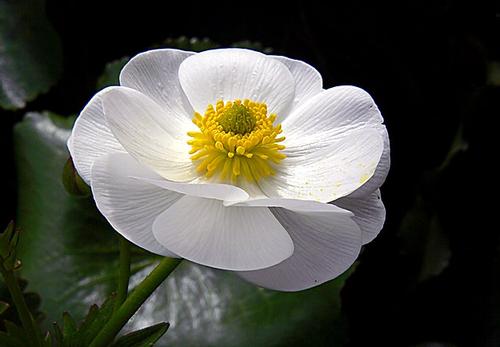 The dry eastern slopes of the South Island were originally covered with the "tussock" steppe, consisting mainly of Danthonia species, Festuca novaezelandiae and Poa colensoi. At higher altitudes, the increasingly thrifty grass alternates with very peculiar, xeromorphic, grassy umbellifers and composites, as well as heather-like shrub-like Hebe species of the figwort family. 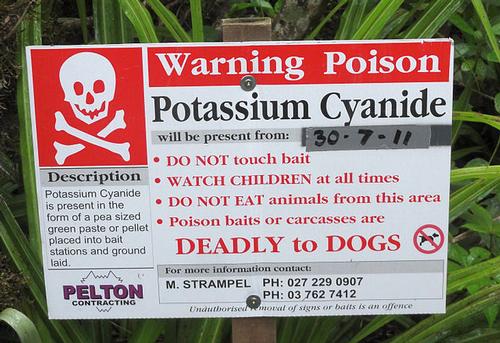 Possums are a real threat and are fought with poison in New ZealandPhoto: Andy king50 CC 3.0 Unported no changes made

All these animals can be hunted indefinitely to limit the damage they cause. The number of bird species was and is only limited, about 300 species. All these birds suddenly had many natural enemies, but despite that many native birds still live in New Zealand. Cutting down many forests also meant that a number of species are still threatened with extinction.

New Zealand has about 300 bird species, of which only about half can actually be labeled as breeding birds. The kiwi is the most famous bird in New Zealand. This wingless, almost blind bird is a nocturnal animal that feeds on berries, insects and worms. The female lays one egg which is incubated by the male. The national pride of New Zealand is in severe danger. The country once had twelve million of these birds, now it is only seventy thousand. It is feared that the kiwi will become extinct within a century without measures. 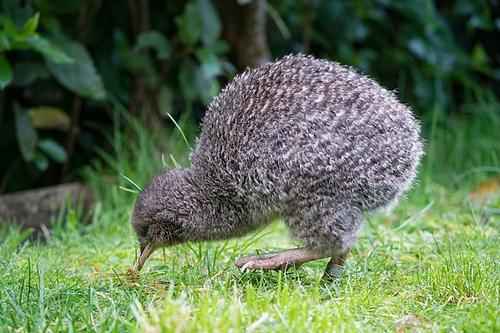 The makomako is common on the South Island; on the North Island it leves only in the forests of Taranaki. The kakapo or owl parrot is almost extinct. It is a ground bird that can hardly fly. Especially imported cats, foxes and opossums have easy prey on this bird. The kakapo feeds on buds, roots and berries. The morepork is an indigenous owl species that nest in dead trees and feeds on birds, insects and small rodents.
The black saddleback with its reddish brown back is only found on special bird islands. On the mainland he would quickly fall prey to the predators and will not be released there. A member of the saddleback, the rare kokako lives only in the forests of North Taranaki and in the Puketi Kauri Forest. The kea is the only mountain parrot in the world and this green bird lives in the New Zealand Alps. It mainly feeds on plants. The New Zealand falcon lives in Fiordland and the Southern Alps and eats small birds and rodents. 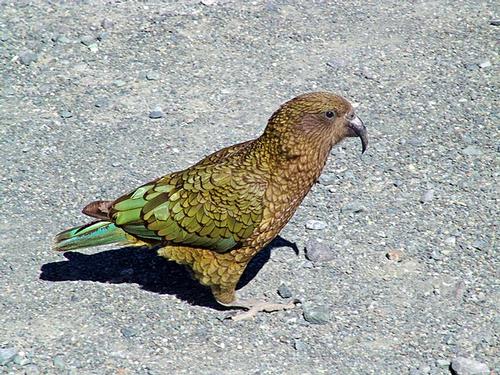 The black-green colored pukeko lives in wetlands and is a good swimmer. The rare takahe is a rally species that lives in the Fiordland National Park. There are only about 150 specimens that feed on fern roots. What is the nightingale with us is the "bellbird" in New Zealand with its very high loud voice. In the Chatham Islands the very rare black robin still occurs. Through a special program, the number increased from seven in 1979 to about 150 copies. The kereru or New Zealand pigeon is common everywhere, in contrast to the blue duck that only occurs in high altitude areas.
Examples of species imported by the British are the hawk, falcon, lark, swallow, blackbird, starling, Australian black swan, white heron and California quail. The khaki or black stilt, the rarest wader in the world, probably only exist marginally. The king's albatross with a wingspan of three meters is still found on the Otago peninsula, near Taiaroa Head, while the black petrel only occurs worldwide at the Punakaiki Pancakerocks on the west coast of the South Island. Two other very rare birds are the Fiordland crested penguin and the yellow-eyed penguin, which are very similar in appearance. The blue penguin is still very common, but can only be seen at night when it comes ashore. 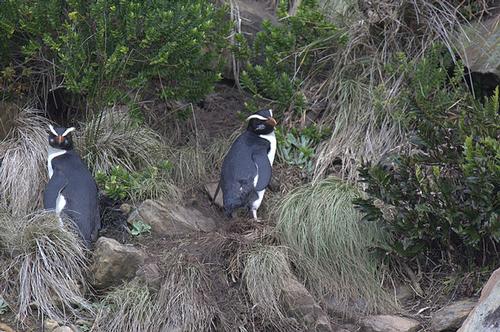 The "scaup duck" is a small water bird that can dive up to 10 meters deep and only occurs in New Zealand. After the arrival of the first humans, it didn't take long for the moa or giant ostrich to become extinct. It happened as early as the early 14th century. Another spectacular extinct bird is the New Zealand eagle, believed to be the largest eagle to have ever lived.

Reptiles and insects and invertebrates

Reptiles are very sparingly represented with some lizards such as skinks, geckos and the famous bridge lizard or tuatara. The tuatara has a pedigree that goes back 220 million years to the Triassic, and is therefore considered the oldest animal in the world. Amphibians are limited to some archaic frogs of the genus Leiopelma. Snakes are not found in New Zealand. 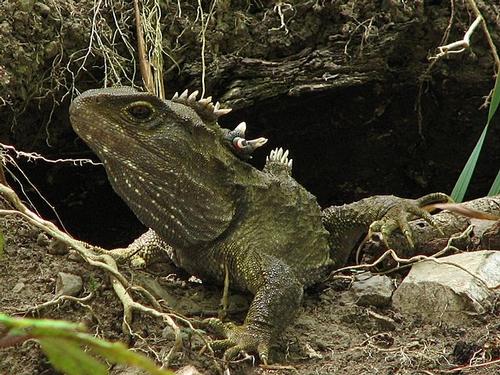 The large weta is a winged grasshopper that only occurs on Barrier Island and the Poor Knight Islands. The black sand mosquito is the most famous insect in New Zealand and also the most difficult; in search of blood they hunt for everything that is in motion, including humans, especially! A well-known butterfly species is the thistle butterfly. Armed with a deadly poison is the katipo spider. Invertebrate fauna is also relatively poor, except for land snails; New Zealand has the largest diversity of lung snails in the world per unit area. Furthermore, the curious worm centipedes also occur.

Sperm whales, killer whales, dolphins, sea lions and fur seals are abundant in the seas around New Zealand. A total of 80 species of whales and nine species of dolphins including bottlenose dolphins, white-sided dolphins and the rarest dolphin in the world, the Hector dolphin. 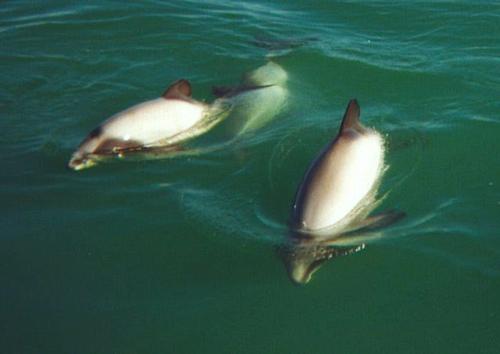 Native freshwater fish are completely absent from New Zealand. Trout and salmon in the lakes and rivers are descendants of specimens introduced in the nineteenth century. Millions of brown trout live in the lakes due to abundant food and the lack of natural enemies. Moreover, they are now on average five times larger than their British ancestors. The same story applies to the rainbow trout. Catfish, perch and carp are other introduced species.

In November 2009, Scottish scientists succeeded in capturing a rare species of fish near New Zealand at a depth of over seven kilometers. The fish were photographed in the Kermadectrog, a rift in the seabed off the coast of New Zealand at a depth of 7560 meters. No other fish in the Southern Hemisphere lives so deeply underwater. The animals are pink in color and have a striking spherical body with a long tail. The species is known under the name Notoliparis kermadecensis.