The Gambia's written history does not begin until the 15th century, when the Portuguese founded a trading post on an island in the Gambia River. Little is known about before that time. About 500 years BC. the Carthaginian Admiral Hanno makes mention of the Gambia River for the first time. In 445 BC. sailed the famous Greek historian Herodotus up the Gambia river. 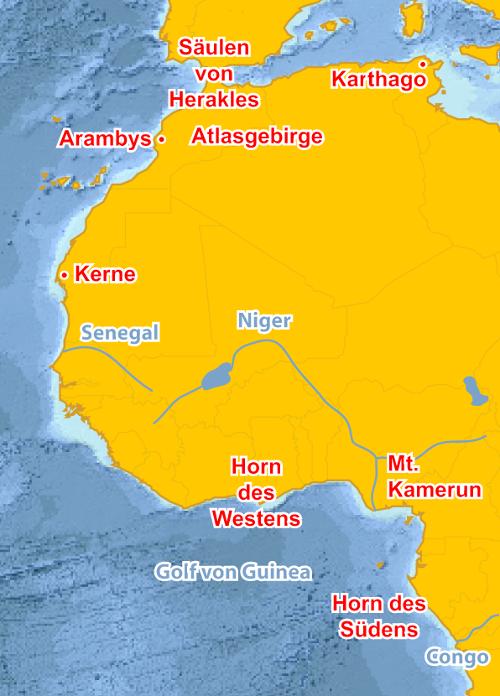 Travel destinations of the Carthaginian explorer HannoPhoto: Xerxes2k CC 2.5 Generic no changes made

An unknown people left around 700 AD. stones behind which are placed in the form of circles. These stone circles can be found near Wassu, on the south side of the Gambia River. Strangely, all other circles found are north of the river.

At that time the Arabs crossed the Sahara and gradually conquered North Africa. Berbers were driven to the south and in turn the Wolof and the Mandinka were forced to move south, including to the area of the present-day Gambia. People and tribes began to form that were conquered by the kingdom of Ghana around 1100, then situated on the site of what is now Mali and Mauritania. After this, Berber tribes invaded The Gambia, and with them came Islam. 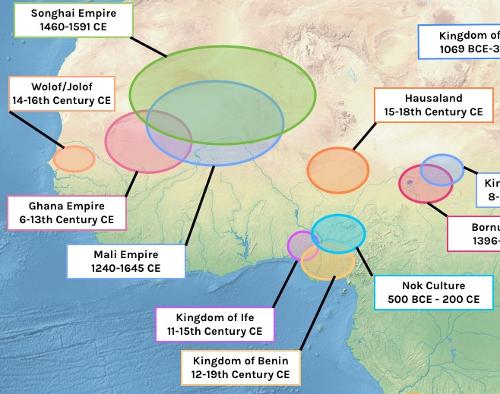 African kingdoms in ancient times and the Middle AgesPhoto: Kulttuurinavigaattori CC 4.0 International no changes made

At the beginning of the 14th century, the emperor of Mali invaded and the Gambia was conquered again. The emperor was also a descendant of Berbers. During the 16th century, trade relations developed between Berbers living in The Gambia and tribes from the border area of Mali and Nigeria.
New tribes emerged, called Songhai. Meanwhile, the whites arrived in Africa and the Berbers withdrew to Mali from the area of the Gambia River. After this, quarrels arose among the Songhai people and the Songhai were therefore easy prey for the Spanish and Portuguese. They were Spanish and Portuguese Muslims, driven from Europe by Christian troops, who appeared off the coast of The Gambia. 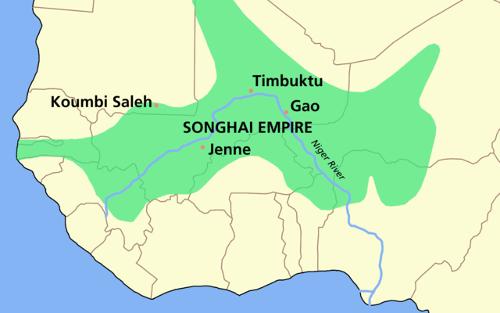 In 1456 the Portuguese sailed up the Gambia River on the initiative of Henry the Navigator. On an island in the river, a trading post, Ilha de San André, was established and the Portuguese ruled the entire area along the river. From 1501 the first slaves were sold mainly to Spain. The British took it big and the first large slave transport dates back to 1562 to Great Britain.
Immediately afterwards the slave shipments to America and the Caribbean began. It is estimated that between 1501 and 1856, the year in which America abolished slavery, over 12,000,000 slaves were transported from The Gambia to America. This was done under degrading circumstances and probably more than half of the slaves died during the journey. At the end of the seventeenth century, the Senegambian area had more than ten fortresses and posts for the slave trade.
The Gambia and the slave trade were discussed extensively in writer Alex Haley's bestseller, "Roots". The television series that was made as a result of the book also made a big impression. 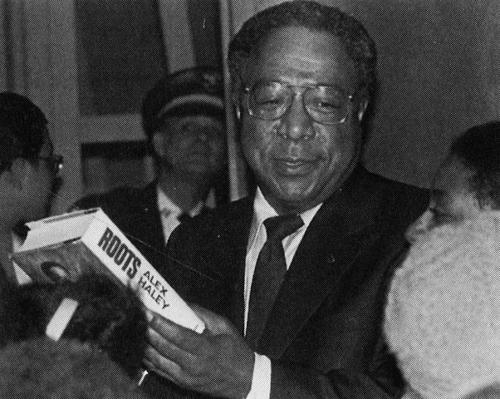 Writer Alex Haley and his book 'Roots' GambiaPhoto: University of Texas at Arlington Photograph Collection CC 4.0 International no changes made

In 1651 the German Duke Courland had the first fort built on the Ilha de San André. In 1661, Ilha de San André was occupied by the British and they built a new fort called Fort James, after the English King James II. However, the British frequently came into conflict with hostile tribes and French soldiers. In 1681, the French founded an enclave called Albadarr or Albreda on the north bank of the Gambia River.
After a great fire in 1686, the French left Albadarr. In 1689 it was recaptured by the British and in 1695 the French reclaimed the area and destroyed Fort James. Even at the beginning of the eighteenth century, Fort James was constantly changing. And in the end, during its 300-year occupation, the island changed hands at least 10 times. 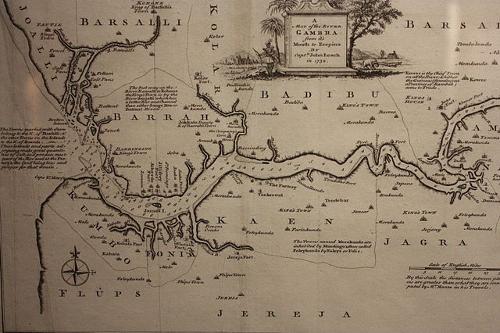 The 1763 treaty of Paris seemed to offer a solution. The Gambia would become British, while the French were allowed to stay in Albadarr. Now, however, the British were again expelled by natives and the French seized their chance again. In 1779, the island was occupied by the French, but the Gambia was finally granted to the British by the Treaty of Versailles in 1783, and neighboring Senegal was for the French. However, the boundaries of the area were far from fixed. These were not established until 1884 at the Berlin Conference. From 1920 the Gambia became a British protectorate. In the twentieth century, the British empire slowly collapsed and major changes were imminent for The Gambia. In the early 1960s, David Jawara founded the People's Progressive Party. This party won the elections in 1962 and became the largest party in the newly established Gambian parliament. The Gambia became independent on February 18, 1965, albeit under the banner of the Commonwealth of Nations as an independent member. Jawara became The Gambia's first Prime Minister. In 1967, the Gambia and Senegal signed a cooperation treaty that was to lead to the two countries continuing as one country, Senegambia. In 1976 the borders between the two countries were redefined and between 1982 and 1989 they formed a confederation of states. That treaty was canceled in 1989 because Senegal felt that the Gambia was not developing fast enough. The Gambia then decided to remain independent.

It was not until 1970 that the Gambia became fully independent with Jawara as its first president. The Gambia was the last British colony in Africa to gain independence. In 1980 and 1981, conspiracies against Jawara were discovered, and armed forces (200 men) and police (700 men) were expanded. 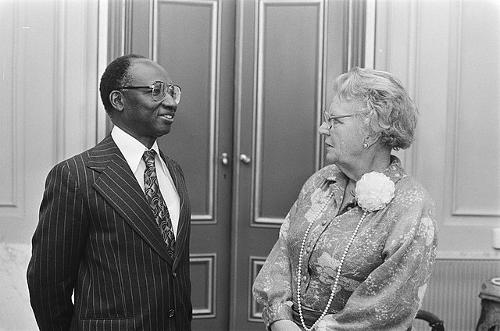 President Jawara of Gambia with Queen Juliana of the NetherlandsPhoto: Rob Croes / Anefo in the public domain

Some time later, the armed forces were expanded again and that eventually led in 1994 to a coup d'état by Lieutenant YahYa Jammeh, which incidentally came about without bloodshed. Jawara was accused of corruption. The ordinary population also benefited too little from the increasing income from the tourist industry. Jawara fled to Senegal. Jammeh formed a military government but promised to restore democracy and called elections for July 1996. Meanwhile, the economy was severely damaged by all the events. England and the Scandinavian countries in particular advised tourists not to travel to The Gambia. It was not until the end of 1995 that tourism got back on track.
In 1996 and 1997 parliamentary democracy was "restored" with a new constitution, Jammeh was elected as new president and general elections took place. Jammeh's new party won with 56% of the vote, amid protests from its opponents. Foreign countries also disagreed with the conduct of the elections. Still, Jammeh remained popular among the common people. Jammeh in turn announced far-reaching plans with regard to infrastructure and the economy. A new airport was also built and it was promised that hospitals and schools would be built in the interior.

In late 1997, The New African magazine published an article about millions of dollars in development aid allegedly ending up in foreign bank accounts. Human rights would also be messed around. Despite this negative publicity, it appears that Jammeh is currently the only one who can provide the Gambia with much-needed stability. Partly under pressure from foreign donors, presidential elections were held in 1996 and parliamentary elections in 1997. Jammeh won with 56% of the vote and was installed as President on October 18, 1996.
In the presidential elections of October 18, 2001, Jammeh was re-elected with 53% of the votes cast. His main opponent, Ousainou Darboe, got 32% of the voters behind him. Although several violent and intimidating incidents towards the opposition occurred in the run-up to these elections, the elections have been conducted in an orderly manner and have been labeled free and fair by observers. On June 1, 2002, ex-President Sir Dawda Jawara, deposed in 1994, returned to The Gambia after an eight-year exile in the United Kingdom. The return was possible after an amnesty granted by Jammeh. 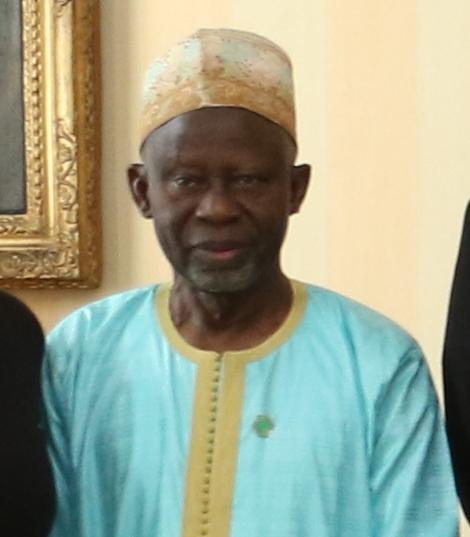 Due to the many changes of ministers and state secretaries, as well as, for example, the chief of defense staff, chief of police, chief of security and central bank director, he has few supporters left. In October 2005, former Home Secretary Samba Bah was arrested for economic crimes, espionage and terrorism. The chairman of the election committee, appointed to organize the presidential, parliamentary and municipal elections, also suffered and was removed from office in early July 2005. Trust that ministers and government officials have in the president and the functioning of the government is therefore small and decisions are only made at the level of the president. To date, the opposition has not yet managed to present a joint opposing candidate. If the opposition succeeds in this, there is a high risk of political instability in the run-up to the presidential elections (as happened before in the run-up to the 2001 elections).

During by-elections in September 2005, three of the four parliamentary seats to be won were won by the opposition coalition National Alliance for Democracy and Development (NADD). In September 2006, President Yahya Jammeh (41 years old) was re-elected as president. He received the most votes in 47 of the 48 constituencies. In January 2007 his party also won the parliamentary elections. In May 2008 Jammeh draws attention with the statement that he wants to behead every homosexual in The Gambia, he is strongly criticized by the international gay movement.
In September 2009 Jammeh threatens to kill human rights activists. In November 2011, President Jammeh wins the presidential election and will run for another term. In October 2013, The Gambia left the Commonwealth, according to Jammeh, due to the neocolonial structure of the organization. In December 2014, military personnel commit a failed coup during a trip abroad by President Jammeh. Many arrests of both military and civilians followed in January 2015. President Jammeh proclaims that The Gambia is an Islamic republic. He says he wants to deal with the colonial past with this.
In the summer of 2016, there have been attacks by the government on the opposition ahead of the 2016 presidential election. Opposition leader Ebrima Solo Kurumah dies in detention, Amnesty International is investigating the case. In December 2016, Jammeh loses the presidential election to opposition candidate Adama Barrow. 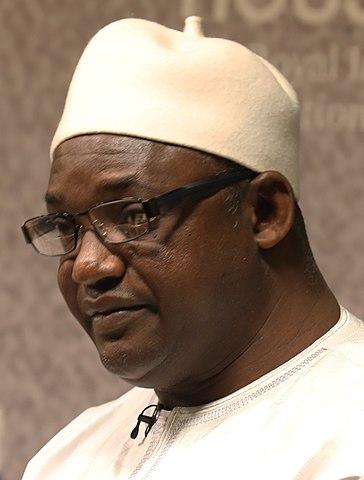 In January 2017, he finally leaves the country after threats from neighboring states with intervention. In the April 2017 parliamentary elections, the United Democratic Party wins the absolute majority, ending the power of ex-President Jammeh's party. Barrow was re-elected president in december 2021.