General elections were held for the first time in 1964. Just like in England, the elections are held according to a district system. The Gambia is administratively divided into six “divisions” (provinces). These are divided into 45 districts. For the current political situation see chapter history.

Administrative division in The GambiaPhoto: TUBS CC 3.0 Unported no changes made

Just over a quarter of the population has finished school. A much larger percentage can read and write. There is no compulsory education, and it does not matter when children go to school for the first time. Usually at the age of five or six. Further education is followed by only 25% of the children in rural areas. Six-year primary education is free. It is mandatory to wear a school uniform, the cost of which must be paid by the parents. There are private schools as well as schools funded by the government. The Quran is taught in mostly Islamic schools, which is why Arabic lessons are compulsory. 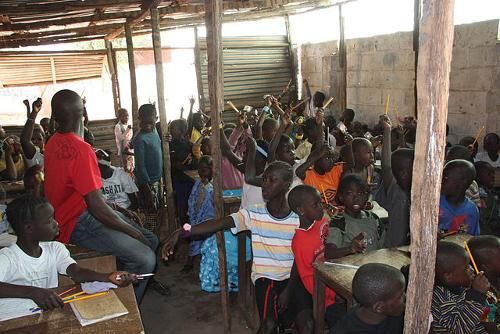 The higher courses take an average of five years. Higher in the case of Gambia means administrative training and technical secondary education. HBO courses and university education are possible since 1999. The University of The Gambia was established by an Act of the National Assembly of the Gambia in March 1999. The enactment, which was a bold step to fulfill a long-standing desire of the people of The Gambia and to respond to several years of advocacy both within and outside the country for a university, ended years of indecision on the university question.

Logo University of The GambiaPhoto: Gatherinformation CC 4.0 International no changes made