France (La France; officially: République Française) is a republic in Western Europe. The total area of France is 543,965 km2, making it the second largest country in Western Europe and the 37th in the world by area. France is thirteen times the size of the Netherlands and about the same size as Spain and Portugal combined. In all of Europe, France is the largest country after Russia and Ukraine. The greatest distance from north to south is 975 kilometers, about the same as from east to west.

Most of France's borders are natural. To the west is the Atlantic Ocean, to the northwest the Pas de Calais and the English Channel, to the east the Rhine, the Jura Mountains and the Alps, to the south the Mediterranean Sea and the Pyrenees. 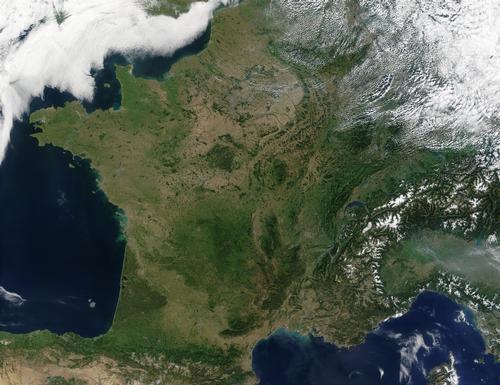 The French state comprises, in addition to metropolitan France "la Métropole", the overseas departments: Guadeloupe, French Guyana, Martinique and Reunion, the "collectivités territoriales" Îles Saint-Pierre et Miquelon and Mayotte, and four overseas territories: New Caledonia, Vanuatu, French Polynesia and Wallis and Futuna. Furthermore, France also claims a part of Antarctica: Adélieland. New Caledonia also has a new status since January 1, 2000. The overseas departments (DOM) have approximately 1.7 million inhabitants and the overseas territories (TOM) and New Caledonia had slightly more than 430,000 inhabitants in 1996. Today all these areas are represented in the French National Assembly.

The French landscape consists of plains, coasts and old and young mountains. The mountains are located in the south and east of France and cover about 25% of the total area of France.

The lowlands and hills, below 500 meters, cover most of the country. Ancient mountain ranges include the Armorican Massif in Brittany, which is up to 400 meters high, the hilly foothills of the Belgian Ardennes, the Vosges in the northeast, which reach up to 1400 meters, and the Massif Central, which is up to 1800 meters high. The shapes of these fold mountains, which originated in the Carboniferous, have been severely worn down because they have been exposed to wind and weather for about 300 million years.

Rivers have cut deeply in the Massif Central, including the gorge of the Ardèche river. The area west of Clermont Ferrand is a volcanic landscape of which the Monts Dômes forms a chain running from north to south. The old volcanoes generally only rise a few hundred meters above the fertile land. The Puy de Dôme, the highest mountain in the range, and other conical mountains are examples of dead volcanoes. Many major rivers originate in this area: Loire, Dordogne, Tarn, Ardèche and Hérault. 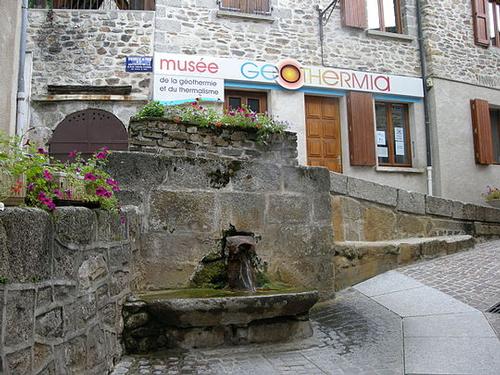 In the Auvergne there are many hot springs, of which the spring water of Chaudes Aigues is the warmest in Europe with a temperature of 82 °C.

Young mountains are in the south the Pyrenees and in the east the Alps and the Jura. These so-called folding mountains are partly very high, with Mont Blanc (4807 meters) on the border with Italy as the highest mountain in Europe. These "young" mountains were mostly formed in the tertiary period from 65 million to 2,5 million years ago. The weathering has not yet struck like this, and as a result these mountains still have sharply drawn shapes. The Alps are easily accessible due to the presence of long and large river valleys. This is an important difference from the Pyrenees, which are more of a closed block and barrier. 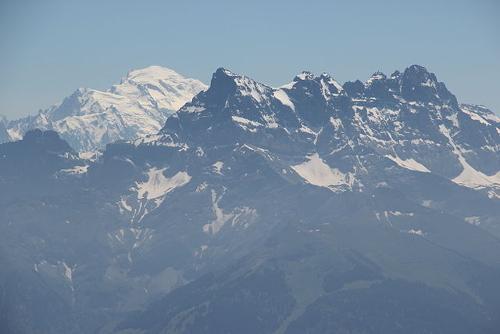 The Pyrenees consist of two mountain ranges that overlap at the point where the Garonne rises in the Valle d'Aran, a corner of Spain north of the watershed in the Pyrenees. There is a clear difference between the forests and meadows of the moist and fresh Atlantic Pyrenees and the vineyards and orchards of the sun-drenched flank on the side of the Mediterranean, one of the driest areas in France. The highest waterfall in Europe (422 meters), the Grande Cascade de Gavarnie, can be found in the Cirque de Gavarnie, a rocky amphitheater carved by rivers and glaciers and rimmed with peaks of up to 3000 meters.

The Northern Alps (Alpes du Nord) comprise the Isère basin with its tributaries. The climate here is colder and more humid with a lot of snow. There are numerous glaciers that provide a lot of melt water in summer. Due to the great decline, the rivers are very suitable for the construction of dams and the generation of electricity.

The Southern Alps (Alpes du Sud) comprise the basin of the Durance and the Verdon. The relief here is less impressive. The climate is warmer, drier and sunnier. 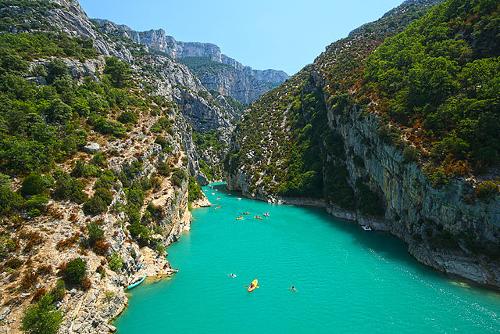 In the north lies a large saucer-shaped plain with Paris roughly in the middle, the so-called Basin of Paris. This low plain is vast and has an undulating landscape with wooded ridges in the east. These are steep edges or cuestas, hard remnants of a worn-out rock layer. The limestone layers of the Paris Basin reach the coast at the Channel and form a steep chalk or falais coast there. The Paris Basin is bounded by the Armorican Massif, the Massif Central, the Vosges and the Ardennes.

In the southwest there is also an extensive lowland, which includes Bordeaux, the Aquitaine Basin. South of Bordeaux is a dune coast with extensive beaches and beach lakes. The area behind the dunes, Les Landes, was always swampy due to poor drainage, but many forests have been planted here since the 19th century. 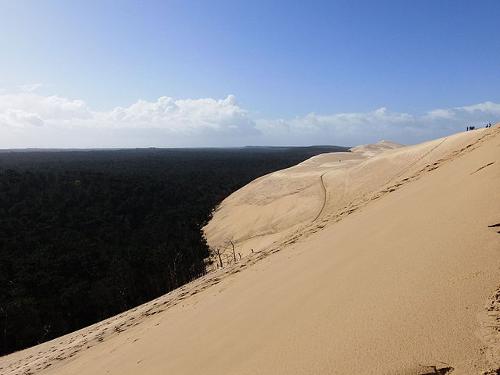 The Massif Central does not consist of one mountain range, but is an enormous plateau between the Loire and the Mediterranean Sea and covers one sixth of France (91,000 km2). The highest peaks are in the Auvergne in the north. The Causses and Cevennes further south are less high but rougher, with churning rivers and rock gorges.

The Rhône Valley runs between the Massif Central and the Alps, which fans out to the south in a delta made up of river clay. Here too there are lakes behind the beach wall and the drainage is poor. In this area lies the Camargue, a wild and protected area. To the west of the Rhône delta there is a fairly wide coastal plain with an extensive beach and to the east of this delta the coastal plain is very narrow and the rocky coast sometimes rises steeply from the sea, while the beaches are mainly found in bays.

In Normandy, the famous Mont-Saint-Michel, an 80-meter-high rocky island, lies in front of the mouth of the river Couesnon. There are many islands off the coast of Brittany. Sein is no higher than a big wave and produces scallops, lobster and spiny lobster. Oessant is an important point on the sea chart and notorious for its shipwrecks. Belle-Ile, Hoëdic and Houat, with excellent beaches, lie off the sheltered south coast. Groix is a smaller version of Belle-Ile, with a rocky coast and beach. At Concarneau lie the nine uninhabited Glénan Islands, now a nature reserve. Bréhat has a mild climate and exotic vegetation. 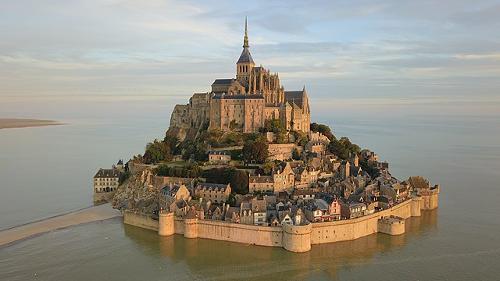 The coast of France is very long, 6200 kilometers, and varied. Where an old or young mountain occurs, there is a rocky coast with often deep coves. It concerns the coast of Brittany, Normandy, Provence and the island of Corsica. North of Cap Gris-Nez and south of the Gironde estuary we find a dune coast. To the north of the Seine estuary the coast consists of steep limestone cliffs or falaises. In the southwest, the dunes are very high and wide. The highest sand dune in Europe is the "Dune du Pilat", on the coast of Aquitaine. It is nearly 3 kilometers long, 115 meters high and 500 meters wide. As the dunes grew, small rivers were sometimes dammed and lakes were created. Such a lake in the vicinity of the coast, which is closed off from the sea, is called an "étang". These lakes are also found on the Mediterranean coast.

The Mediterranean Sea has a real silting coast due to the large supply of sand and clay via the rivers and the low ebb and flow currents. This allows the sludge to settle fairly quietly.

The longest river in France is the Loire with a total length of 1006 kilometers. It flows from its source in the Ardeche to its funnel mouth at St. Nazaire on the Atlantic coast. 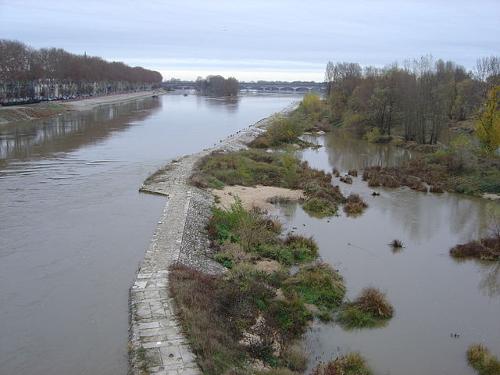 The Rhône, which has its source in Switzerland, is fed by melt water from the rivers Isère, Drôme and Durance. The Garonne flows from the Pyrenees via Toulouse and Bordeaux to the Atlantic Ocean. From the Massif Central, the Tarn and the Lot join.

The Dordogne has its source in the Massif Central and has a total length of 490 kilometers. Just north of Bordeaux, it merges with the Garonne, and together they form the Gironde, which flows into the Atlantic Ocean.

Other important rivers are the Rhine, the Garonne and the Seine which flows right through Paris (775 km).