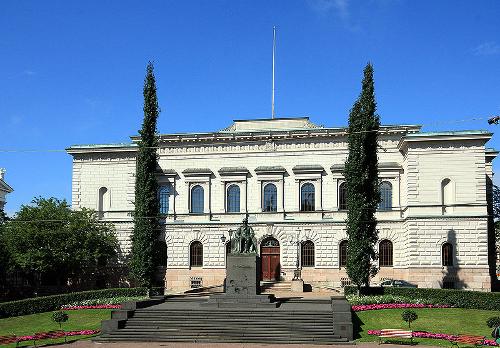 Bank of FinlandPhoto: Mahlum in the public domain

Finland has a free market economy, with very many private companies: more than 80% of industrial production and about 90% of banking services are provided by private individuals. With a GDP of $ 44,500 per capita (2017), Finland is one of the wealthier countries in the world. Finland has remained a predominantly agricultural country for much longer than the other Scandinavian countries. In the years after the war, the emphasis shifted rapidly: in 1950, 36% of the labor force still worked in the agricultural sector, 28% in industry and 25% in the service sector. In 2017, these numbers were 4%, 20.7% and 75.3% respectively. An important role in this shift was played by the peace treaty with the then Soviet Union and the associated heavy reparations. After the Second World War, the economic relationship with the Soviet Union went hand in hand with cooperation with the West. The latter has led to a higher level of technology, greater specialization and a shift from wood improvement to the metal industry. Most economic (especially industrial) activity takes place in Southern Finland. In Finland, the unemployment rate was 8.5% in 2017.

The share of agriculture in the net national product is only small. The farms are small and the climate is not very suitable for agriculture. The best agricultural areas are in the southwest. Oats are the main grain, followed by barley, wheat and rye; other products are potatoes and sugar beets. Agricultural cooperatives occupy an important place within the agricultural sector. The government pursues an active policy of expanding grain production in a northerly direction (new varieties) on the one hand and increasing the agricultural area through exploitation on the other. Livestock farming is more important than agriculture. To the north, the length of the growing season decreases as a result of which livestock production increases. Intensive livestock farming (cows and pigs) is common south of Tampere and in the lower coastal plains. Lapland has extensive animal husbandry in the form of reindeer. These animals provide meat, milk and hides. The Chernobyl nuclear reactor disaster contaminated many reindeer and had to be killed. The meat was of course unfit for consumption. Horticulture is limited to some greenhouse crops.

Forestry is still the basis of the Finnish economy. Two thirds of the country is covered with forest. Farmers supply timber to shipyards and other timber processing industries. More than a third of exports consist of high-quality papers, furniture and prefabricated houses. Finland produces about 44 million cubic meters of wood, making it the second largest wood producer in Western Europe, after Sweden.
Fishing cannot meet domestic needs. Freshwater fishing (salmon, trout, pike, perch) is therefore mainly an ancillary activity.

The Finnish soil is free of coal and petroleum;peat is present in large quantities and is used for small power plants. The most important mines are at Outokumpu in the south-east (mainly copper) and at Otanmäki at Lake Oulum in central Finland (iron). Some nickel, zinc, silver and gold are also mined, but of little significance.

The most important branches of industry are the metal and electrical industry, followed by wood processing with end products including paper and cellulose. Large sawmills can be found at Kotka, Oulu, Kemi and Hamina, among others. The furniture industry is mainly located in Helsinki, Turku and Lahti, wood pulp, cellulose and paper industry especially at Kotka, Kuusankoski and Varkaus. The metal industry is very extensive (including Helsinki, Turku and Tampere). The textile industry mainly produces cotton and rayon and is located in Tampere, Turku, and Vaasa, among others. The Finnish glass and pottery industry is famous for great technical skill and artistic quality. The food industry is also of some significance.

Finland is highly dependent on Russia for its energy supply, both for oil and natural gas. The five nuclear power plants provide approximately 20% of the total electricity production. 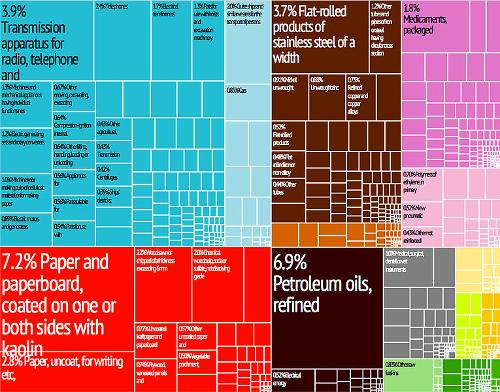 The changed economic relations with the former Soviet Union have had a major influence on Finland as a trading country. Finnish industry was mainly focused on producing goods for the Soviet market. That trade was conducted according to the "clearing system". There was, in fact, barter;raw materials were exchanged for paper, machines and ships. This gave Finland a lot of advantage because the Soviet Union had to pay more and more for Finnish products. In 1988 this system was abolished and from now on payment had to be made in hard currency. Due to the great lack of hard currency, the Soviet Union was no longer able to pay for Finnish imports. An important consequence of this was, of course, a sharp fall in exports.
The trade balance has been in surplus for years. Main exports are paper, cellulose, pulp products, wood and wood products, glass, ceramics, textiles, machinery and ships. Imports include machines, electrical equipment, cars, chemical products, oil, iron and steel. The main trading partners are Germany, Sweden, England Japan. Finnish business is increasingly focusing on the Western European market. 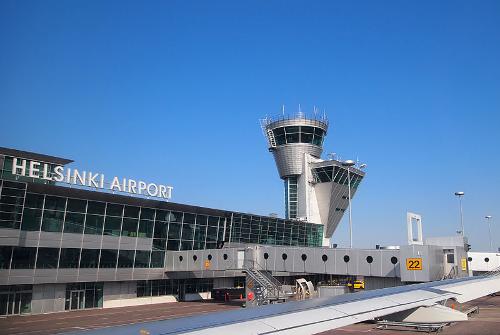 For many years the rivers and lakes were the main transport arteries in Finland. The construction of a road network was not started until 1500. In present-day Finland, shipping is still the main mode of transport. About eighty percent of goods transport takes place by seagoing vessels.
Passenger traffic is mainly by sea or air. In the north there is a railway connection with Sweden and in the southeast with Russia. The total length of the railway network is approximately 6000 km. Inland navigation is not unimportant for freight transport (especially wood). The total length of the waterways is approx. 9200 km. Finnish airline Finnair operates scheduled services to approx. 25 domestic destinations and approx. 34 cities in Europe, the Middle East, Southeast Asia. and North America. Ferry services provide connections to Sweden, Denmark, Germany, Poland, England and France. The important sea ports include Helsinki, Turku and Oulu. Ice breakers keep some ports on the Gulf of Bothnia open in winter.