Madagascar is one of the poorest countries in the world, where more than half of the population lives from agriculture. The export also consists largely of agricultural products. The economy is growing very slowly due to, among other things, corruption, low world trade prices, poor infrastructure, isolated location, low purchasing power of the population and natural disasters. The gross national product per capita is currently (2017) only $1,600 dollars per year. About 70% of the population lives below the poverty line. Famine even occurs in the dry south.

With regard to other countries, Madagascar has been pursuing an open-door policy for several years, that is to say that any country may enter Madagascar to invest.

Food crops are generally grown on small-scale farms on the high plateau. Rice is by far the most important product; rice has been imported since 1972. The aim is self-sufficiency, but that will not be easy due to the lack of modern machines and outdated irrigation systems. 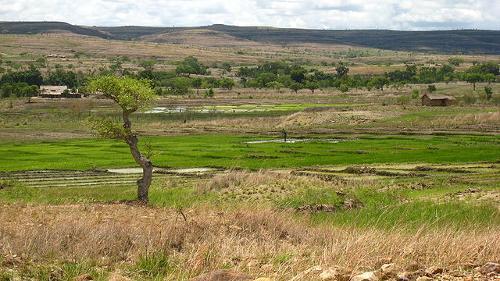 New planting methods give some hope again. Cassava, sweet potatoes, avocados, bananas, lemons, groundnuts and vegetables are grown for their own use. Export products such as vanilla, coffee and tea are less affected by nature. They are grown in the fertile regions. Coffee is the main export product. Madagascar is the largest producer of vanilla in the world. The vanilla is grown in areas between the high plateau and the northeast coast. Furthermore, Madagascar accounts for about a third of the world's clove production. Sisal, pepper, sugar cane, tobacco and cotton are also grown and tea plantations have begun. 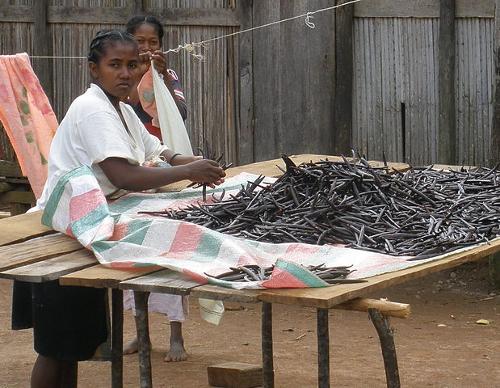 Despite the large number of livestock, especially important as a status symbol, livestock farming has almost no economic value. The livestock keepers are semi-nomads. Pasture land is used inefficiently. Mainly zebu are kept, as well as cattle, pigs, sheep, goats and chickens. Zebus are mainly held by the Antandroy tribe and the Mahafaly tribe of the south and the Bahalava tribe of the west. The zebu are almost sacred animals, slaughtered and eaten only during social and religious festivals. There are almost as many zebu as there are people in Madagascar.
The French tried in vain to turn the Madagascan farmers into modern livestock keepers with cattle from Europe, but they failed. The Madagascans preferred to hold on to the zebu. 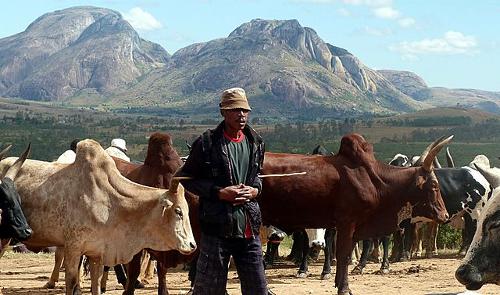 Zebu shepherd on MadagascarPhoto: Wayne77 CC 4.0 International no changes made

Fish exports are becoming increasingly important. The tuna and shrimp production, which has tripled in a short time, is to blame for this. Eighty percent of fish exports go to European countries. The Vezo tribe in particular are real fishermen, often still in a traditional way.

There is a treaty with the European Union on fishing by EU countries in Madagascan waters in exchange for payment.

The presence of many minerals has been demonstrated, but little is exploited, partly due to poor accessibility and poor infrastructure. Main minerals are graphite, chrome ore, mica, iron ore and various semi-precious stones such as tourmaline, beryl, zircon, topaz, amethyst and celestine. In recent years, many sapphires have been found and exploited. The largest crystal in the world has been found in Madagascar, 18 meters long, 3.5 meters in diameter and weighing 380 tons. The exploitation of bauxite and titanium ore began in the 1980s. 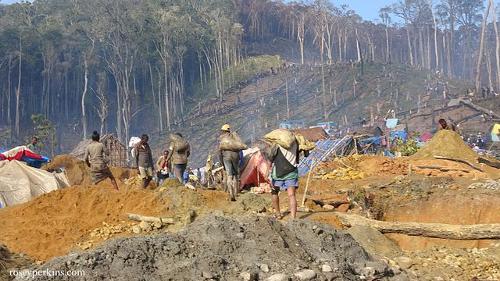 Mining activities in the jungle nearby Ambatondrazaka, MadagascarPhoto: RoseyPerkins CC 4.0 International no changes made

The trade balance still shows a significant deficit. An attempt is made to limit the negative balance with a very cautious import policy. Food (especially rice), petroleum, machinery and means of transport are imported. In 2017, $2.7 billion was imported mainly from China, France and further from South Africa, India and the Gulf countries.The main export products are coffee, cloves, vanilla and shrimp. In 2017, $2.3 billion was exported mainly to France, Hong Kong, Japan, China, the United States and the Netherlands. 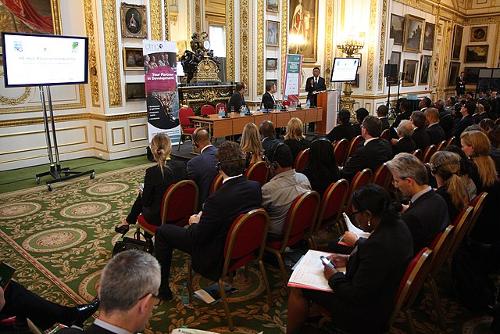 The President of Madagascar speaking at the UK-Madagascar Trade & Investment Forum in London, 19 November 2015Photo: Foreign and Commonwealth Office CC 2.0 Generic no changes made

The industry is mainly oriented towards the domestic market, only about 6% of the labor force is employed in this sector. Most companies process agricultural products such as rice, tobacco, coffee and cotton. The sugar and meat processing industries produce for export. However, the meat and poultry industry is seriously affected by Europe's protectionist policy. Madagascar even started importing chickens from Europe at one point. The exploitation of existing oil reserves has not yet got off the ground. Other important industries are the cement and fertilizer industry. About 400 French companies have settled in Madagascar in recent years.

The construction of roads and railways is difficult and expensive due to the climate and landscape. 15% of the approx. 60,000 km road is paved. But paved or not, in the rainy season the roads flood, become muddy and are barely accessible. Even important cities are sometimes not accessible by road. The best roads are on the central plateau and on the east coast. 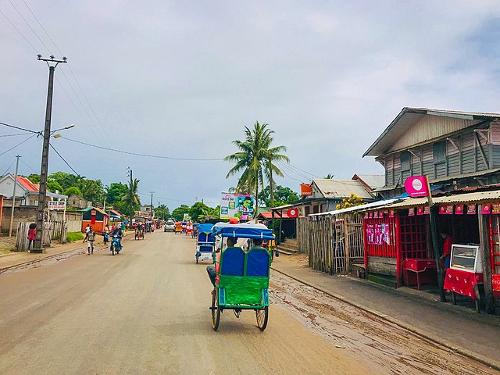 The cyclo-rickshaw is a very widespread means of transport in MadagascarPhoto: IanjaMbola CC 4.0 International, no changes made

There are hardly any good roads in the west. This regularly causes problems for the food supply. Short sea shipping and aviation are important due to inadequate land connections. Much freight traffic takes place through the 600 km long Pangalanes canal, which consists of a succession of lagoons and about one third is navigable.
Toamasina is Madagascar's main port with a direct rail line to the capital Antananarivo. The port of Antsiranana is a military port. Mahajanga, on the west coast, also has a large harbor that is too shallow for large sea-going vessels. The port of Toamasina (Tamatave) serves as the most important gateway of Madagascar to the Indian Ocean and the worldPhoto: JialiangGao www.peace-on-earth.org CC 4.0 no changes made

Many goods and people are transported over the few railway lines. There are mainly railway lines in the north and south of the central plateau. Antananarivo has an international airport. Most other somewhat larger cities have small airports for domestic flights. The network of flight routes is the densest in the world in relation to the size of the population. Air Madagascar is the national airline.