About 165 million years ago, Madagascar became detached from Gondwanaland, the primordial continent. As a result, the evolution of plants and animals took place in a completely unique way. Animal and plant species remained intact on Madagascar, while on other continents, often very negatively affected by the presence of humans, they became extinct. Nevertheless, nature in Madagascar has also suffered a lot since the arrival of the first settlers. Large areas of the rainforest were soon cleared away. Furthermore, the giant tortoise and the elephant bird are extinct, along with fifteen species of lemurs. 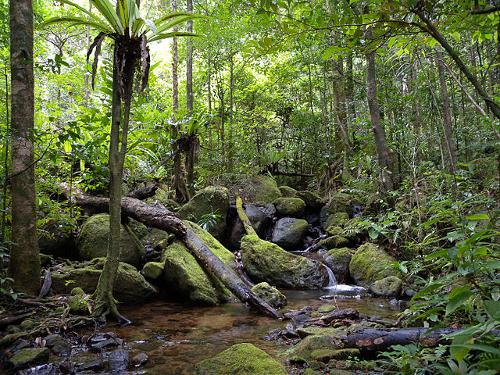 The varied landscape of this large island is another factor that has promoted the diversity of flora and fauna. For example, six complete plant families only occur in Madagascar and a further 1000 species of orchids, thousands of cactus species, countless insects, 300 frog species, 270 species of reptiles, five bird families and more than 100 species of mammals including many primates. It is remarkable that many of these species only ended up in Madagascar after the break with the African mainland

As mentioned, the variety of plant species is enormous. There are more than 10,000 species in Madagascar, 80% of which are native!

Although "tavy" (cutting down trees and then burning the ground) leaves large parts of Madagascar treeless, all types of forests still exist somewhere on the island. Imported species such as the eucalyptus pose a threat to the native species.

Madagascar's most famous tree is the baobab, the national tree of the country. They are thick, round trees with a flat crown. They can reach a height of thirty meters and the trunks can hold sixty thousand liters of water. There are seven species on Madagascar, which can live up to 2000 years old. The tree plays a role in countless African myths and legends. The bark, the fruits, the leaves, the wood, almost everything from this tree is used by the population. 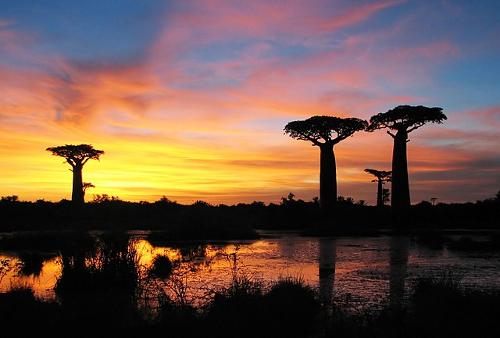 Ferns appeared on Earth 350 million ago when Madagascar was still attached to Africa. The large tree ferns in particular dominated the landscape at the time. Smaller varieties of fern are still abundant in the rainforests of the east coast, but now live in the shade of larger trees. About 170 species of palm trees are found in Madagascar, of which 165 are found nowhere else. There are some very special varieties such as the raffia palm, the feather palm and the Ravenea musicalis. This palm species is starting to grow under water! Palms are found all over the island, even near desert areas. Fifty new species have been discovered in the last ten years alone. 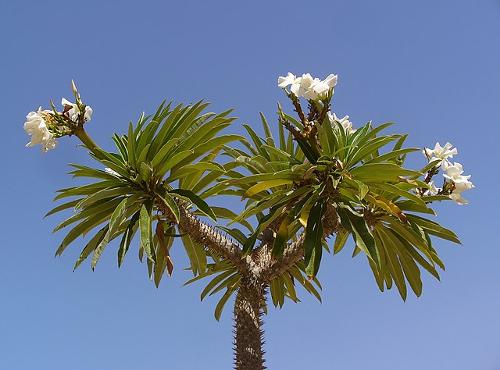 The tropical rainforest is dominated by the so-called "evergreen trees", which are trees that keep their leaves all year round. They can reach a height of 30 meters and one hectare of rainforest can contain up to 250 different species. Other "evergreen" varieties are the tapia tree, nine varieties of mangrove trees and cactus trees.

The rest of Madagascar's tree stock loses its leaves in the dry season. Examples include the banyan fig tree and the giant tamarind. Special is the "traveller's tree", named after the water that remains in the large leaves and thus provided travelers with water in earlier times. This tree is also the symbol of the national airline, Air Madagascar. 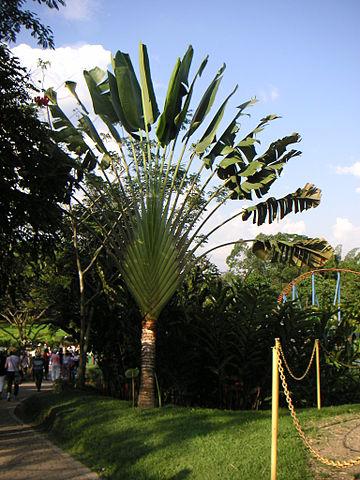 There are more than 1000 species of orchids on the island, more than in all of Africa combined. Most species live on the trees of the rainforests in the east and have the most diverse colors, patterns, sizes and shapes. Succulents predominate wherever less than 400 mm of water falls per year. They store water in their leaves, trunk or roots and therefore survive the dry climate. Aloes are well-known succulents whose leaves appear to come straight from the ground. The national flower of Madagascar is the royal poinciana. 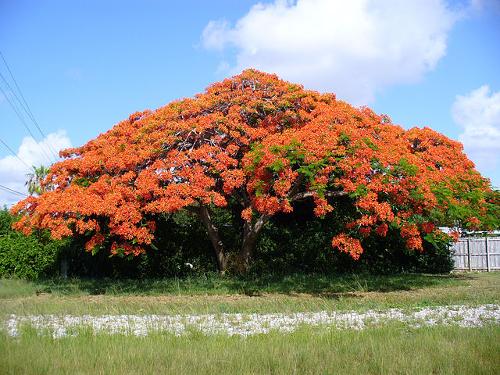 Found in the arid Southwest, Didieraeceae are very intriguing plants for botanists. It is a complete family of plants that is found nowhere else in the world and stands out because of its bizarre shapes.

There are approximately 150,000 invertebrate species living in Madagascar. A special feature is the golden orb web spider that often occurs on telephone lines with its web! The threads they make are so strong that they used to be used to make textiles. Another spider throws a web on its prey.

The 300 butterfly species all come from mainland Africa. The approximately 4000 moth species had been on Madagascar for much longer. The most impressive is the comet moth or Madagascan moon moth, which can reach a wingspan of 25 cm. We also find praying mantises, centipedes, flatworms, leeches and large numbers of beetles on Madagascar. 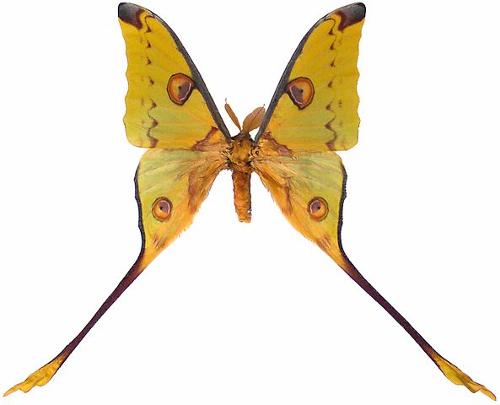 Comet moth or Madagascan moon moth is native to MadagascarPhoto: Lsadonkey CC 4.0 International no changes made

Interesting fish are the cichlids in all their colors and varieties. Their behavior is remarkable when their young are threatened. The fry then flee into the adult fish's mouth! The blind cave fish live in the underground rivers in western Madagascar. The east coast is known for the many sharks that live there. The coral reefs on the west coast are populated by countless fish species such as clownfish, angels, butterfly fish, wrasses, slime fish, gobies, moray eels, spiny fish and hedgehog fish. Freshwater fish are poorly represented.

Strangely, frogs are the only amphibians in Madagascar. Newts, common salamanders and toads do not occur. At present, hundreds of species are known, of which only two occur elsewhere in the world. However, it has been calculated that a new species is discovered every two months, and it is suspected that more than 300 species will eventually occur in Madagascar. For example, the Mantellidae frog-family has more than 200 species, all endemic to the islands of Madagascar and Mayotte.
The unique history of Madagascar is mainly visible in the reptiles. Many Madagascan species are more like species from South America and Asia than species from Africa. 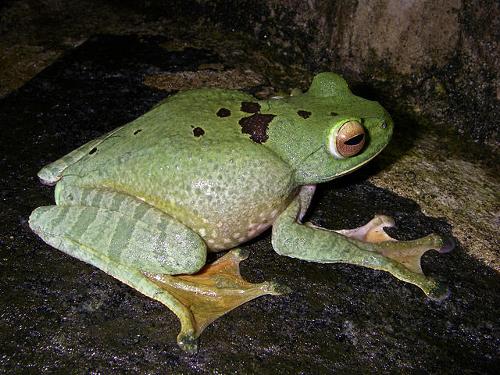 About half of all known species of chameleons occur in Madagascar. There are also 70 species of geckos. About half of the varieties have perfect camouflage colors. The other half, on the other hand, can be seen from a considerable distance. The iguanodon is a giant lizard found only in North and South America and Madagascar! The same story with the three types of boas. On the African mainland, only fossils are found, while in South America several relatives still live. The boas and all other snake species are harmless to humans.

The Nile crocodile, although endangered, is still quite common in Madagascar. Several species of turtles are in danger of extinction. Breeding programs are used to try to bring the numbers back to an acceptable level. The number of bird species is surprisingly small. About 270 species live on the island, 110 of which are only found in Madagascar. Three types of mesites are among the rarest birds in the world. The best known native birds are the 15 types of catches, all of them specialized in catching insects. Remarkable are the deviating beaks between the species. Most birds are therefore also found elsewhere in the world for eg herons, coots, grebes, ducks, teals, ibises, paradise flycatchers, hops and thrushes. Birds of prey include Madagascar kestrel, Madagascar buzzard, Madagascan cuckoo falcon and six owl species. The Madagascan osprey and Madagascan snake eagle are very rare. The extinct elephant birds, giant ratites, have certainly been the island's most striking birds; the extinction of these birds is so recent that (fragments of) eggshells are still regularly found. 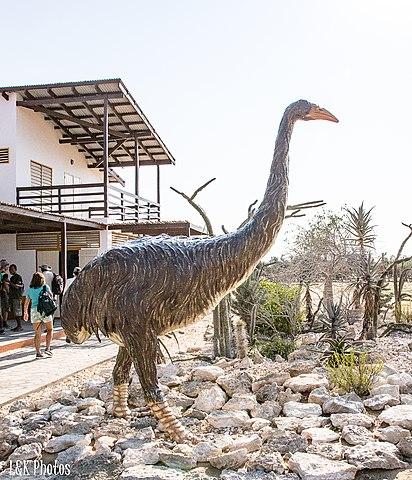 Statue of the extinct Madagascan elephant birdPhoto: LoJallen CC 4.0 International no changes made

Of all the mammals in Madagascar, the lemurs are the most famous. About fifty species are known of these monkeys. In recent years, four new species were found. The "prosimian", the distant ancestor of the lemurs, once appeared on all continents. They are also the farthest ancestors of humans. In order to survive the prosimians in Africa evolved from apes to eventually humans. However, the prosimians who ended up in Madagascar had no reason to evolve. They no longer had any natural enemies, they had remained on the mainland of Africa. Lemurs have fox-like faces and hands that resemble humans. The most famous lemurs are the brown lemur, the ring-tailed lemur, the black lemur and the indris. 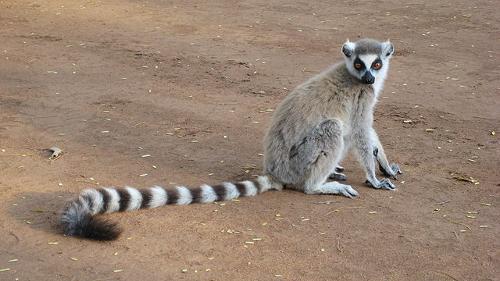 The strangest lemur species is the aye-aye. This lemur has a foxtail, bat ears and strange hands with a skeletal middle finger to scrape insects from tree bark. 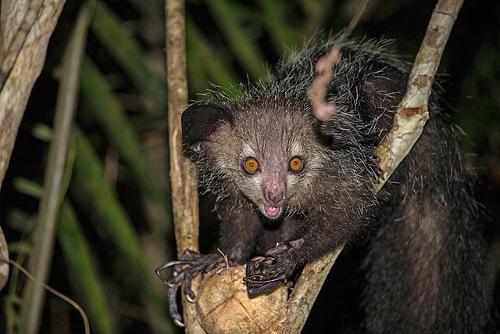 Extinct forms were probably the same size as the modern apes. In February 2001, a German and a Swiss scientist discovered a hitherto unknown species. The species discovered is a so-called wool wall that has been given the name Avahi Unicolor.

Also special are the tenrecs, of which the largest species is also the largest insectivore in the world. The number of young that this species produces can be as high as 24. 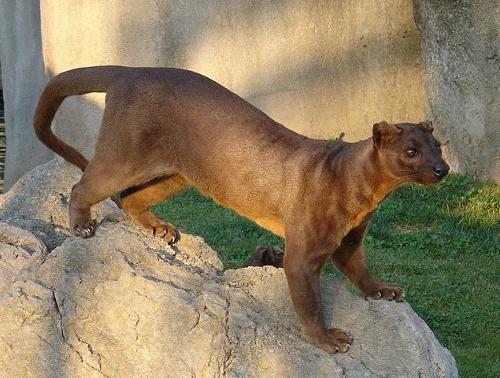 The approximately 25 species of bats also live in Africa or Asia. Three species are active during the day, the rest emerge at night.

In 2010, a hitherto unknown chameleon species was discovered in the rainforest of Madagascar. The German explorers named the species after Tarzan, a movie hero who lives in the jungle. The discovery came as a big surprise to the team of researchers from Germany and Madagascar. The flat snout of the 'Tarzan Chameleon' in particular is unique among chameleons.

In 2012 it was announced that researchers in Madagascar had discovered the smallest chameleon species in the world, with bodies measuring no more than 1.6 cm long, with a tail 2.9 cm. Unlike other chameleons, the newly discovered species cannot change color: they are always brown. The new species, which is in danger of extinction, has been christened 'Brookesia micra' and is only found on the very small island of Nosy Hara northwest of Madagascar.

In February 2016, it was announced that researchers had successfully documented one of the rarest whale species in the world. Off the coast of Madagascar they were able to film a rare omura whale, a not so large whale (about 11 meters) that often lives in shallow coastal waters. It was not until 2003 that these whales were considered a separate species. 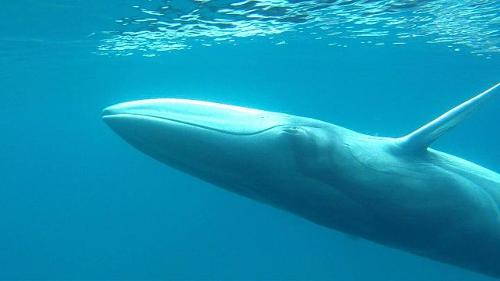