Kenya's economy is more modern than that of the other East African countries. More than 60% of the labor force was employed in agriculture in 2017; however, the contribution of this sector to the gross national product (GNP) was only 34.5%. The vast majority of Kenyans live in an area with fair to good arable land (20% of the total area). However, nearly half of the rural population lives on the subsistence level. Still, agriculture is the most important source of foreign exchange (half of the export consists of agricultural products, especially coffee and tea), followed by the rapidly growing tourism. The recurring periods of severe drought are a major problem for the agricultural sector. 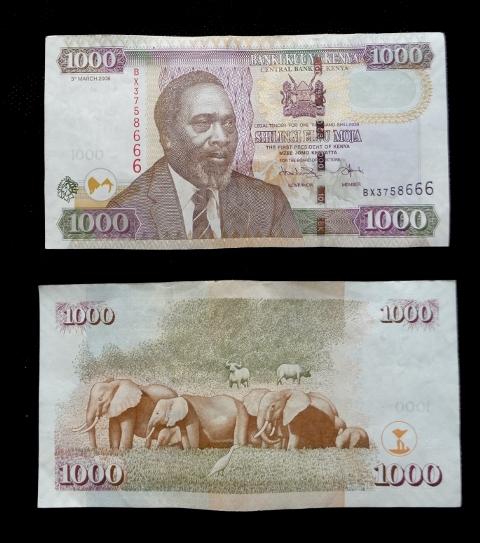 Banknote of 1000 shilling, KenyaPhoto: Rotsee2 CC 3.0 Unported no changes made

Industry (approx. 17.8% of GNP in 2017) and trade in services (approx. 47.5% of GNP) are mainly based on private entrepreneurship. The industrial, agricultural and tourist sectors are largely in the hands of foreign companies. While the government advocates greater Kenyan participation in the economy, it also encourages foreign companies to invest in Kenya. An important problem is unemployment (approx. 40% in 2017), which is mainly caused by the very rapid population growth. School-leavers mainly find work in the informal sector and in a family context, in the construction of houses for their own use and in local services. The development of non-agricultural income sources, as well as the redistribution of agricultural holdings, must provide an answer to the rapid population growth.

Another problem is disappointing economic growth; the average annual growth is only 2% against a population growth of almost 4% (a good growth of 5% in 2017). The reasons for this are the lagging agricultural production and the negative results of an industrialization policy aimed at reducing imports. The dependence on foreign capital is great. The external debt amounts to 54% of the GNP. (2017)

Finally, a handicap to economic development is the lack of minerals and energy sources, such as oil, natural gas and coal. 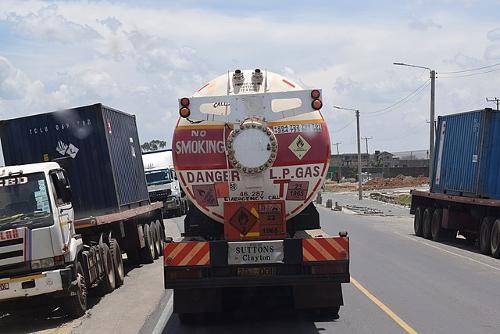 Transport of petroleum and gas, KenyaPhoto: Barracke CC 4.0 International no changes made

Foreign aid is very important to the economy. In development plans the emphasis is on combating poverty and the so-called identification of the economy. Other notable points are the fight against corruption, the total eradication of illiteracy, the improvement of medical facilities and the transportation system. A lot of investments are made in the tourism sector. Development activities are often carried out by church groups, often supported from abroad.

Kenya is, like many other African countries, an agricultural country. Most of the population therefore lives in the countryside. Only thirteen percent of the land is well suited for agriculture, because there is enough rainfall. Half of the agricultural production is sold on the consumer market and the rest is for own use. Kenya provides for its own food needs, except for grain.

The main agricultural products are sisal, pyrethrum (raw material for an insect repellent), wheat, sugar, pineapple and cotton. Maize is the staple food that thrives especially in warm, humid regions. The production of coffee and tea is mainly stimulated as an export product. In years of good production, tea accounted for 25% of the total export income. 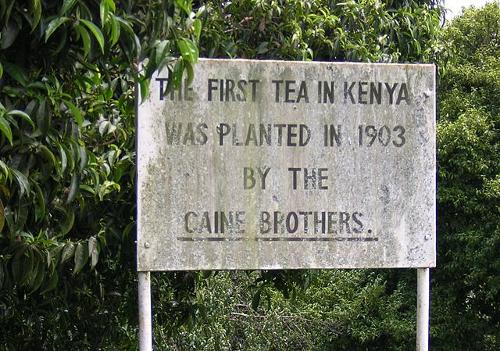 Growth sectors are also vegetables and especially floriculture, which is auctioned for about two thirds in the Netherlands. Only large agricultural companies can produce profitably, but they are an exception. After the great land reform, African farmers and cattle breeders each got their own piece of land, which was too small to be exploited profitably. Sometimes they were even too small to meet their own needs.

In addition to sheep and goats, the livestock mainly consists of cattle, which are often kept by nomads such as the Maasai. In the drier regions, livestock farming is the main economic activity combined with the cultivation of food crops such as millet and sorghum. In dry years, the vulnerable nature of livestock farming is emphasized even more. Most livestock products are consumed by the population. Meat, meat products and hides make up 6% of the total export. Due to a changed consumption pattern, more and more must also be produced for domestic demand.

Fishing in the Indian Ocean and the Great Lakes is of local significance only. In 1997 about 160,000 tons of fish were caught, of which only about 6,000 tons of sea fish. Most freshwater fish are caught in Lake Victoria. The forest cover, which is mostly located between 1800 and 3000 m above sea level, is largely protected and therefore cannot be exploited economically. 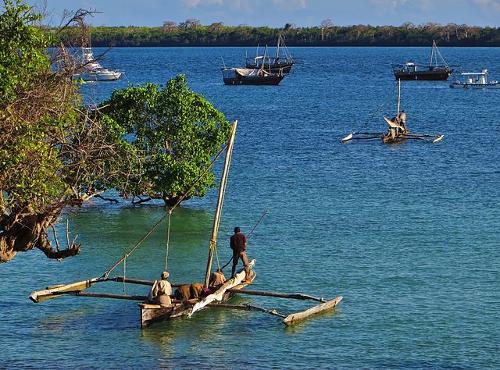 Fishermen on their traditional boats near Shimoni (Kenya)Photo: FredD CC 3.0 Unported no changes made

In addition, the forest stock has been reduced from 30% to 3% over a period of fifty years due to the expansion of agriculture and the increasing demand for wood. An ecological catastrophe is imminent because 25% of the country is already desert-like. The bamboo forests for the large paper factory in Webuye are of economic importance.

Mining is of limited importance. Of the many minerals mined, soda ash is the most important. Other minerals such as silver, gold, lead and limestone have been found, but these are not yet profitable to exploit. 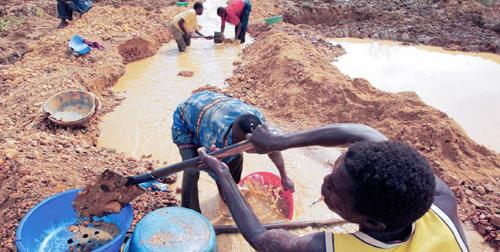 The energy supply mainly depends on imported petroleum. About 70% of the required energy must be imported. Four hydroelectric plants are located along the Tana River and another is located in the Tukwel Gorge.

Approx. 40% of the total industrial production consists of food, beverages and tobacco. Furthermore, mention should be made of the chemical, metal, textile and leather industry and the paper and graphics industry. Most large industrial companies belong to foreign companies. Most companies are located around Nairobi and Mombasa. Some smaller industrial centers are located in Nakuru, Kisumu, Eldoret and Thika.

In addition to large companies that take care of the lion's share of the production, there are numerous small craft businesses. Only 20% of industrial production is destined for export. Annual production growth is entirely based on rising domestic demand.

The trade balance is usually negative. In 2017, exports were worth $ 5.8 billion and $ 16 billion imported. The total deficit was limited due to a positive balance of services, including income from tourism and significant capital imports. Falling coffee and tea prices and rising oil prices, however, exacerbated the deficit. 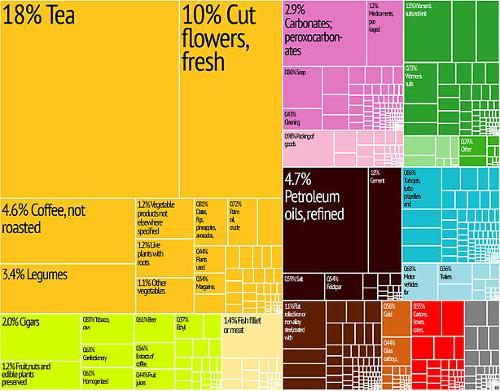 Since 1987, tourism has been the main source of income for Kenya. Yet tourism is vulnerable. The Gulf War and political and ethnic problems caused and continue to generate negative publicity that does not benefit the number of visitors. About 700,000 tourists come to Kenya every year, mainly from Germany, Great Britain, Italy, France and North America. 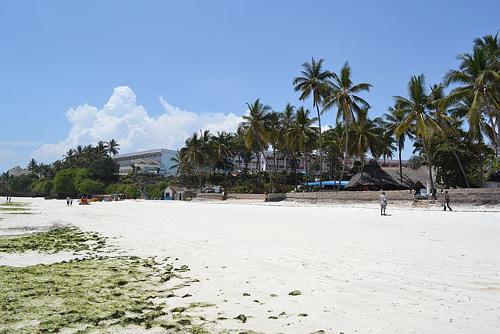 The traffic network in the south is good, but the situation is less favorable in the north. The length of the railways is 2733 km. The line Mombasa-Nairobi-Kisumu is for passenger transport, the other lines are only used for freight. Passenger transport by train is popular in Kenya because it is safer and the trains run reasonably on time. The road network is approximately 62,600 km long, of which 8,300 km is asphalted. The roads are usually in a reasonable condition, sometimes even of excellent quality. Buses and minibuses (matatus) run regularly in all parts of the country. 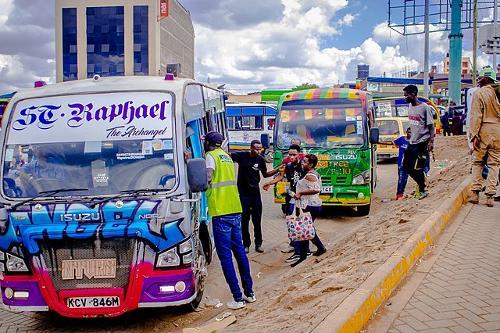 The main seaport is Mombasa. Kenya has its own airline (Kenya Airways) that connects the main cities of Nairobi, Mombasa, Kisumu and Malindi. There are several airports for domestic traffic. Private airlines connect Nairobi with Mombasa, Kisumu, Nanyuki, Malindi, Lamu and the Amboseli, Masai Mara and Samburu national parks. 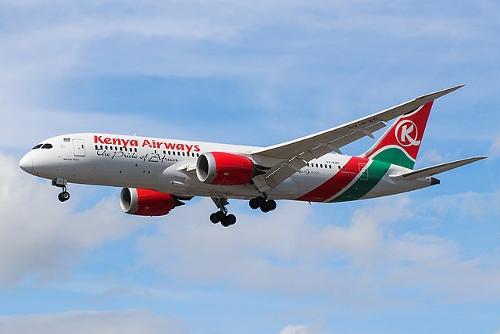