Tanzania (officially in Swahili: Jamhuri ya Muungano wa Tanzania = United Republic of Tanzania) is a republic in East Africa and consists of the former Tanganyika and the islands of Zanzibar (actually Unguja) and Pemba. The Mafia Archipelago is formed by the 50 km long island of Mafia, a dozen smaller islands and countless coral rocks. 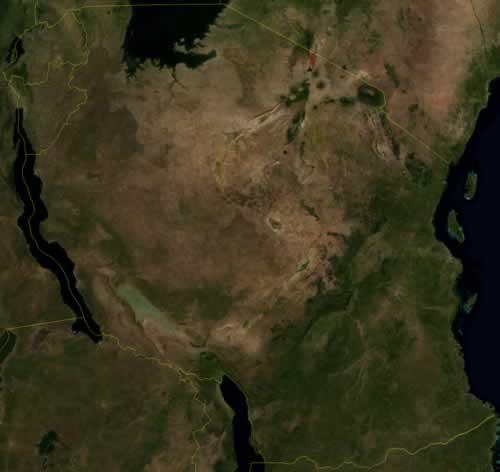 Tanzania is bordered to the north by Kenya (769 km) and Uganda (396 km), to the south by Mozambique (756 km), Malawi (475 km) and Zambia (338 km) and to the west by the Democratic Republic of Congo (459 km), Rwanda (217 km) and Burundi (451 km). Tanzania is entirely bordered by the Indian Ocean in the east and the other borders are also largely made up of water: in the west Lake Tanganyika, in the northwest Lake Victoria and in the southwest Lake Malawi, while the border with Mozambique is the river Rovuma. 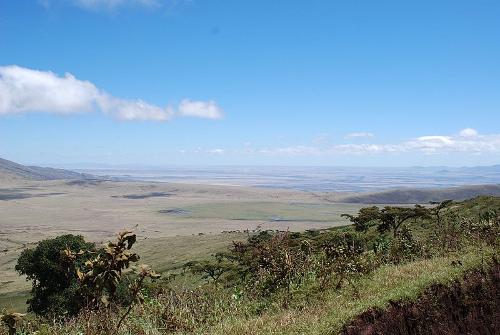 The mainland of Tanzania has a very varied landscape. The Great Rift Valley or Great Rift Valley, which originates in Turkey and runs through the Dead and Red Sea to Ethiopia and splits into eastern and western parts. The western arm of the Rift comes to Tanzania via Uganda; the eastern arm enters Tanzania through Kenya. After the arms of the Rift leave Tanzania, they reunite in Malawi, ending off the coast of Mozambique. The total length of the Great Rift Valley is more than 9,700 kilometers.

As a result of the creation of the Great Rift valley, several large lakes were also created, including Lake Natron, Lake Manyara and Lake Tanganyika, where the lowest point in Africa can be found at 1,430 meters.

Tanzania has many large and small rivers, none of which are navigable. A number of rivers drain into salt lakes; the Pangani, Ruvu, Rufiji and Rovuma flow into the Indian Ocean; the Kagera in the Mediterranean and the Malagarasi in the Atlantic Ocean. Because of the many rivers and lakes, Tanzania has more surface water than any other country on the continent of Africa.

Due to the volcanism present on the border with Kenya, Africa's highest mountain, the volcano Kilimanjaro (5895 meters), has arisen. Tanzania has one more working (strato) volcano in the north at Lake Natron: the Ol Doinyo Lengai or "Mountain of God". The mountain is 2,890 meters high with eruptions in 1917, 1926, 1940 and 1966-67 and the crater has been filling with lava since 1983. Mount Meru is the fifth highest mountain in Africa.

Tanzania also has a fairly narrow coastal strip and a flat to slightly hilly central plateau with an average height of 1200 meters. The predominant landscape in Tanzania is the savannah (including in the Serengeti nature reserve); a landscape with mainly grassland and here and there a tree. Furthermore, the landscape consists of steppe and tropical forest.

The Ambori Caves are the largest cave system in East Africa with ten caves that give access to a network of limestone tunnels estimated to be 200 km long. The largest caves are thirteen meters high. 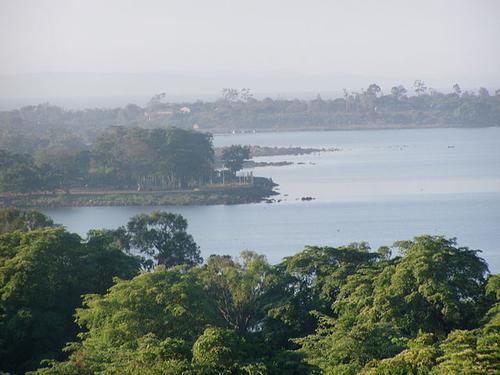 Lake Victoria takes its name from the explorer John Hanning Speke, who was the first European to see the lake in 1858 and named it after Queen Victoria of England.

The surface of the largest lake in Africa is 69,484 km2. The maximum north-south length is 337 km; the maximum east-west latitude 240 km. The total coastline is 3220 km and the lake is surrounded by Kenya, Uganda and Tanzania.

The lake is more than 1100 meters above sea level and has a maximum depth of 81 meters. Lake Victoria is an important source of the Nile and is itself fed by rainwater and by three major rivers: the Kagera, the Katonga and the Mara. In the lake there are dozens of islands, of which Ukerewe is the largest and furthermore, Rubondo Island National Park, unknown to tourists. The sitatunga lives in this park, an antelope that hardly occurs elsewhere.

There are several important ports on the lake: Mwanza, Bukoba and Musoma. Lake Victoria is the second largest freshwater lake in the world, after Lake Titicaca on the border of Bolivia and Peru in South America.

Fifty years ago, 80% of the fish population in the lake consisted of cichlids, now it is only 1%. Many of the 200 native cichlid species have been eaten by the released Nile perch, and the dumping of chemical waste and the drop of oxygen in the water have also been devastating.

Lake Tanganyika is the second deepest lake in the world with a depth of 1550 meters, after Lake Baikal in Russia (1637 m).

There are an estimated 1000 mostly native species of fish living in the gigantic lake. Kigoma is the largest city along the Tanzanian shores. Just above this town is Gombe Stream National Park, with 52 km2 Tanzania’s smallest national aprk and made famous by Jane Goodall's chimpanzee research project. 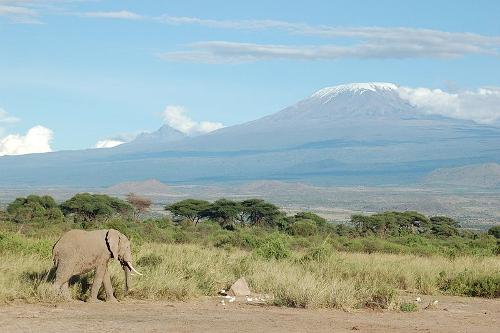 Kilimanjaro, the highest mountain in the continent of Africa, actually has three peaks, the highest of which is Kibo at 5895 meters. The Mawenzi is 5,149 meters high and the Shira "only" 3,962 meters. The three peaks are actually three volcanoes, the last eruptions of which date back to 100,000 years ago. The crater of the Kibo is 200 meters deep and still contains active fumarols (= vapor and gas source in a volcano).

The slopes of Kilimanjaro are very fertile and many crops grow up to 1400 meters. The lowest parts of the mountain consist of savannah, from 1800 meters there is dense forest. Above 3000 meters, the frost line, not much grows anymore. The top consists of snow and ice.

The Chagga tribe has populated the slopes of Kilimanjaro for many centuries. The Kilimanjaro National Park covers an area of 760 km2. 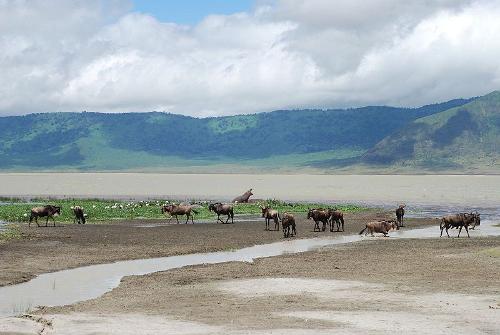 The Ngorongoro crater is the largest still intact caldera (= funnel-shaped crater in a volcano formed by collapse) in the world, with a diameter of approximately 18 kilometers, an area of 260 km2 and a crater wall that is no more than 600 meters high.

The crater is inhabited by approximately 40,000 Maasai, who expelled the Mbulu and Datoga 200 years ago. In 1951 the area of the crater was incorporated into the Serengeti National Park and from 1978 UNESCO declared the crater a World Heritage Site of humanity.

The crater is located in the Ngorongoro Reserve (Ngorongoro Game Reserve; 8000 km2) and an estimated 30,000 animals live in the crater. This makes this one of the most densely populated wildlife areas in the world.

A remarkable phenomenon are the "shifting sands", a kind of dune, formed about 30,000 years ago during an eruption of the Ol Donyo Lengai volcano. Each year, during the dry season, the 100-meter-long and 9-meter-high ash and sand "dune" moves an average of approximately 17 meters in an easterly direction.