Already in the centuries around the beginning of our era, many Jews have left Palestine. They settled in all parts of the then known world: Asia Minor, Greece, Italy, Egypt and North Africa. These Jews mainly live in flourishing and extensive trading colonies. At the time, it is believed that more Jews lived outside Palestine than within its borders. In the course of the Middle Ages, Jews settled in most European countries, but also in the countries of the Middle East, Asia to China. 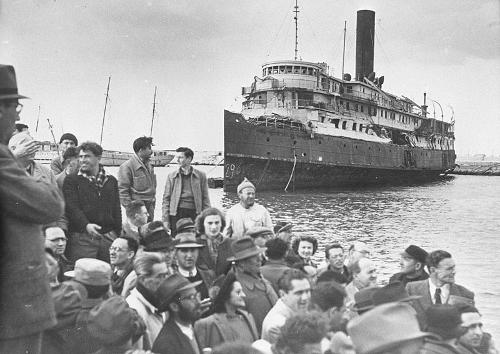 The first groups of immigrants in the 15th and 16th centuries came from Spain and Portugal, from where they were expelled for their faith. The link between persecution and migration will continue to this day.

Worldwide, some 15 million Jews currently live, about half of whom live in Israel and a third in the United States.

Israel had 8.3 million inhabitants in 2017 (including East Jerusalem and the annexed Golan Heights), 75% of whom were Jews and almost 25% Arabs. By place of birth, the following distinction can be made among the Jews: Israeli by birth 76.3%, European / American by birth 16.2%, African by birth 4.8% and Asian by birth 2.7%. About 187,000 Jews live in the West Bank, about 5,000 in the Gaza Strip, about 20,000 in the Golan Heights and about 175,000 in East Jerusalem. Today more than 1.5 million Arabs live in Israel, 80% of whom are Muslims. The remaining 20% consists of Christians and Druze. About 1.7 million Palestinians live in the West Bank and East Jerusalem.

Most of the Palestinians live in the countryside and in the cities of the territories occupied by Israel. The number of residents of the collective kibbutz has decreased significantly since 1948 in favor of the cooperative Moshavim. The Moshavim is an agricultural living pattern, in which about 4% of the Israeli population lives. The land is jointly owned and managed jointly.

The growth of the Jewish population in Israel has been very significant in a number of periods. In the period from 1948 to 1980 there was even talk of a growth of over 300%, until the early 1970s mainly a result of the enormous immigration. Since then, immigration has fallen sharply (in 1987 the number of emigrants exceeded that of the immigrants). From the early 1990s, many Jews immigrated from the Soviet Union. Since 1948, more than 2 million people have immigrated to Israel and it is therefore sometimes said that Israel is one nation, made up of a hundred nationalities. A global dichotomy that can be made distinguishes between Ashkenazi and Sephardi Jews. The Ashkenazim mainly come from the countries north of the Mediterranean. Sephardic Jews come from the countries south and east of the Mediterranean.

The composition of the Jewish population is very diverse. In general eight groups can be distinguished according to origin:

-A rather heterogeneous category of pre-modern immigration (aliyah) Jewish residents of Palestine. In 1882, the year in which modern Jewish emigration to Palestine actually began, there were approximately 24,000 Jews living in Eretz Yisrael.

- The approximately 150,000 Jews who entered the country as settlers in four waves between 1882 and 1931, mainly come from Eastern European countries.

-A number of more than 300,000 Jews from Central Europe, especially Germany and the territories occupied by Germany, who fled from their country of birth.

-The Jews who entered the country legally or illegally in the period 1945-1948, predominantly Jews who had escaped Nazi persecution or survived the concentration camps.

-The hundreds of thousands of Jews after 1948 who poured into the country from Iraq, Yemen and North Africa, in the eighties also from Iran and Ethiopia, the Falashas. The emigration of the Ethiopian Jews took place through Operation Moses, in which in the eighties and nineties of the last century approximately 30,000 people were brought to Israel in two stages.

-The Sabras, the Jews born in Israel (now by far the majority of the population).

-East European immigrants from after 1957, especially many from the Soviet Union after 1989.

-Zionists from the European countries, North and South America, South Africa and Australia.

Population growth was 1.51% in 2017 (birth rate 18.1 per 1000 inhabitants, death rate 5.2). The birth rate of the Palestinian population in Israel is greater than that of the Jewish population, while the death rates are almost the same.