Tourism has become of great importance to the Israeli economy since the 1990s. A lot of foreign money comes in and many people have found a job in tourism. The problem for Israel is political instability in the region, which means that the number of tourists can vary widely each year. Most tourists come from the United States, Germany, France and the Netherlands In the first half of 2008, more than 1.5 million international travelers visited the country. Israel expects to attract about 2.8 million visitors throughout 2008. Well-known attractions are the Dead Sea, the City of Tel-Aviv, Jerusalem and Eilat, the latter two are discussed in more detail below. 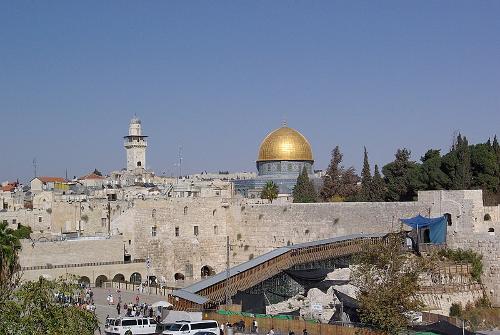 A visit to the city of Jerusalem, which is sacred to Christians as well as Muslims and Jews is one of those things you must do once in your life. A must visit place in the city is the Wailing Wall or the Kotel on the Temple Mount. The wall is a remnant of the Jewish Temple that once stood there, it was the western part. That is why it is also called the Western Wall. Jews have been gathering here since 70 BC to pray. Traditionally, notes with wishes are placed between the stones of the wall. The Western Wall is the stage for many festive events such as Bar Mitzwa’s. The Church of the Holy Sepulcher is Jerusalem's main Christian pilgrimage site. It is believed that Jesus was crucified and buried here. The church dates from 1149 and is built in the Gothic style. This holy place is well worth a visit. The Dome of the Rock, with its impressive golden dome, should not be missing from this list. Like the Wailing Wall and the Church of the Holy Sepulcher, this is a place of great religious importance. This is where Mohammend is said to have started his journey to heaven and Abraham is said to have sacrificed his son here. Believe this or not, the Dome of the Rock is a particularly beautiful building and well worth seeing. The dome was built in 691 and Quranic verses can be found on the walls. The ceiling painting is also very worthwhile.

Eilat has become Israel's vacation paradise in recent years. The Israelis themselves discovered this a long time ago, but now the resort is also gaining fame among foreign holidaymakers. The attraction of the town mainly consists of the rich underwater world and the pleasant climate. The reef off the coast of Eilat is home to over 230 species of coral, home to the most wonderful fish and even turtles and dolphins. A vacation in Eilat simply cannot pass without checking out the coral reef. Diving and snorkelling are of course possible, but also a fun way to admire the underwater life is a trip in a glass bottom boat, so that you can see everything below the surface. Interested in more natural beauty? Not far from the seaside resort you will find the Timna Valley, where copper ore was formerly extracted, but which is now a nature park where the special Pillars of Solomon, the Mushroom and the famous arches have been carved in the rocks.