The period after the proclamation of the State of Israel in 1948 to 1973 was characterized by rapid growth of the economy: the gross national product (GNP) increased by approximately 9% annually. This development was made possible by large capital imports in the form of foreign aid and loans, large donations from Jews outside Israel, payments and supplies in the context of German reparations and increased productivity. 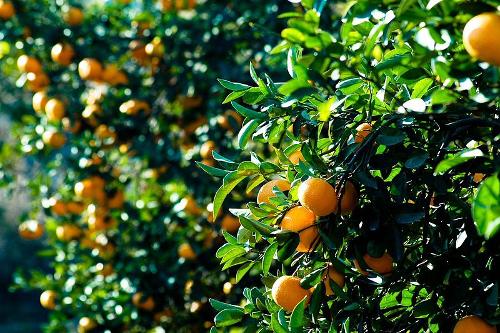 About 20% of Israel is cultivated for agriculture, about 4100 km2. Domestic production provides the vast majority of Israel's food needs, and that has been agricultural policy since 1948. The significance of the agricultural sector for the Israeli economy has declined dramatically since 1948, from over 60% in 1948 to just over dn 1% in 2017. The mosjavim and the kibbutzim are the most important business form in agriculture. However, many of these cooperatives were in financial difficulties. Given the low annual rainfall, irrigation is essential. Advanced irrigation systems are used to make more and more land in more southern desert-like areas suitable for agricultural purposes. Citrus fruits are the principal agricultural produce, and the production of horticultural crops such as vegetables and flowers, as well as cotton, dates, olives, almonds, grapes, avocados and bananas are important. In recent years, more and more investments have been made in new products, mainly floriculture, advanced technology and know-how. About 90% of the flower production, intended for export, goes to the Netherlands, where it is auctioned and distributed to the rest of Europe. Bulk production is increasingly being abandoned. Grain is mainly grown in the valleys of Jezreel and Harod.

Livestock farming mainly includes sheep, goats, cattle and poultry. Israel provides for its own needs for milk, eggs, chicken and turkey. Beef and mutton often have to be imported.

Forestry is of exceptional importance, given the great hydrological value of the forests. More than 600 km2 is occupied by forest.

Fishing is practiced in the Mediterranean and the Atlantic, but is not very economic. Freshwater fish supplies Lake Kinneret and the fish farming ponds (carp) in the former Choelemeer area. Most fish is currently still being imported, about 90,000 tons.

The Dead Sea contains billions of tons of various salts. In modern Sodom, the Dead Sea Works extract potassium carbonate and bromine from it, using natural gas extracted at Arad. Israel is the world's largest exporter of bromine. Furthermore, the Negev desert in particular is rich in minerals such as copper, phosphate, marble, gypsum and glass sand. The exploitation of minerals is predominantly in the hands of the state. The raw materials for the chemical industry are extracted from the natural resources of Israel, mainly minerals such as potash, magnesium and bromide from the Dead Sea and phosphate from the Negev. 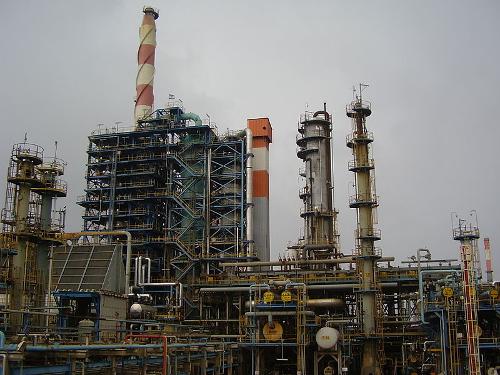 Refinery in Haifa, IsraelPhoto: Pikiwikisrael CC 2.5 Generic no changes made

By far the most important energy source is petroleum, which, however, must be imported almost entirely. After the return of Abu Rodeis' fields in 1975 and the Alma fields to Egypt in 1979, the United States has guaranteed Israeli oil supplies. Ashdod and Haifa have refineries, and small oil fields have been found at Ashdod. The Haifa refinery has a capacity of more than 6 million tons per year, more than enough to meet its own needs. Natural gas is extracted from the Dead Sea, but exploitable gas fields have now also been discovered in the portion of the Mediterranean Sea under Israeli authority.

In 1979, a coal-fired power plant in Hadera was commissioned. Much value is attached to the development of nuclear energy. In 1976 an agreement was signed with the United States for the construction of two nuclear power plants, the first of which was commissioned in 1986. A small hydroelectric power station is located on the Jarmuk, a tributary of the Jordan. Many houses are equipped with amenities that allow you to take advantage of solar energy. Israel is committed to the development of alternative and clean energy sources and is already the world leader in solar energy.

Due to the current water crisis, Israel will invest approximately 4 billion euros in water management and water supplies over the next ten years. These funds mainly go to desalination facilities and also to other purification facilities and other supplies. This is desperately needed, because the population growth is expected to double current water consumption. Dry winters have highlighted the need for structural solutions, not just for Israel, but for the entire region. The water supply for Israel is also closely linked to the security issue. Two thirds of the water sources are outside Israel, on the Golan Heights and the West Bank. For the time being, a lot of water will still have to be imported. 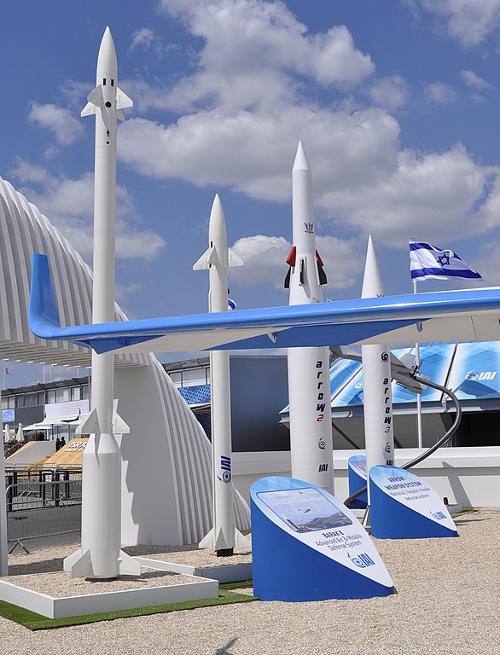 The lack of raw materials and energy and the small domestic market mean that industrial development is limited. The fastest growing industrial sectors are the capital-intensive electronic and metal industries, including aircraft construction and the arms industry. The chemical industry is one of the driving forces in the Israeli economy. In 2017, this sector constituted 25% of the total industry and one of the main export sectors of Israel (70% goes to the United States). Food and textile industry declined in importance. Also important are diamond, cement and wood processing.

The software industry is very important to the Israeli high-tech sector, with sales of billions of dollars and approximately 13,000 most highly educated employees. Initially this sector relied mainly on the military sector, nowadays the emphasis has shifted to civil applications. 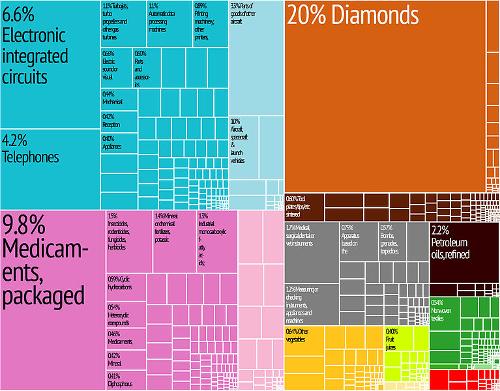 The highways connecting Eilat to Haifa form a significant road link between the Red Sea and the Mediterranean. The road network covers more than 20,000 kilometers, of which 500 km consists of four-lane roads.

There are a number of railway lines (total length 1275 km), but their density is low. The railway line going south from Beersjeba to Eilat is important for opening up the Negev. However, as the railways are very sensitive to attacks, few goods and people are transported by train. There are plans at central and local level for the expansion and improvement of the national railway network and the construction of light rail connections in the major cities.

Much use is made of the sjerut taxis, collective taxis, in which people only pay for their own seat. A striking feature in the infrastructure of the Occupied Territories is the network of Israeli roads. These are not accessible to Palestinian residents and form a kind of corridors between the various Jewish settlements and the Israeli territory.

For a long time, Israel had only one modern seaport, namely Haifa. The outdated port of Jaffa-Tel Aviv has closed; In Ashdod, 30 km south of Tel Aviv, a second Mediterranean seaport was built in 1965, and the new seaport of Eilat was established in the same year. Israel Shipyards in Haifa is one of the largest shipyards in the Eastern Mediterranean.

There are passenger ferry services from Haifa to Cyprus, Greece and Italy. Eilat is mainly used for import from and export to Asia and Australia. The main shipping company is Zim Israel Navigation, one of the ten largest container shipping companies in the world.

The international airport is Ben Gurion in Lydda (Lod) near Tel Aviv. The Israeli airline El Al from there maintains air connections with four continents. Foreign airlines also regularly fly to Ben Goerion. The other Israeli airports only have significance for domestic traffic, provided by the airline Arkia.

Israel is one of the world leaders in aircraft technology, including Israel Aircraft Industries.

Economy in the Occupied Territories 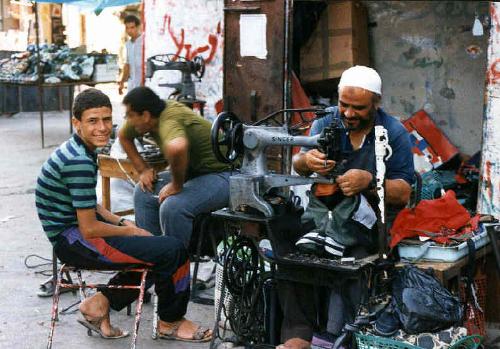 In many ways, the Palestinian economy has characteristics of a developing country: malfunctioning government services, poorly developed infrastructure, unclear tax laws and a lack of a well-functioning banking system. On the other hand, the Palestinian population is highly educated and there are many skilled workers.