The Jewish religion is based on the belief in one god and the covenant that God made with the Jewish people, the history of which began about 4,000 years ago with the era of Abraham. All aspects of Judaism originate from the Torah, the Mosaic Law. Together with the rabbinic commentaries, the Torah is the source of inspiration for the ideas and practices of all Jewish communities.

The Talmud is a set of beliefs that are the foundation of Judaism to this day. This collection consists of the "Mishna", which contains, in addition to the Torah, commandments and prohibitions, and the "Gemara", which contains rules of life and interpretations of the Torah.

Public life in Israel is dominated by the Jewish religion. The Sabbath rest has even been legislated, supplemented by local arrangements. The traditionally orthodox view of the Torah with its "248 Commandments and 365 Prohibitions" is a source of difficulty for public life in modern times.

The Chief Rabbinate, the highest religious institution of the Jews in Israel, consists of an Ashkenazi and a Sephardic Chief Rabbi. Rabbis are not priests, but teachers who, through their knowledge of the Talmud, come to different interpretations of the scriptures. The liberal Jews enjoy, at least in theory, the same facilities as other religious groups in building synagogues, but their rabbis are still not recognized as such.

The Hebrew calendar has a number of holidays that commemorate important events in the history of the Jewish people.

Feast of Tabernacles or Sukkot

This festival is held in memory of the return of the Jewish people to the Promised Land, when the Israelites still lived in tents and huts. The festival also marks the end of the agricultural season and the beginning of the annual cycle of the Torah. The Feast of Tabernacles begins five days after Yom Kippur.

The Feast of Fate, which commemorates the liberation of the Jews from the Persian occupation.

This day celebrates the day when the independent state of Israel was proclaimed in 1948.

The Jewish New Year is celebrated for eight days and this week is concluded by Yom Kippur or the Day of Atonement, the holiest day of the Jews, where the fate of man is determined by the balance between good and evil deeds.

The feast of light, the rededication of the Temple in Jerusalem after the victory over the Syrians by the Maccabees.

This festival celebrates the Exodus from Egypt and commemorates the killing of the firstborn by the strangler.

Shavuot or Feast of Weeks falls seven weeks after Pesach. On this harvest festival the first fruits are offered in the Temple and it is commemorated that the Torah was given to the Jewish people. 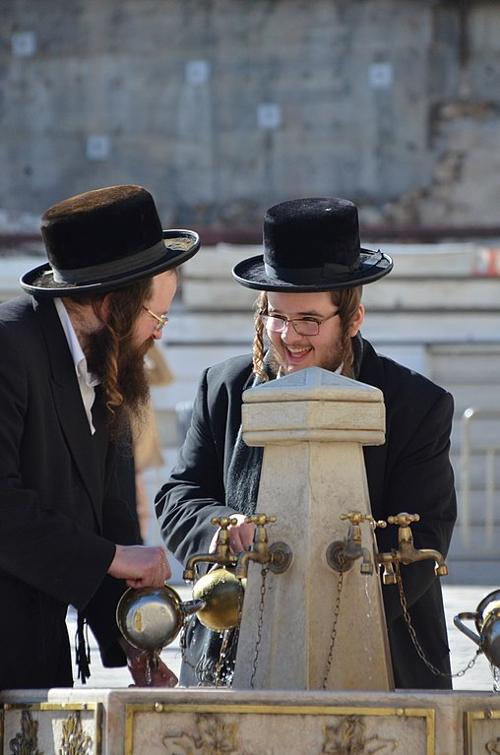 Some Jewish Communities are:

These Jews can be recognized by their yarmulke or "kipa", a small cap worn on the back of the head. They are convinced that man is responsible for history, and therefore participate fully in the social, economic and cultural life in Israel.

This liberal movement emerged in the 19th century and aimed to facilitate strict religious practices and rules. Even now people are still committed to the achievements of Western society.

These pioneers of the idea of a Jewish state were strongly anti-religious. This does not alter the fact that they simply observe all Jewish holidays and eat kosher foods.

These Orthodox anti-Zionists emerged in Central Europe in the 18th century. They refuse to recognize the political authority of the state and do not view Zionism in the perspective of an explicit relationship with God. They value prayer more than study.

The Holy Scriptures and the prophets foretold the coming of a Messiah. In the Christian faith, the living God of Israel has taken the form of the man Jesus Christ. After his death it became the task of man to build up the Kingdom of God.

Jesus was born between 7 and 5 BC. in Bethlehem and lived in Nazareth. Between the ages of 28 and 30 he went with his disciples to Jerusalem via Galilee. On Easter of AD 30, he was sentenced to death and crucified by the Roman occupier.

After the crucifixion and resurrection, the apostles began to teach his teachings. The converted Jews were first called Christians in Antioch. The teachings of Christ were recorded in the four Gospels. The first three were written between the years 70 and 80, the fourth gospel around the year 100. They were written by the apostles Matthew, Mark, Luke, and John.

Bethlehem, Church of the NativityPhoto: Abraham CC 3.0 Unported no changes made

On Christmas Eve, Catholics celebrate the birth of Christ.

All Christians celebrate the crucifixion and resurrection of Jesus Christ on this day. Easter concludes Holy Week and the 40-day Lent. The Orthodox Easter celebration is accompanied by many celebrations and the faithful light candles for a month.

This feast has been celebrated since the 7th century, when the transition of Mary, the mother of Jesus, to life with God is commemorated.

Forty days after Jesus' crucifixion and resurrection, he gathered his followers and took them to a mountain on the east side of Jerusalem. There he told them that he had finished his work on earth and that he was going to leave for heaven.

Fifty days after Easter, the Holy Spirit was celebrated on the congregation of faith and the foundation of the Church in Jerusalem is commemorated.

This feast is celebrated in the Eastern Churches and celebrates the unity of humanity and the divine nature of Christ, as well as the unity of the Old and New Testaments.

The Christian minority in Israel is represented by seventeen denominations. The many divisions in Christianity have resulted from theological differences and the growing divide between East and West. Following is a description of some of the important Christian denominations present in Israel:

In the mid-18th century, the Armenian people founded a Catholic church. The Armenian Patriarchate of Jerusalem is under the supreme authority of the Armenian Church and numbers about 2500 persons.

A Coptic Patriarchate has been established in Jerusalem since 1899. The Christian Copts come from Egypt and are closely associated with the hermits of the desert, Antony and Pachomius, and the monastic fathers Anasthasius and Cyril of Alexandria.

Jerusalem's Greek Orthodox Community is headed by a patriarch and assisted by a synod of bishops, archimandrites and priests. They all still have the Greek nationality.

The Ethiopians were Christianized in the 6th century. An archbishop is at the head of the Jerusalem Church.

Lutherans, Anglicans, Baptists, and various National Churches, such as the Scottish and Danish Churches, are all represented in Jerusalem.

The Maronite community, of Syrian Christians in origin, was founded in 410 by Saint Maron, and makes up the majority of Christians in Lebanon. About 6,000 Maronites were victorious in Israel.

Islam, a monotheistic religion, is inspired by the Holy Scriptures (Old and New Testaments), and calls for submission to Allah and His divine word, the Quran, as revealed to the Prophet Muhammad by the angel Gabriel.

Five Pillars of IslamPhoto: Xxedcxx CC 3.0 Unported no changes made

Islam is based on the Quran and the Sunna (tradition), the account of the actions and words of the Prophet Muhammad. The five pillars of Islam are: the profession of faith, prayer, almsgiving, fasting during Ramadan and the pilgrimage to Mecca.

Allah speaks through the mouth of Muhammad and is part of the line of prophets that begins with Adam and continues with Noah, Abraham, Moses, Solomon, Joseph and Jesus, among others.

The Quran was written at the time of Othman and consists of 114 chapters or suras, divided into 6243 verses or aja.

Muslims pray five times a day, addressing the holy place of Mecca. The creed consists of uttering the words, "There is no God but Allah and Muhammad is his prophet." When this so-called "shahada" is publicly repeated three times, this is the sign of conversion to Islam.

Another pillar of Islam is the pilgrimage or "hajj". At least once in his life a Muslim must have made a pilgrimage to Mecca. Dressed in white, he must walk around the Kaaba and walk seven times between the hills of Safa and Marwa, the "omra" ritual.

The Dome of the Rock and Al Aqsa Mosque in Jerusalem have been the second most sacred sites of Islam after Mecca and Medina since the 7th century.

Al Aqsa Mosque in JerusalemPhoto: Boubakar in the public domain

In Israel there are two main schools of Islam: the Sunnis and the Shias. The Sunnis strongly adhere to the legal aspect of Islam, that is, the law or "Sharia" and Islamic law or "fire". They have four schools of law, the Malikites, the Hanefites, the Caafiites and the Hanbalites. Palestinian Muslims adhere to the Chafi and Hanefite school.

The Shias are a minority in Israel. They are followers of Ali, who in their eyes, along with his sons Hassan and Hussein, are the only one to receive the Prophet's "will". In the eyes of the Shias, Ali is therefore the only legitimate successor to Mohammed.

A small, but emphatically present group are the Druze. The Druze have split off from the Shias again. The Shias recognize twelve Imams as successors to Ali. The Druze limit that number to seven. They settled in Palestine around the year 1000 and adhere to a mixture of Islam and Greek and Indian philosophies. Their texts and ceremonies are secret. The Druze have also had the status of an autonomous religious community since 1957.

This festival celebrates the birth of the Prophet Muhammad.

On the first day of the ninth month, in which the Divine Word was revealed to the prophet, Ramadan begins, which is why the believers are supposed to fast from sunrise to sunset.

The first day of the month of Shawwal is the end of Lent. On that evening they eat pasta with dried apricots (amar ed-din).

The 17th day of the month of Rajab commemorates Muhammad's nocturnal journey from Mecca to Jerusalem, where he ascended to heaven.

On the tenth day of dhu-el-Hijja they celebrate the sacrifice of Abraham, and each family slaughters a sheep. 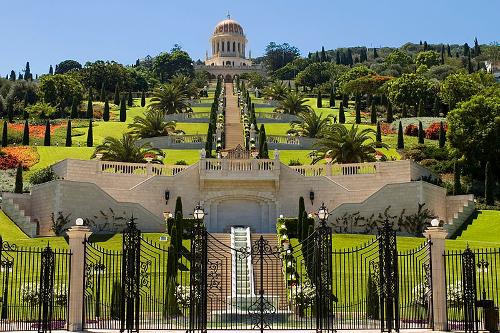 The Bahá'ís are officially recognized as the fourth faith community. The Bahá'í Faith is the youngest world religion (1844) with independent revelation and has about 6 million adherents throughout the world. It teaches that through a series of prophets (including Moses, Buddha, Jesus, Mohammed) God conveys to the people the basic teachings that are needed at that time. According to the Bahá'í Faith, the world is one country and all people are brothers and sisters. The center of the Bahá'í Faith is in Haifa, amid beautifully landscaped gardens and terraces that take the visitor all the way up from the base of Mount Carmel. There are a number of buildings on the site, including a tomb with a golden dome. It was built in 1909 by Abdu'l-Bahá, son of the founder of the Bahá'í Faith, Bahá'u'lláh.

The Samaritans were already persecuted in the Bible as a religious community. It now consists of only about 100 families living near the sacred Mount Gerazim near Nablus. They consider the Torah, the first five books of the Old Testament, and the Book of Joshua to be holy scriptures. Their first language is Arabic.

The 15,000 Karaites is a religious group that believes in the Torah as God's Word, but rejects all later writings. They are neither Arabic nor Islamic in origin and even have their own language.