The US state of Arizona, nicknamed the 'Grand Canyon State' or the 'Copper State', has an area of 295,234 km². From north to south, the length of Arizona is up to 630 km, from east to west the distance is up to 545 km. In terms of area, Arizona, located in the Southwestern United States, is the sixth largest US states in the world. 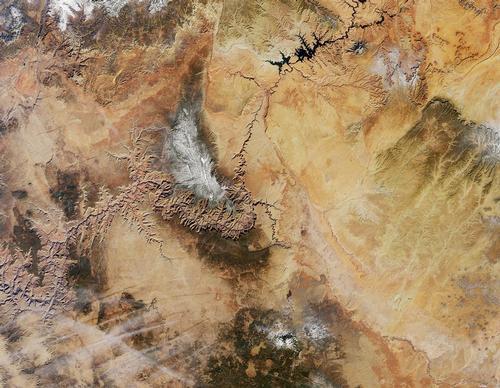 Arizona is bordered to the south by Mexico (626 km), in the north on the states Utah and Colorado, on the west to Nevada and California and to the east to New Mexico. The point where the borders with Utah, New Mexico and Colorado meet is called Four Corners. The Colorado River forms the border with Nevada and California for a great length. The total border length of Arizona is 2,379 km. 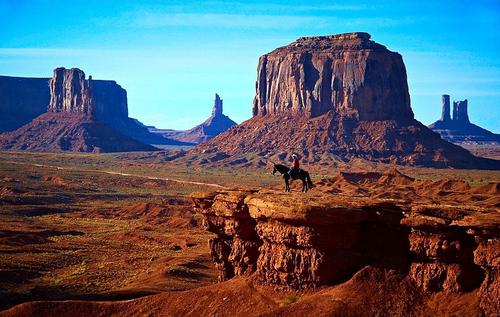 The landscape of Arizona is very varied in shape, but can certainly also be called colorful. This variety and richness of color was mainly caused by volcanic eruptions, soil elevations and erosion by wind and water, which also created the characteristic canyons and arches in this state.
The Arizona landscape can be divided into three geographic regions: the Colorado Plateau (336,700 km2) in the north, the Transition Zone in the center and the Basin and Range in the south and southwest of the state. the Colorado Plateau is especially defining for the landscape of Arizona, This plateau, whose height varies from 600-3900 meters above sea level, is characterized by the presence of deserts, wooded mountain peaks, jagged sand formations, green river valleys and deep gorges of which the Grand Canyon is the best, world-famous example. The mostly pine-wooded slopes are mainly around the northern city of Flagstaff, with the Kaibab National Forest, Prescott National Forest and Coconino National Forest.
The Transition Zone is located just south of the Colorado Plateau and north of the Basin and Range. This narrow strip of land is dominated by a number of rugged mountain ridges, including the Mazatzal, Santa Maria, Sierra Ancha and White Mountains, and valleys.
South of the Transition Zone and a narrow strip along the western border with California is the Basin and Ridge, which is characterized by the presence of a number of mountain ridges with names such as Chiricahua, Gila, Huachuca, Hualapai, Pinaleno, Santa Catalina Santa Rita, and Superstition, which lie from the northwest in a southeast direction and are separated from each other through fertile valleys. This is also where the lowest point in the state of Arizona is located, near the city of Yuma, the Colorado River flows at a height of 21 meters above sea level. 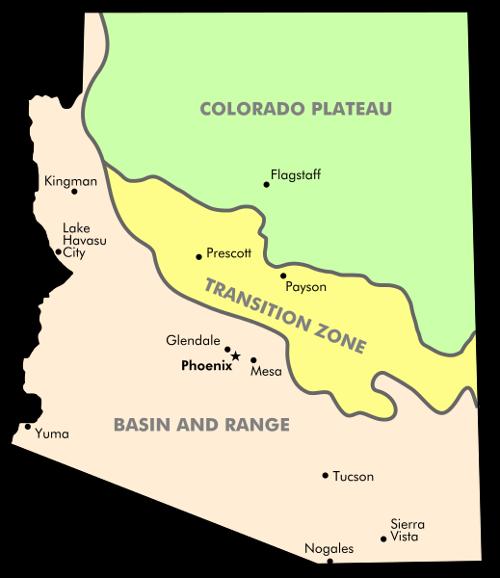 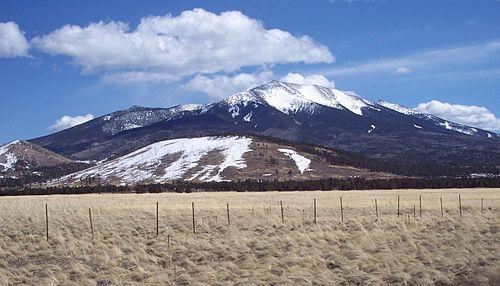 At the same time, Arizona is largely desert, with a strip of the high-lying Mojave Desert (Mojave Desert) in the northwest of the state and the much lower Sonoran Desert to the south ( Sonora Desert), which extends into Mexico. In the northeast, Arizona is just touched by the Great Basin Desert, the largest desert in the United States, mainly located in Nevada and Utah.
The up to 600 meters high Mogollon Rim, named after Don Juan Ignacio Flores Mogollon, a 18th century Spanish governor of the province of New Mexico, is a sheer cliff that runs for 320 km from Central Arizona (Yavapai County) to the border with Southwestern New Mexico, forming the southern edge of the Colorado Plateau and Arizona practically in half. This is also where the largest ponderosa forest in the world can be found. Near Payson, Pine Creek cut its way through a calcium carbonate dam, creating the largest travertine (limestone) bridge in the world, the Tonto Natural Bridge. 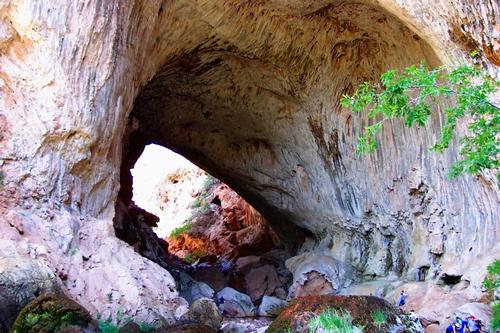 The Kartchner Caverns are located in the Whetstone Mountains and were only discovered in 1974. The 3 ha cave complex, with a length of almost 4 km, contains enormous stalactites and stalagmites, but also the longest so-called straw stalactite, 6 meters high and only 5 cm thick. Approx. 35 km east of Tucson is Colossal Cave Mountain Park, home to the largest dry cave in the world.
Arizona's second city, Tucson, is wedged between four mountain ranges, the Santa Catalina Mountains to the north, the Ricon Mountains to the east, the Santa Rita Mountains to the south, and the Tucson Mountains to the west.

Arizona's main river is the Colorado, which forms part of its western border. The river has its source in the Rocky Mountain National Park in Colorado (La Poudre Pass Lake), flows through the famous Grand Canyon, has a total length of 2330 km and visits no fewer than five states, Colorado, Utah, Arizona, Nevada and California.
The main tributary of the Colorado is the Gila River, which has a total length of 1,044 km, and flows through New Mexico in addition to Arizona. Other important tributaries are Green River, Utah, San Juan River, Utah, Little Colorado River, Arizona, Dolores River, Utah, Gunnison River, Colorado, and Virgin River, Nevada. 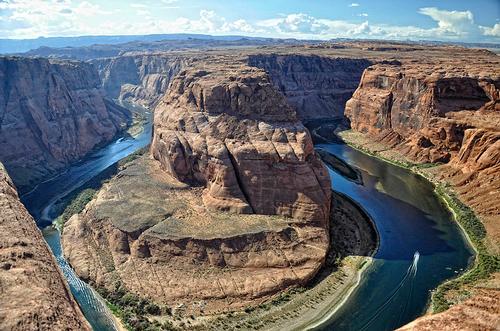 Rivers in Arizona over 200 km in length

Very special in the landscape east of the Flagstaff's town is the Meteor Crater, one of the largest meteor craters in the world with a diameter of 1,265 meters, a circumference of 5 km and a depth of 174 meters. The impact took place some 50,000 years ago and more than 300 million tons of boulders and earth were displaced in one fell swoop. 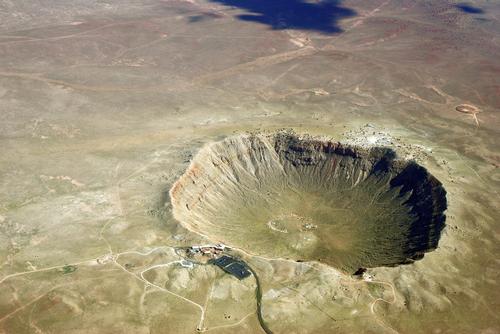 Another scenecally interesting place is is 'Painted Desert', a large area of reddish hills in the 378 km2 Petrified Forest National Park, a national park since 1962, which changes in many colors during the day depending on the sun. In addition, the presence of many dinosaur bones and petroglyphs makes it a perfect area for paleontologists.
To the south of Petrified Forest National Park is another lunar landscape with a forest of fossilized 225 million year old tree trunks, some with a diameter of 1.80 meters, and here too the beautiful hues are a real attraction. 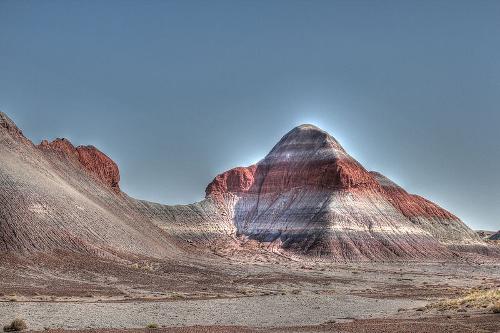 The second largest artificial reservoir in the United States, Lake Powell (640 km2), is spread across the territory of Northern Arizona and especially Southern Utah. After the opening of the Glen Canyon dam in 1966, it took until 1983 for the entire canyon carved out by the Colorado River to be filled with water. In total, the shores of the very jagged lake stretch over 3,140 km. The maximum length of the lake is 299 km, the maximum width 40 km, the average depth 40 meters and the maximum depth 170 meters. A special feature is the Rainbow Bridge National Monument, an 83m high sandstone arch that completely spans the Glen Canyon at that site and is probably the largest natural arch bridge in the world.
Other important reservoirs are on the border with California;Lake Havasu and Lake Mead on the Nevada border. Lake Mead is the largest man-made lake in the United States with an area of 650 km2, a maximum length of 190 km and a depth of up to 149 meters. The total coastal length of Lake Mead is 885 km. Lake Havasu has an area of 78 km2, a length of 73 km, an average depth of 11 meters and a maximum depth of 27 meters.
(Theodore) Roosevelt Lake is with an area of 85 km2 and a coastline of 206 km the largest lake in its entirety within the boundaries of Arizona. Other large lakes are San Carlos Lake (79 km2) and (New) Lake Pleasant (35 km2). 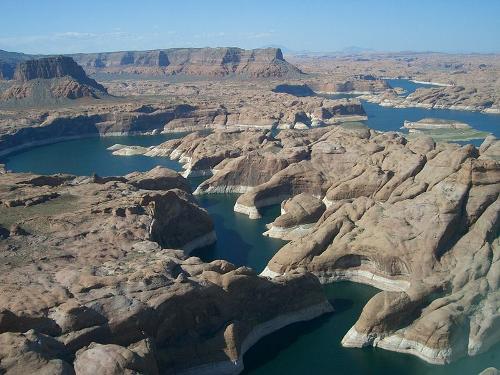 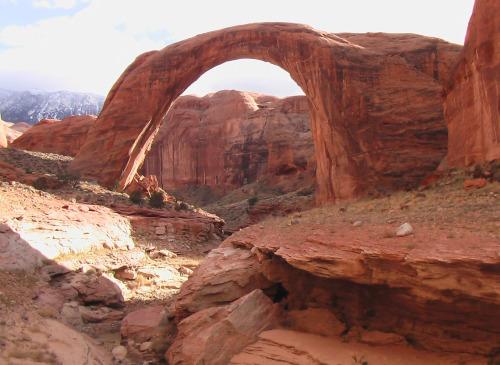 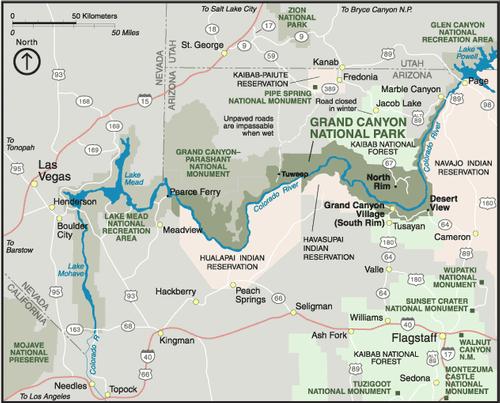 One of the most remarkable geological phenomena on Earth is the Grand Canyon, which was created 5-6 million years ago by the Colorado River cutting its way through the hard and soft rock. The many colors of the stone layers each reflect a different geological era, the oldest layers date from about 2 billion years ago.

The Grand Canyon extends for a length of about 445 km from Northern Arizona to Southern Utah and has an area of about 4856 km2, just slightly smaller than the province of North Brabant (4913 km2). The Grand Canyon is a maximum of approximately 18 miles wide, a minimum of only 180 meters and in some places 1,829 meters deep. The North Rim is about 300 meters higher than the South Rim of the canyon.

Due to the height differences, the Grand Canyon has seven climate belts and a great biodiversity with more than 1500 plant species, 305 bird species and 76 mammal species. At the bottom of the Grand Canyon, temperatures can reach up to 43°C.

Proven human activities date back to the second millennium BC, and around 500 AD. appeared the Anasazi, the ancestors of the Pueblo Indians. About 2,000 residences have been found along the entire length of the Grand Canyon, but the Anasazi disappeared from the Grand Canyon eastward in the late 13th century.

The Grand Canyon was bought from the Mexicans in 1848 and declared a national park in 1919. 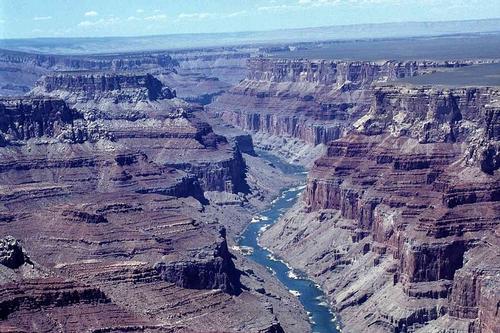