Tens of thousands of years ago, Tunisia looked very different from today. It had a humid climate with lots of forests and other vegetation. The residents traveled in small groups and lived off hunting and fishing. However, the climate became drier and people moved from the south to the north. Frescoes on rock walls are a reminder of this time. From 5000 to 6000 BC. people started keeping animals and growing crops. The itinerant existence was exchanged for a permanent place of residence. About 1100 BC. the Phoenicians were a powerful seafaring people who founded many settlements along the African coast. In 814 BC. Carthage was founded, which would quickly develop into a political and military superpower and also develop into a thriving commercial center. 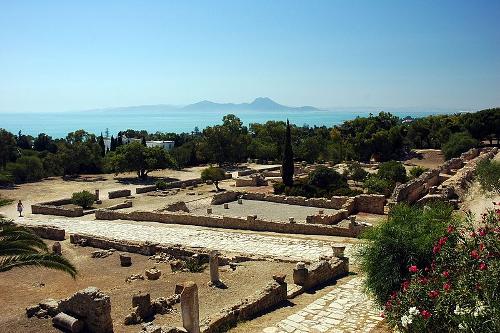 Remains of the city of Carthage, TunisiaPhoto: Calips CC 3.0 Unported no changes made

Carthage came from the third century BC. in conflict with Rome, among other things because of its strategic location. Of course of vital importance for a colonizing people like the Romans. This conflict resulted in the three Punic wars between Carthage and the Romans. Legendary is General Hannibal who threatened the Romans on their own territory and with a huge army of elephants through France and across the Alps to Rome. Ultimately, however, the Carthaginians were defeated and the city of Carthage was completely destroyed. After its demise it belonged to the Roman province of Africa, where many Roman settlers settled. Curiously, it was not until 1985, more than 2000 years later, that peace was made between Rome and Carthage. Christianity spread from the Middle East in the 2nd and 3rd century AD. about the Roman Empire. In the 5th and 6th centuries Carthage belonged to the realm of the Vandals. These Germanic tribes led by the famous Geiserik invaded North Africa from Spain. From North Africa they undertook raids to countries and islands around the Mediterranean. The Vandals were again expelled by the Byzantines in 543, after which Carthage entered a new period of prosperity.

After the death of Mohammed in 632, the Arabs conquered North Africa in a relatively short time. It was not until 698 that the Byzantines were expelled and Tunisia was conquered by the Arabs. A very drastic event because the population switched to Islam from the seventh century and took over the Arabic language and culture in the centuries that followed. In 800 Ibrahim ibn al-Achlab was appointed governor and founded the first indigenous Tunisian dynasty, that of the Aghlabids, which ruled Tunisia for over a century. In 909 the Fatimid dynasty followed. 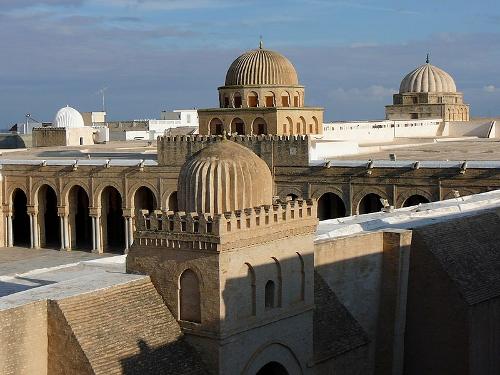 Great Mosque of Kairouan from the Arab period, TunisiaPhoto: Agnes Komjathy CC 2.0 Generic no changes made

They eventually wanted to conquer Morocco and Egypt as well as Tunisia. Egypt was indeed conquered in 969 and a Berber governor was appointed for Tunisia, who in turn became independent and founder of the Zirid dynasty. Around 1050 it came to an open break with Egypt and the ensuing struggle led to anarchy. Roger II of Sicily took advantage of this to occupy the coastal strip in 1148. In 1159, the Almohads of Morocco conquered Tunisia and made Tunis its capital. Abd al-Wahid became the governor in 1207, who broke away from Morocco in 1228 and founded the Hafsid dynasty. Under the Hafsids, Tunisia underwent three centuries of prosperity and cultural prosperity.

Although under constant threat from other Mediterranean powers, Tunisia remained independent as a result of conflict between those states. In 1534, Tunis was occupied by the pirate Barbarossa, after recognizing Turkish sovereignty. However, this was short-lived and in 1535 Charles V restored the Hafsids under Spanish rule. The Ottomans recaptured Tunisia in 1574, partly because the Spaniards were already at war with the Netherlands. Tunisia became virtually independent under Turkish supremacy. The country officially became an Ottoman province, headed by a pasha appointed by the sultan. One of the officers of the beis took over power in 1591. This was followed by a reign of regents, the deis, and the balance of power shifted again. The bei, whose job was to collect and administer taxes, became the real ruler in the state. Ibrahim al-Sharif finally took the titles bei, dei and pasha in 1702. However, as early as 1705 he was succeeded by Hussein ben Ali Turki. Hussein became the founder of the Hussein dynasty. Tunisia became more prosperous under the Husseinians. Besides the age-old piracy, agriculture and trade also generated a lot of money.

At the beginning of the 19th century, European countries demanded the suppression of piracy and the abolition of slavery. This naturally cost Tunisia a lot of money and great poverty was the result. The conquest of Algiers by France (1830) had major consequences for Tunisia. Attempts to modernize Tunisia failed and cost a great deal of money. Increasing taxes was often the cause of popular uprisings. Mohammed al-Sadik gave Tunisia a constitution pre-approved by Napoleon III in 1861. 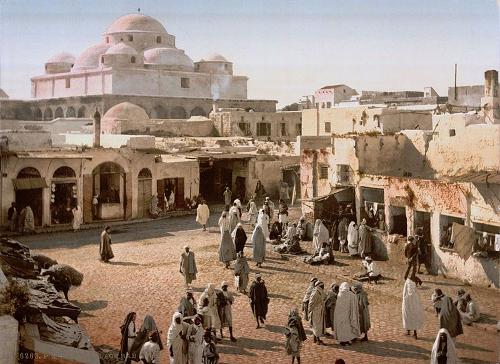 In April 1881, French troops from Algeria invaded Tunisia following a border incident between the two countries. They forced Mohammed al-Sadik to accept the Treaty of Kasser Sa'id, which stipulated that he would theoretically remain ruler of Tunisia. In 1883, Ali IV was forced to sign the Treaty of Mersa, officially declaring Tunisia a French protectorate. Encouraged by large-scale donations of land, many French settlers moved to the country. In 1920 the Destour movement was founded with the aim of establishing a constitutional regime with self-government for the Tunisians. Disagreements between the Destour and the French led to riots and demonstrations, after which the Destour was banned in 1925. In the early 1930s, the Destour re-emerged, but it was soon divided into a moderate and a radical group.

The radical group split off in 1934 under the leadership of Habib Bourguiba and formed a new party, the New Destour party. His supporters called for extensive political resistance to French rule. Bourguiba is arrested and exiled to the south of Tunisia. He was released in 1936 and immediately organized strikes and mass demonstrations. In 1938 clashes between the Tunisian nationalists and the French reached a peak, martial law was declared and the leaders of the Neo-Destour were arrested and deported to France. During the Second World War, Tunisia was temporarily under the rule of Vichy. The Germans were chased by the British towards Tunisia in 1942 and on May 7, 1943, the victory over the Germans could be celebrated. In 1949 Bourguiba returned and in April 1950 the Néo-Destour made new proposals to the French. At the heart of this was that the handover of sovereignty and executive power should be given to the Tunisians. Political reform soon came to a halt, and major demonstrations and strikes were held in 1952. Bourguiba and several other leaders of the Néo-Destour were imprisoned again, while the French appointed a military administration later in the year. In July 1954, the French made new proposals to establish internal self-government for Tunisia. On June 2, 1955, a final agreement was reached, which regulated internal autonomy for Tunisia. Néo-Destour members stuck to the ultimate goal, a completely independent Tunisia. A smaller group led by Salah ben Youssef was vehemently against this and tried to prevent its implementation, including by acts of terrorism against both the French and the members of the Néo-Destour who were in favor of the agreement. In 1955, Salah ben Youssef and his supporters were expelled from the party and Bourguiba re-elected chairman of the party.

On March 20, 1956, Tunisia's independence was recognized by France. In the months that followed, elections were held, the monarchy abolished and Bourguiba was elected president of the Tunisian republic. However, French troops were still in the country. After a French bombardment of a Tunisian-Algerian border village in February 1958, Tunisia severed relations with France and demanded the complete withdrawal of the French troops. In 1961, Bourguiba again demanded complete withdrawal and claimed an Algerian part of the Sahara. As a result of fighting around these areas, Tunisia reached out to other Arab states and the Eastern bloc.

After the war in Algeria, negotiations in 1963 resulted in the withdrawal of all French troops and the return of territory from French colonists. Further nationalization of the lands of French colonists resulted in France ceasing its aid. Through far-reaching land reforms and socialist experiments, Bourguiba tightened its grip on the party and the country. In 1975 he was elected president for life. He wanted to end the Arab-Israeli conflict through dialogue, but that led to the removal of the Arab states. Tunisia's participation in the Yom Kippur War in 1973 with a small army brought some improvement in these relations. In the second half of the 1970s, students and the union opposed government policy.

In 1977 army units fired on strikers and protesters and while the strikers' demands were met in a number of cases, Prime Minister Nouira continued to advocate a crackdown. Ministers were fired and the top of the union was thrown in jail. In the parliamentary elections of November 1981, more parties were admitted for the first time, but none reached the 5% electoral threshold. In the 1980s an Islamic fundamentalist movement emerged. The government took tough action against this. The Muslim fundamentalists were involved, among other things, in disturbances at universities and in the great bread riot of January 1984. President Bourguiba then fired Prime Minister Mzali. On November 7, General Ben Ali, appointed Prime Minister in October 1987, had the elderly Bourguiba declared unfit to hold the presidency any longer and took power himself. In foreign policy, Tunisia focused more on the Arab world. For example, the PLO established its headquarters in Tunis in 1982.

During the Second Gulf War, Tunisia took a neutral stance. In the presidential elections in March 1994, President Ben Ali was re-elected by a large majority and in the parliamentary elections the Rassemblement constitutionnel démocratique (RCD) won almost all votes. The state of affairs with regard to the elections and human rights was widely criticized from home and abroad. President Ben Ali took a very hard line against Islamic fundamentalism, which resulted in the arrest of many fundamentalists. In January 1996, Arab Foreign Ministers met in Tunis to discuss a joint strategy against terrorism.

In the presidential election in October 2004, Ben Ali received 99.4% of the vote. A constitutional amendment paved the way for Ben Ali's fourth term in office. In recent years, 2005-2008, there has been turmoil between the government and the Islamists. In January 2007 there is a battle between Islamist militants and security forces. In February 2009, a French court condemned Islamists for bombing the Djerba Island synagogue. President Ben Ali wins his fifth term as president in October 2009. On January 14, 2011, President Ben Ali flees to Saudi Arabia after days of unrest and brutal police crackdown. Prime Minister Mohammed Ghannouchi has been appointed interim president. On December 12, 2011, Moncef Marzouki was elected interim president of the Tunisian Republic. In October 2013, the ruling Islamist Ennahda Party agreed to a national unity government to prepare for the 2014 elections. On January 29, 2014, Mehdi Jooma will become head of the interim government. In May 2014, parliament passed the new electoral law to pave the way for presidential elections at the end of 2014. Beji Caid Essebsi was elected president in December 2014. In 2015 there were attacks by Islamic State against mainly tourist targets, such as the Bardo museum in Tunis and the coast at Sousse. October 2015, four Tunisian organizations receive the Nobel Peace Prize for their contribution to the transition to democracy. 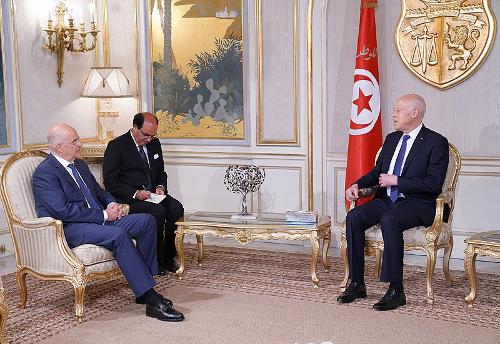 In April 2017, a diplomatic row with Morocco and Algeria arose over a group of Syrian refugees. In the second half of 2017 there are many protests and in December 2017 Mehdi Johma becomes prime minister in consultation with the opposition. Kais Saied has been president with an anti-corruption agenda since October 2019. In September 2020, Hichem Mechichi will become prime minister of a technocratic cabinet that aims to get public finances in order. On 25 July 2021, Saied seized exceptional powers allowed under Tunisia's constitution to fire the prime minister and suspend the legislature.