The Egyptian economy is characterized by the abandonment of Arab socialism under Nasser (a state-run economy system) and a gradual transition to a freer economy under Sadat and Mubarak. Nationalizations were reversed and foreign investment encouraged. Under pressure from the IMF, which provided various loans in the 1990s, the privatization of the economy was accelerated, partly due to new investment legislation. Since the start of the privatization process in 1994, 132 companies have been fully privatized and 57 companies have been partially privatized at the end of June 2002. Another 125 companies should have been privatized by the end of 2002, but this failed. But the economic situation did not improve. Due to strong population growth, the shortage of jobs has become increasingly acute. Tourism has always been a strong pillar of the economy, but since the 2011 turmoil, the number of tourists has fallen dramatically. 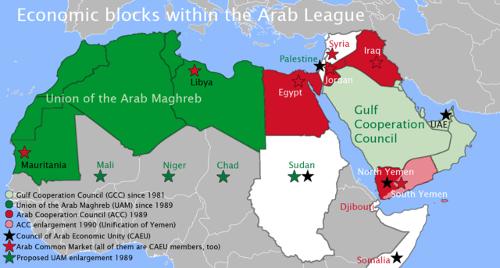 Economic blocks in the Arabian LeaguePhoto: User:Roxanna CC 3.0 Unported no changes made

In 2017, 11.9% of the labor force was officially unemployed and around 2 million Egyptians were working abroad, mainly in Saudi Arabia (924,000), Libya (333,000), Jordan (227,000) and Kuwait (191,000). Unemployment among the highly educated is very high, approximately 45%. Many highly educated people and also low educated people, look for work abroad. For example, a certain "brain drain" has started to other countries. Yet all those Egyptians abroad are of tremendous importance to the Egyptian economy. They send billions of euros to their homeland every year, an important source of income.

Although about 25.8% of the labor force is employed in agriculture, the yield of that sector is relatively low, 11.8% of GDP. The Egyptian economy is currently dominated by the services sector, with a share of about 49% of total GDP. (2013) Mining and industry are also an important source of income for Egypt.

Agriculture is still an important sector for the economy, both in terms of employment and its share of Egyptian exports.

In 1962, peasants' land holdings or 'fellahs' (Arabic for' tenders of the land ') was basically limited to 100 feddans (1 feddan = 0.42 ha), but in 1981 95% of all farms had no more than 5 feddan; the average is only 0.9 feddan. By improving irrigation and drainage techniques and the climate, the available cultivated land has been expanded to approximately 6 million feddans (= more than 36,000 km2), about 4% of the entire country, which yields two, sometimes three harvests per year. The production yield per feddan has also increased, but due to the rapid population growth, this has not led to a reduction in food imports.

The expansion of the cultivated land is also insufficient. Since the High Dam near Aswan was completed in 1970, the agricultural area could be increased by approximately 5000 km2, but a lot of cultivated land was also lost again due to urban development and salinization. 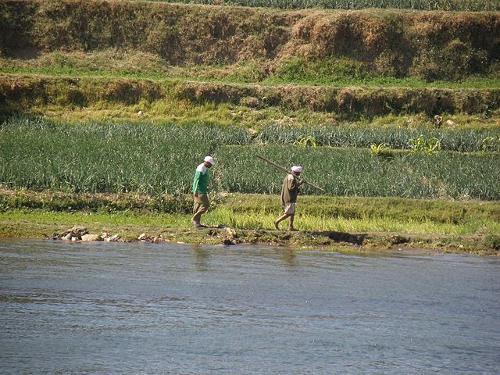 Egypt is the world's leading supplier of long-fiber cotton and the sixth largest cotton producer in the world. The high-quality Egyptian cotton is partly exported, while Egypt imports lesser qualities of cotton for its own needs from Syria, Turkey and the United States.

Rice cultivation is becoming increasingly important. Egypt has the largest rice production in Africa and ranks second in the cultivation of corn and cane sugar. Cereals, vegetables, (citrus) fruits and potatoes are also grown.

Egypt produces several dozen types of fruit and vegetables and the horticultural sector has been growing strongly since 1987. The number of greenhouses is more than 20,000 with a production of about 80,000 tons. The most cultivated greenhouse products are cucumbers, tomatoes and peppers. 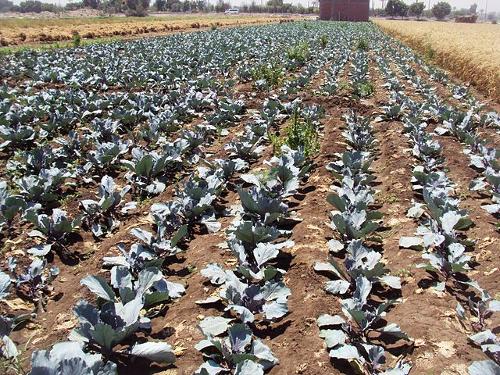 Field of brassica, EgyptPhoto: Unknwn CC 3.0 Unported no changes made

Livestock farming provides a quarter of the agricultural contribution to the gross national product. The most common types of large cattle (mainly used for milk and meat production, but also as pack and draft animals) are cattle, buffalo, sheep and to a lesser extent donkeys and goats. Still, a lot of dairy products and meat have to be imported. A lot of young cattle in particular are imported. Total milk production in 2000 was estimated at 2.8 million tons, insufficient to meet domestic demand. Camels are also kept.

Due to the construction of the Aswan Dam, most of the fishing in the Mediterranean (sardines, shrimps) has been lost. Inland fishing (including in Lake Nasser, behind the dam) provides 80% of the total catch.

The petroleum industry is of great importance to the economy. The principal fields are in the Gulf of Suez, in the Sinai and in the areas of the more recent finds: the fields of El Alamein, Yidma, Abu Gharadek and al-Razzak in the Western Desert. In 1968 Egypt became an oil exporting country.

Oil refinery centers are Alexandria and Cairo. There is a network of pipelines to transport the oil. The pipeline with the largest capacity is that from Suez to the Mediterranean.

In 1974 natural gas fields were discovered at Abu Madi in the Nile Delta. Other fields are located at Abu Gharadek in the Western Desert (1976) and in Abukir, near Alexandria (1977). Gas reserves were estimated at 935 billion m3 in 1997. The natural gas is used exclusively for domestic consumption; export is only considered when the country itself has enough for at least 40 years.

Logo of the Egyptian oilcompany MisrPhoto: Marc Ryckaert CC 4.0 International no changes made

Other important minerals are phosphate, iron, salt and manganese, which are largely unexplored. Coal is found in the Sinai Desert and iron ore in the Bahariya Oasis and Aswan. For agriculture, the phosphate mines in the Arabian and Libyan deserts are important, providing the raw material for the fertilizer to keep the soil fertile now that the silt from the Nile remains in Lake Nasser. There is also some gold in the Arabian Desert, the Sinai provides marble and Aswan a famous red granite. Chromium and manganese are also found in the Arabian Desert.

South of Cairo, near Heluan, is the largest steel mill in Africa and at Naj'Hammâdî the largest aluminum smelter. Egypt is heavily dependent on the Aswan Dam for energy supply.

GENERAL
Industrial production increased by approximately 20% between 1950 and 1970 and since then by approximately 5% annually. There is a surplus of cheap labor, but a shortage of technically skilled workers. Most companies are known for inefficiency, understaffing and shortage of capital. Since 1977, Egypt has pursued a policy of attracting more foreign capital and privatizing many state-owned companies. 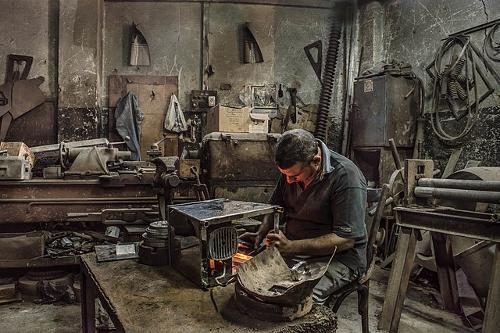 Most industries are located in and around the major cities of the Nile Delta (Cairo, Port Said Free Trade Zone, Alexandria); the main industrial sectors are the textile industry and the food industry (approx. 57% of industrial production). Heavy industry is increasingly important, such as the iron and steel industry in Helwan and the aluminum industry in Nag Hammadi. Other small industries include cement, automotive and electronics industries. Since 1980 there has been a strong development of the arms industry.

CLOTHING AND TEXTILE
The textile industry is one of the most important industries in Egypt. More than 1 million people work in this sector. The main textile centers are Mahallah al-Kubra and Kafr al-Dawar.

Outdated technologies and machines will force many companies to close their doors. These machines can only process expensive imported cotton. Modernization of the machine park therefore has the highest priority.

Many products are sold on markets in EgyptPhoto: Marwa elchazly CC 4.0 International no change made

PHARMACEUTICAL INDUSTRY
The Egyptian pharmaceutical industry in a real growth sector, more than 10% annually. Egypt is the largest producer of pharmaceuticals in the Middle East and North Africa with a share of 30%. A small part of the total production is exported, mainly to neighboring countries.

IT
The information technology market is booming. As of mid-2001, Egypt had about 60 internet service providers and more than 800,000 internet users. Free Internet became available in January 2002. The number of mobile phones is growing rapidly. This number is expected to double within a few years. The production of self-made hardware is still very limited; 60% of computer systems are composed of imported components.Electronic business is still in its infancy due to the low number of internet connections and the very limited use by the population of credit cards.

Egypt's trade balance has been in deficit for many years and probably always will. In 2017, total exports of US $ 23.5 billion and imports of US $ 53 billion, so the trade deficit is large. 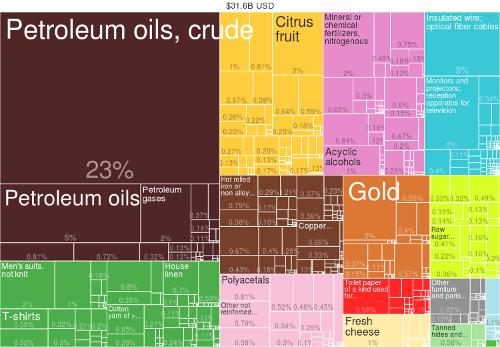 The main exports are cotton and oil and oil products, textiles and rice. The main export areas are the former Soviet Union, the EU countries (especially Italy, Greece) and the United States.

Many consumer goods have to be imported (especially wheat). Furthermore, machines, chemicals, means of transport and metal are imported. Most imports came from the EU countries (especially Germany, Italy and France) and the United States and Japan.

Trade with Arab countries is still limited, 4.9% of total imports and 8% of total exports. The main Arab markets are Libya, Saudi Arabia, Jordan and the United Arab Emirates. In order to intensify trade relations with the Arabs, Egypt is striving for an Arab free trade zone.

Good roads connect Cairo and Alexandria, the cities along the Suez Canal and those in Upper Egypt. The Egyptian road network was greatly expanded in the 1980s and covers a total of more than 45,000 km. On November 14, 1980, the Ahmed Hamdi tunnel under the Suez Canal was opened. The coastal road to Libya and the connection with Sudan were improved. 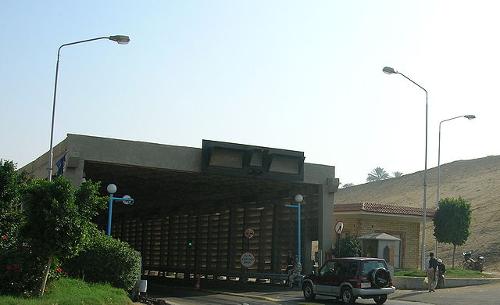 As early as 1851, Egypt had a railway network. In 1990 the total length was 7,726 km. The Egyptian railways transport approximately 800 million passengers and 12 million tons of freight per year. In 1987 the metro network in Cairo was put into operation. The European Investment Bank is financing the extension of the South Metro Line 2 in Cairo.

After the train disaster of early 2002, the Egyptian government set aside 250 million euros for the modernization of the railways, including for the purchase of new wagons and locomotives.

The national airline of Egypt is EgyptAir, fully owned by the Egyptian government, based in Cairo and the hub at Cairo International Airport. In addition to regional destinations, EgypAir flies to more than 50 destinations in Africa, Australia, Europe, Middle East, Far East and the United States. 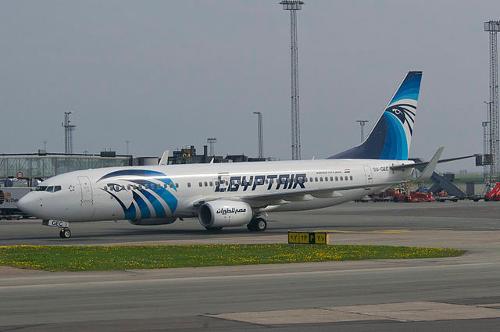 The main ports are Alexandria, Port Said and Suez. A new large port complex was completed in 1986 at Damietta. In 1985 a ferry service started operating between Nuweibeh on the Red Sea and the Jordanian port of Aqaba. The waterways are important as a means of transport. The total length is 3350 km, of which almost half is formed by the Nile; the rest consists of channels.

The government wants to expand the ports on the Mediterranean and the Red Sea. To the west of Alexandria, a new port is being built: Dakheila, with a capacity of 20 million tons of cargo handling per year.

As far as inland navigation is concerned, making the Nile more navigable is the most important task of the government.

The Suez Canal is one of the largest sources of foreign exchange after the income of Egyptians working abroad. 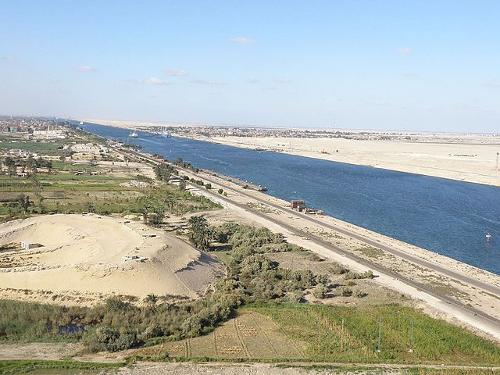 Suez, great source of income for EgyptPhoto: Mmelouk CC 4.0 International no changes made