Other small populations include the Berber nomads in the remote oasis of Siwa, the Nubians (in the south) and the Copts (in Upper Egypt).

Siwa is the most remote oasis and is an un-Egyptian world, whose inhabitants do not speak Arabic, but a Berber dialect, Siwi.

The Nubians are an important population group (approx. 6 million), which can also be found further upstream in Sudan (Dongola). Most Nubians live in villages along the banks of the Nile between Aswan and Luxor, notably in Kawm Umbu. Due to the construction of the dam at Aswan, they lost their original habitat in 1970 when it was flooded. Half of the Egyptian Nubians left for Sudan.

There are also several tens of thousands of Bedouins (estimates vary between 50,000 and 70,000), who partly still adhere to their (semi-) nomadic lifestyle. Most of them live in the Sinai and originate from the Arabian Peninsula. The Aulad Ali, Bedouins from Libya, live along the Mediterranean coast. However, they have traded their tents for stone houses and often work in Cairo and Alexandria. 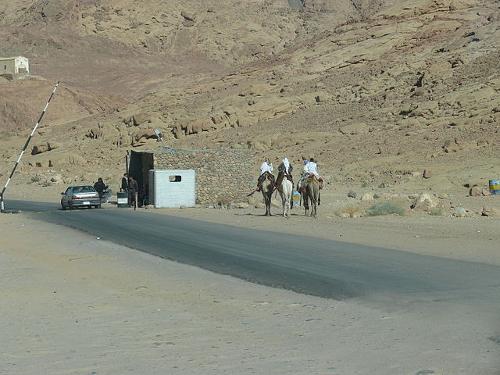 Egyptian bedouins in the SinaïPhoto: Someone10x CC 2.0 Generic no changes made

There is a rapid population growth (2.45% in 2017) which is a direct consequence of a high birth rate (29.6 per 1000 inhabitants in 2017) and a decreasing death rate (4.6 per 1000 inhabitants in 2017). The government promotes birth control, yet about 1 million people are added every nine months. In a century, Egypt's population has grown nearly tenfold. By building cities in the desert and developing the Suez Canal Zone, the government is trying to alleviate the population pressure in the Nile Valley. Major construction projects have also been started in the western oases. Several million Egyptians work as 'guest workers' in other Arab countries.