93% of the Egyptian population practice Sunni Islam, the official state religion. However, the free exercise of Christianity and Judaism is guaranteed in the constitution.

This does not mean that Egypt is an Islamic state with pure Islamic law. Muslim fundamentalists do strive for this, and as a result often come into conflict with the government. One of the most important founders of contemporary fundamentalism is the Egyptian Sayyid Qutb, born in 1906 in the province of Asyut. He preaches armed struggle, "jihad," His book on it, "Ma'lim fi'l-Tarikh," became the political bible of the fundamentalists. From the 1980s onwards, various fundamentalist groups carried out attacks, including the assassination of President Sadat in 1981. The violence intensified in the early 1990s and since the summer of 1992, attacks on foreign tourists have also been carried out. 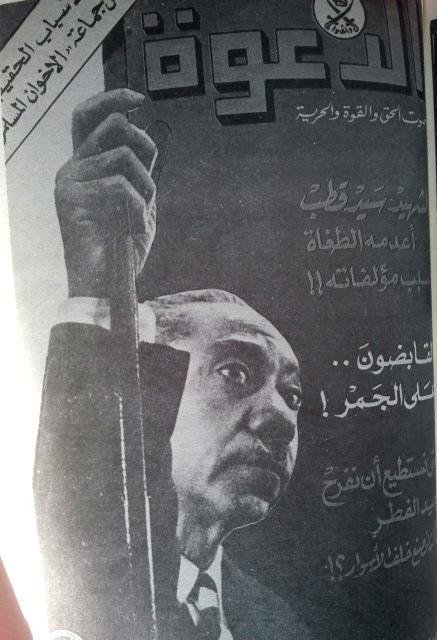 Sayyid Outb, one of the founders of Egyptian fundalismPhoto: Olivier Carré et Gérard Michaud CC 4.0 International no changes made

Central to Islam is the belief in the one God, who through revelations to a series of prophets made his will known to man. Muslims believe that a merchant from Mecca, Muhammad, received God's closing revelation, and is therefore considered the Seal of the Prophets. That closing revelation is recorded in the Quran, which was completed twenty years after Muhammad's death. Muhammad himself did not appoint a successor and after his death the fledgling Islamic community was soon torn apart by succession disputes.

A battle arose between Muslims who wanted to test the Quran against human reason and those who held to the literal nature of the revealed text. The traditionalists fiercely oppose rationalists, the modern thinking intellectuals. The traditionalists adhere to the literal nature of the revealed Qur'anic text, to the sayings, "hadith", of the prophet, and to his actions, the "sunnah". These three form the basis of the Islamic law of duty, the "Sharia". 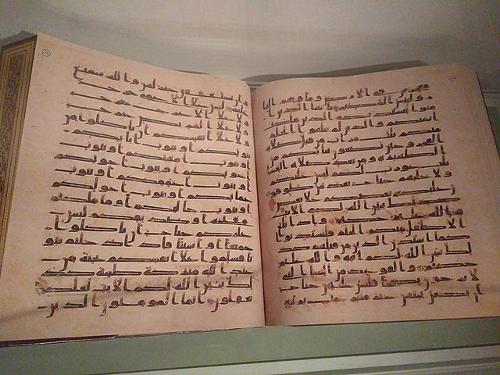 According to the Sunnis, every good Muslim is eligible to succeed Muhammad, and must be designated by the people. In practice, this is done by a counsel of the scribe called "ulama".

Shias recognize as the leader of the Islamites only the descendants of Ali, murdered in 661, who was married to Muhammad's daughter Fatima. They alone possess esoteric knowledge which, from Muhammad, is passed on through a hereditary line of imams who are considered infallible. Shias make up about ten percent of the Muslims. The main Shia country is Iran.

The largest religious minority are the Copts (6%). The Copts mainly live in Cairo, Central Egypt (al-Minya, Asyut Sawhag) and Alexandia.

The head of the Coptic Orthodox Church is the Patriarch (Pope) of Alexandria. This patriarch is regarded as the successor of the apostle Mark, who according to tradition brought Christianity to Egypt in the 1st century. By the 4th century, Christianity was the official religion of Egypt.

The Egyptian Christians split from the Orthodox Church after the Council of Chalcedon in 451 determined that Christ had a human and divine nature. Dioscorus, patriarch of Alexandria, did not accept this definition: he believed only in the divinity of Christ (monophytes). The Monastery of St. Anthony, built in the Red Sea Mountains in 361-363, is the oldest Coptic monastery in Egypt. The current Coptic Pope Shenouda III rose to power under President Sadat. He has transformed the Coptic Church into a vibrant community from a dusty church. He is also very militant when it comes to the interests and rights of the Copts. That got so out of hand that in 1981 he was suspended as pope by Sadat and locked up in a monastery. All kinds of Muslim movements and especially fundamentalists are agitating against the Copts, and killings, fires and molestation are very common.

In addition to the Copts, there are about a quarter of a million other Christian minority groups, including Greek Orthodox, Roman Catholics, Armenian Orthodox and Protestants.

Especially in the south, where people have mixed much less with the Arabs, the old, pre-Islamic Egyptian faith has not completely disappeared. The people there are often very superstitious.

In the big cities there are small Jewish communities, mainly made up of elderly Jews. As a result, Judaism as a religion is doomed to disappear from Egyptian society. With the founding of the State of Israel in 1948, most of the Jews left Egypt.

The Ben Ezra Synagogue in Old Cairo, the oldest monument to the Jews in Egypt, is still being preserved. The synagogue was extensively renovated in the 1980s. However, it is no longer used for services. 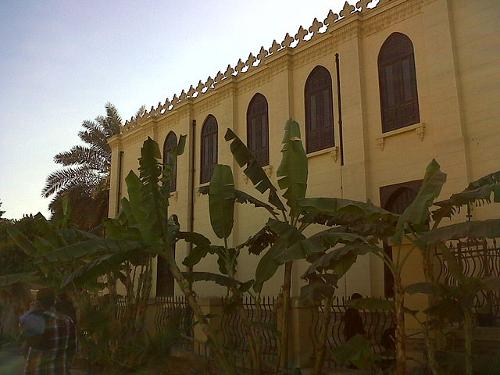 In general, the gods of the ancient Egyptians had several appearances, according to their different characteristics. Most gods were worshiped in a certain place or region, some managed to become the kingdom god.

Many gods were depicted in animal guises. In fact, it was not actually the animal itself that was worshiped, but rather the force with which it was associated. In the Late Age animal worship changed in character and the animals associated with the gods were themselves considered sacred.

AMON
God of the wind and the "breath of life". Later became tutelary deity of Thebes and was during the New Kingdom as Amon-Ra kingdom god of Egypt. Has always been depicted as a human figure, with a crown with two long feathers. 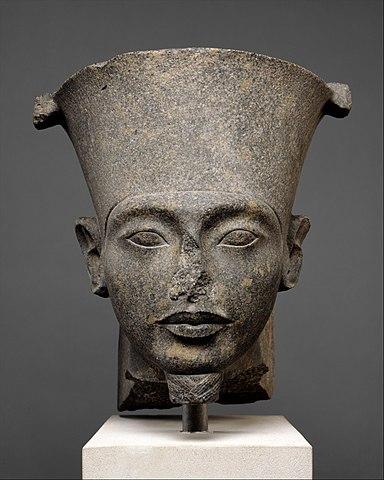 ANUBIS
God of mummification and protector / guide of the dead in the underworld. He was always presented as a black reclining jackal or dog. Also known as a jackal or dog head.

APIS
The "Sacred Bull of Memphis" was a symbol of strength and virility. He was depicted as a predominantly black bull with a white triangular spot on the forehead and a sun disk with cobra erected between the horns.

HATHOR
Sky goddess, goddess of music, dance, joy and love and protector of women. Was depicted as a cow or as a woman with a cow's head or ears, with the sun disk between the horns.

ISIS
Symbol of devoted motherhood. Was portrayed as a woman with a throne on her head, or with cow horns, a sun disk and a throne. 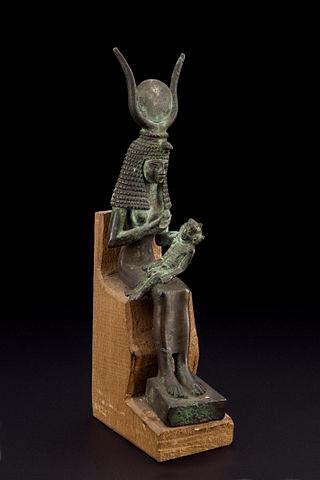 OSIRIS
Fertility god, later commonly associated with the fertility of the soil and the Nile and the growth of crops. Later also became ruler of the realm of the dead. Depicted in mummy coats, with green skin, a feather-trimmed crown, and signs of royal and divine power: scepter, crook and flail.

RA
Sun god who manifests as the solar disk. Ra was represented as a man with the head of a falcon, surmounted by a sun disk, surrounded by the "uraeus" or upright cobra.

SETH
Was the symbol of destructive forces, especially the desert, the thunderstorm and the dry wind. Depicted as a human with the head of a terrifying fantasy animal and a double crown.

THOTH
God of measures, arithmetic, science and knowledge. He was depicted as an ibis or baboon, or as a man with an ibis head, writing utensils in hand. 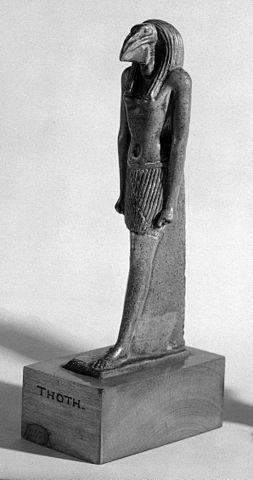