The official language in Egypt is Egyptian Arabic, which is spoken by about 98% of the population. Egyptian Arabic is actually a dialect of Modern Standard Arabic. Egyptian Arabic is the most important of all Arabic dialects, not only because of the large number of Egyptians, but also because the country is the leading producer of film, radio and television programs in the Arab world. The transcription from the Arabic script to the Roman alphabet is not easy, and different spellings for the same word can be encountered.
The Arabic script consists of 28 letters and is written from right to left; Arabic numerals, on the other hand, are written from left to right. In addition to this language, Nubian, Coptic and Berber (in Siwa) still exist.

The Coptic language has its origins in Greek and Egyptian hieroglyphs. The Coptic language is still used in religious ceremonies. The name Coptic only originated after the Arab conquest. The Greeks called the land Aiguptos and the inhabitants Aigupti. This was corrupted by the Arabs to Gupti, from which Copts is derived. So Coptic literally means as much as "native Egyptian". 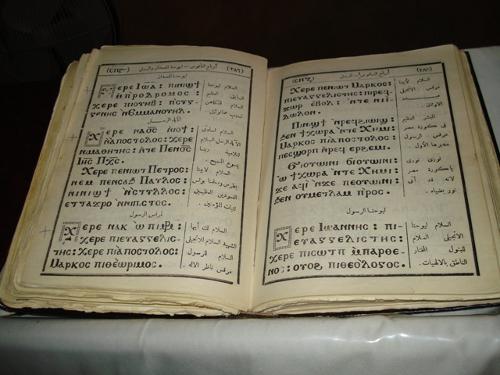 Bible in the Coptic languagePhoto: Lollylolly78~commonswiki CC 3.0 Unported no changes made

The Nubian language has nothing to do with Arabic. Ethnologically, it is spoken Nubian to be divided into Fiadidja-Mahas and Kenuzi-Dongola.

Fiadidje-Mahas is spoken in Sudan, although more than 50% of Nubians in Egypt are Fiadidja. In Egypt this language is spoken by all Nubians living south of Kunuz. Fadidja and Mahas are two variants that hardly differ from each other.

Kenuzi-Dongola is spoken by the Nubians of Dongola in Sudan and Kunuz in Egypt. Most of the people from Dongola and Kunuz understand those who speak Fadidja-Mahas.

English and French are also spoken by educated Egyptians.

Below are some Arabic words and expressions in a simple phonetic transcription:

Where is the toilet = wien at-towaaliet

Three types of writing were in use in ancient Egypt. An originally secret language for the priests, the hieratic script, the demotic script, intended for daily use by the people, and the hieroglyphic script.

Hieroglyphs date back to c. 3200 BC. and are the oldest known script in the world. The word "hieroglyph" means "sacred engraved letter" and refers to the pictorial script used by the ancient Egyptians to express their faith. The Egyptians themselves also called the hieroglyphs the gods words. Hieroglyphic writing was originally purely "pictorial", and the signs initially meant exactly what they represented. Gradually the pictograms took on a general meaning and concepts and ideas were also displayed.

Hieroglyphs were mainly carved on monuments and can be read from left to right, right to left or from top to bottom. Because it was a very complex writing system, characters that were easier to write were developed over the centuries. The last datable inscription is that on Hadrian's Gate at Philae from 394. 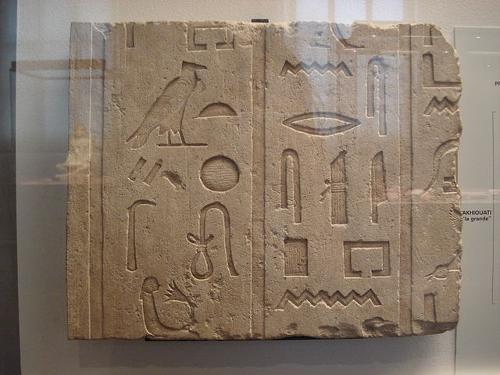 It took years of practice to master the art of hieroglyphics. The specially trained writers belonged to the social elite.

There are three main types of hieroglyphs. "Phonograms" convey the sounds of syllables, "ideograms" depict the object or action itself, it "determinatively" confirms, changes or indicates the meaning of the adjacent word. A complicating factor is that many symbols can represent all these types. Reading is further complicated by the fact that words and sentences are neither separated by distances nor by punctuation marks. One aid is that symbols of animals and people always look at the point where the text begins.

The person who first succeeded in deciphering hieroglyphs was the French linguist Jean-François Champollion, in 1822. The key to reading hieroglyphs was found on a black granite stela, the 'Rosetta stone', discovered by the Napoleon's soldiers in 1799. 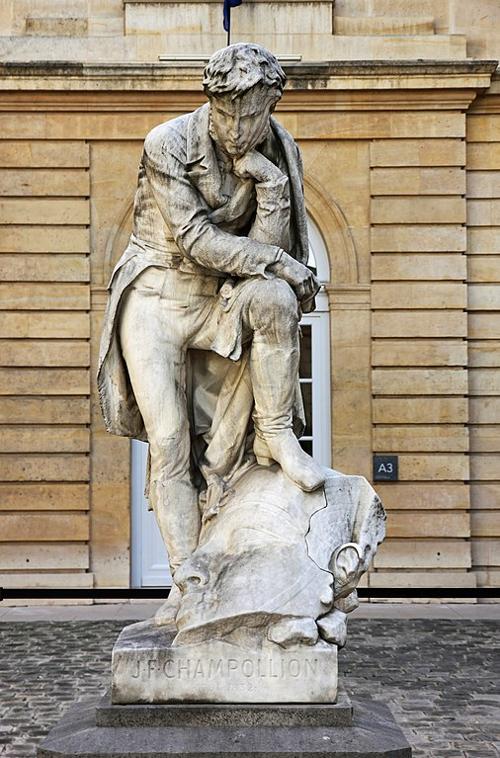 It had a text in three scriptures: hieroglyphs (14 lines), Demotic (32 lines) and Greek (54 lines). By deciphering the three texts and comparing them, he managed to decipher the hieroglyphs. The text is a decree from 196 BC, written by priests who were together in Memphis at the time. They expressed their gratitude to Pharaoh Ptolemy for taking good care of the faith and the temples.

The Egyptians mainly used the "papyrus" as writing material, made from the papyrus plant, the Cyperus papyrus. The stem of the plant was divided into strips, which were pressed together in two layers, transverse to each other. The sheets of "paper" were then assembled into rolls. The plant, the sheets, the scrolls and the texts and images applied to them became known as "papyrus". Papyrus remained in use as a writing material until the 10th century. The text was applied with a writing reed dipped in ink. Often the hieroglyphs were provided with a color.