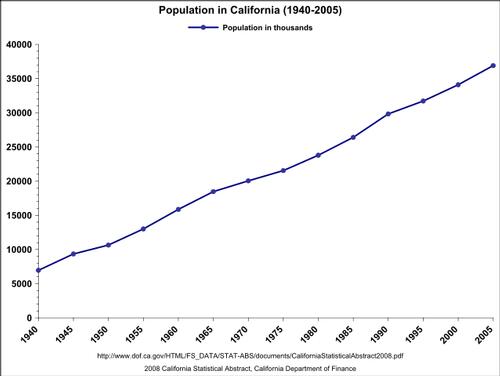 California population growth in the period 1940-2005Photo: Urban in the public domain

One third of the inhabitants were born abroad or have their roots there; California is therefore the most ethnically diversified US state. Approx. 74% of California's population is white; some 6.6% are black, which is below the national average of almost 13%. Currently, one in four legal immigrants is settling in California. In addition, an estimated 3 million illegal immigrants are currently living in California.

Almost 14% of the population is of Asian descent, more than three times the national average. The first Chinese arrived during the gold rush, which started in 1848. Around 1860 a massive immigration of Chinese started again, this time because of the great economic problems in their homeland. However, the Chinese faced a lot of racial violence, which resulted in the creation of entire Chinese neighborhoods in cities such as San Francisco and Los Angeles. In 1880, the Chinese were even largely banned from the United States, a situation that lasted until 1943. At the moment, the Chinese neighborhoods have become a real tourist attraction. 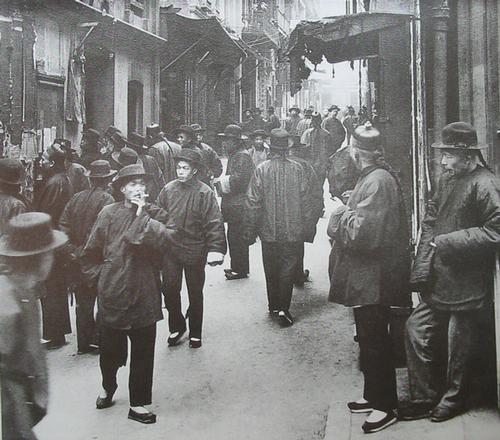 In the early 20th century, many Japanese farmers came to California and did good work there. However, that changed completely after the attack on Pearl Harbor in 1942; the Japanese were considered a threat to internal security and were interned during the war. WRA (War Relocation Authority) Location Centers were located in, from north to south, Tule Lake, Manzanar, Poston and Gila River; Cow Creek had a WRA Temporary Camp.

In addition to Chinese and Japanese, many Cambodians, Vietnamese, South Koreans and Laotians also live in California. Long Beach has the largest population of Cambodians outside of Cambodia ('Little Phnom Penh'), Fresno has the largest Hmong community in the world outside of Laos. The Vietnamese and South Koreans moved to the United States because of the wars fought there in the second half of the 20th century. Silicon Valley has attracted many technically trained Indians and Pakistanis since the 1970s.

Santa Monica also has a large community of Englishmen, Solvang has its Danes, Kingsburg its Swedes, Bakersfield has the largest Basque community in the United States, North Beach in San Francisco is 'Little Italy', and the second largest Jewish community in the United States also resides in California, especially in Los Angeles. Many of today's cities were founded by Spanish explorers as early as the 17th and 18th centuries. As early as the mid-20th century, California had the largest population of Mexicans in the world outside of Mexico in its territory. Many Hispanics from Central and South America came to California in the 1980s because of serious economic and political problems in their country.

More Native Californians live in California than in any other US state. A small number of them still live in reserves, most of the indigenous peoples are integrated. Tribal tribes with a large territory at the time of the arrival of the Europeans were Achumawi, Cahuilla, Chemehuevi, Kawaiisu, Mono. Nisenan, Panamint, Serrano and Yokuts. 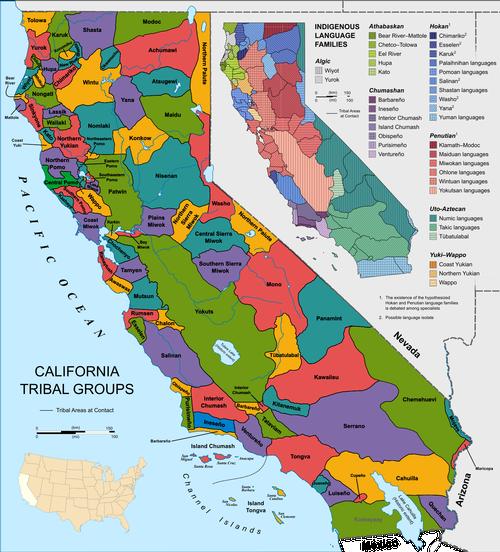 Native peoples of California at the time of the arrival of the EuropeansPhoto:Concerto CC 3.0 Unported no changes made

California consists of 58 counties, of which the largest in area is San Bernardino County, the one with the most inhabitants is Los Angeles County, approx. 10 million. The population of each county varies enormously, Alpine County in eastern California has a population of just over 1,100.