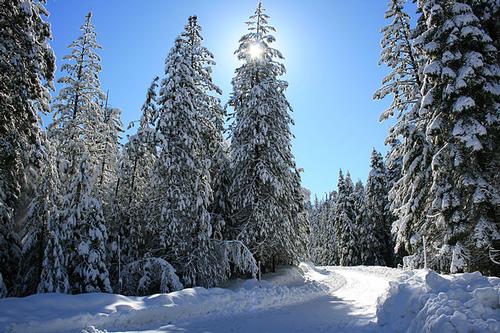 California's climate varies greatly, from desert to sub-arctic, depending on latitude, elevation changes, and proximity to the coast. The coastal regions, the Sierra Nevada promontory and the Central Valley have a Mediterranean climate, with warm, dry summers and mild winters, both in temperature and in terms of precipitation.

The influence of the ocean moderates the climate on the coast, making the winters a bit warmer and the summers a lot cooler. Then it could just be that it is 38°C inland and the thermometer on the coast only shows 21°C.

Further inland the climate becomes somewhat more continental and in some areas even a semi-arid or steppe climate with cold winters and hot summers. Here the weather conditions are more like those of the desert regions of Arizona and Northern Mexico.

In the extreme southwest, around San Diego, it has a subtropical semi-arid or steppe climate with very dry winters. The southeastern regions have a hot arid climate similar to the climate of the Sahara. In the north of the Mojave Desert is Death Valley, nestled in the rain shadow of four mountain ranges, where the world's highest temperatures are around 50°C, with the highest temperature being 56.7°C in the shadow on July 10, 1913; the lowest temperature ever recorded, -9°C, was also recorded in that year. Since 2005, temperatures of 54°C or higher have been regularly recorded. The average daily temperature in July is 38.8°C. 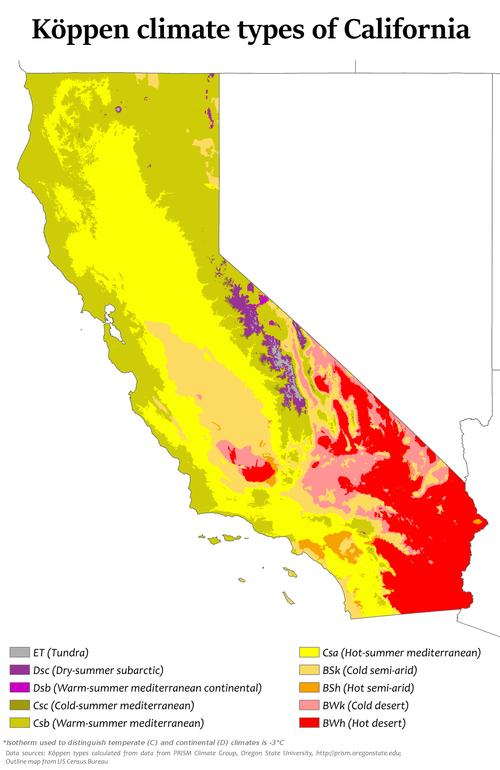 Major westerly winds from the Pacific bring rainfall ashore, more in the north of the state than in the south. The various mountain ranges are also important for the amount of precipitation: moist air from the west cools down and is discharged onto the western flanks of the mountain range.

Northwest California has rainfall levels of 380-1300 mm per year; the Coast Redwood forest receives more than 2500mm per year. The Central Valley has varied precipitation levels: the northern parts receive substantially more rainfall than the southern parts and the Central Valley is regularly covered with a thick layer of fog (local name = tule fog), especially from November to March.

The high mountain ranges, the Sierra Nevada, the Cascade Range and the Klamath Mountains, have a mountain climate with snow in the winters and moderate summers. Ski resorts like Lake Tahoe, Mammoth Lakes and Mount Shasta receive at least three meters of snow in the winter season, often more.

The eastern flanks of the mountain ranges are in the much drier rain shadow, with desert areas east of the Sierra Nevada and the Transverse Ranges and Peninsular Ranges in southern California. The low-lying desert areas east of the southern mountain ranges belong to the Sonoran Desert with hardly any winter frosts. The higher desert areas such as the Mojave Desert, Owens Valley and the Modoc Plateau have more of a continental climate with cold winter nights. During the summer months, from July to the beginning of September, this region is hit by the Mexican Monsoon, which causes heavy thunderstorms and rain showers coming from the Pacific, Gulf of California and / or the Gulf of Mexico. California is virtually unaffected by tropical cyclones, although in 2017 the state was hit by severe storms and very high rainfall in a short period of time.