The United States of America is a federal constitutional republic, with power shared between the president as head of state and government, the United States Congress and the judiciary. The federal government, in turn, shares sovereignty with the state governments of all 50 individual states. The president of the executive branch is the president; Congress as a legislative power sits in two chambers, the House of Representatives and the Senate; the judiciary, which interprets and assesses the constitution, federal laws, is in the hands of the Supreme Court as the supreme body, under which the lower federal courts rule.

The President of the United States is indirectly elected by the American population. The voters in the various states do not rely on the presidential candidate, but on electors who support a particular president candidate. The number of electors of a state is equal to the number of Congressmen of that state. California is the most important state for some electoral votes, as many as 55. The candidate who obtains the most votes in a state can send all electors to the Electoral College. In total there are 538 electors to win, the candidate with at least 270 electors behind him will become president of the United States. 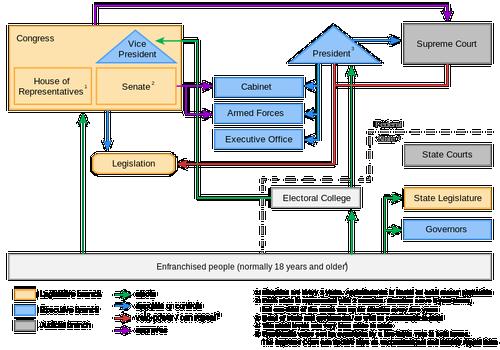 In the United States, the Democratic and Republican Parties have ruled since the American Civil War (1860-1865). That applies to both the federal government and the state governments. Below is an overview of the governors and their party since 1849. Until now, California had 21 governors of republican rule, 17 governors of Democratic background, one governor of the American Party and one governor of the Progressive Party.

The fifty states of the United States are divided into so-called 'counties'. The fifty states are made up of 3,007 counties, averaging 62 per state, California has 58, and Texas has the most, 254. The division of power between states, counties, cities and towns is determined in the constitutions of each state.

Every US state, except for the state of Nebraska, has its own congress with a bicameral parliament, a House of Representatives and a Senate. the number of seats per state varies greatly, senators usually have a term of office of four years, deputies often only two years. The state administration is headed by a directly elected governor. The governor has a lot of power in his or her four-year, sometimes two-year term. 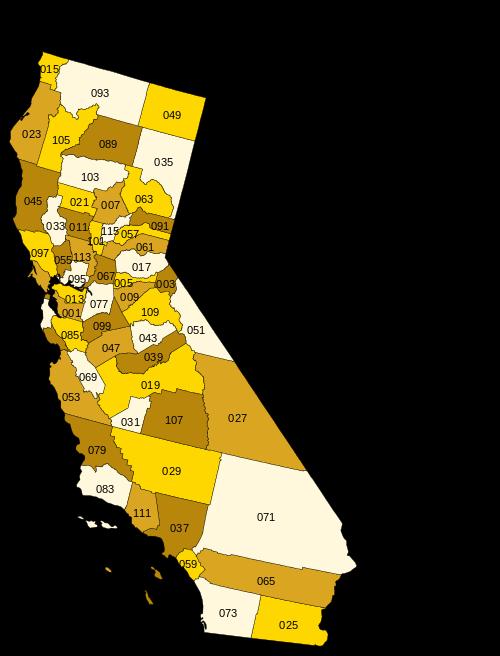 There are also major differences at the county and local level. At city level, three forms can be distinguished, which also occur in combination:

Council and mayor: the council members are sometimes appointed, sometimes elected, and have budget rights. They also draw up general policy guidelines and monitor the city council. The mayor is almost always elected and has a veto, among other things.

-Commission: a committee of 3 to 7 elected members, one of which acts as chairman, is both legislative and executive.

City Manager: This figure is hired indefinitely and executes decisions of an elected council.

Many referendums are held at provincial and local level in all American states, and in California a great many. They are often citizen initiatives.