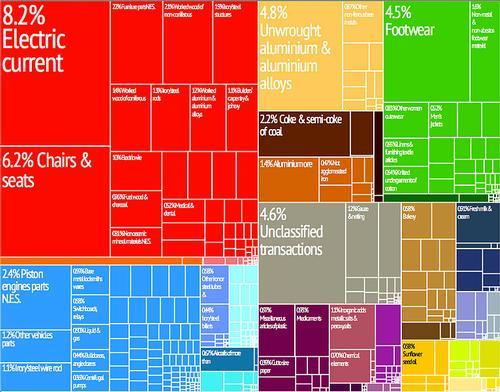 Bosnia and Herzegovina has long been a backward country economically. Bosnia and Herzegovina was a country of peasants, with many small, barely viable businesses. Bosnia-Herzegovina, along with Macedonia, was one of the poorest countries in the former Yugoslavia. Only after the Second World War did the economic situation improve due to the strong promotion of industry and the exploitation of mineral resources such as coal, lignite, lead, silver and manganese.

The struggling economy was completely destroyed again by the civil war. Approx. 80% of the industrial potential was destroyed and in the countryside large tracts of land became unusable for agriculture by the mines. Moreover, the infrastructure had largely disappeared and almost half of the population had fled.

Immediately after the Dayton Agreement, however, reconstruction started again, with the help of international donors. They made 1.5 billion dollars available for projects.

Despite this strong support, the economy continued to falter, not least due to ongoing smuggling practices and corruption at all levels of society. The tense situation between the various population groups prevents successful cooperation, which is necessary to get the economy back on track. As a result of all this, almost half of the labor force is still unemployed and an even greater percentage of the population lives below the poverty line. The only bright spot in this situation is that many of the unemployed participate in the informal economy, which involves a lot of money. The government now has the task of including all those jobs in the formal economy, so that the economy can pick up again.

Since the 1950s, many Bosnian Yugoslavs have been looking for work on the Dutch and German labor market. As a result, unemployment fell sharply in the Netherlands, but also had a negative effect on the quality of labor and labor productivity in Bosnia itself.

However, the money that was sent back to their own country ensured that the position of the families in Bosnia was improved and the balance of payments could be put in order. Bosnia and Herzegovina InfrastructurePhoto:Eao-be CC 3.0 Unported no changes made

Approx. 13,000 km2 of agricultural land (mainly in the Sava and Drina valleys) is occupied by meadows of moderate quality; About the same amount of agricultural land is used for arable farming and horticulture, with wheat, maize, potatoes, sugar beets, tobacco and grapes as the main products. Fruit cultivation (especially plums, half of which is converted into spirits) is concentrated in Central and Northern Bosnia, tobacco is grown in the poljes, vineyards are predominantly located in Herzegovina. Agriculture is predominantly small-scale and not very efficient.

Approx. 35% of the country is covered with forests. Hence, forestry provides an important part of the national product.

There is also some metal, textile, chemical, sugar and tobacco industry. The most important stocks of iron ore are in Bosnia, one at Vares, one at Ljubija. Due to the presence of many raw materials, the metal industry and mining in principle have a lot of potential, but must be modernized quickly. Cooperation with foreign companies and attracting new capital is a precondition. However, the industry will never thrive unless transport options improve. Most roads are very bad and many waterways are still dangerous because of the mines.