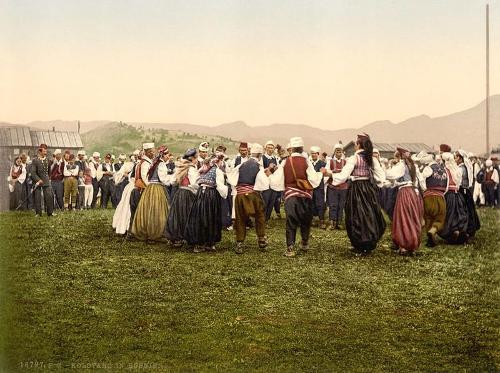 Bosnian Folk DancesPhoto:Snapshots Of The Past CC2.0 Generic no changes made

Before the 1992-1995 civil war, 44% of the population was Bosnian Muslims (now Bosnjaks), 31% Serbs, 17% Croats, 6% 'Yugoslavs' and the remaining 2% Montenegrins, Roma, Albanians and Ukrainians. Today, the distribution is roughly: 50% Bosniacs (the religion-neutral name of the group previously classified as Muslims), 31% Serbs, 15% Croats and 4% others.

The Roma (formerly called Gypsies) have lived in Bosnia-Herzegovina since the 14th century. With several tens of thousands of people, they are the largest minority in the country.

In 1941 most of the Jewish community was deported and murdered. At the moment there are between 500-1000 Jews living in Bosnia.

It is estimated that as a result of the violence of war and the policy of ethnic cleansing during the war, approximately 60% of the population of that time was expelled from home and home. More than 250,000 refugees have been killed or are missing. Approx. 1.3 million people fled within Bosnia and Herzegovina and 1.2 people fled abroad.

After the war, many returned, but encountered new difficulties. Refugees returning to places dominated by their ethnic communities had the least problem. However, people returning to areas that had changed ethnic majority through the war were now in the minority there. These people also had little to expect from the government.

Young families with small children moved en masse from the countryside to the city. From the signing of the Dayton Agreement to the end of February 2002, 834,000 displaced persons and refugees have returned. It is estimated that approximately 700,000 displaced persons will never return to Bosnia and Herzegovina.

Many families are incomplete because the husband has died; women and children are often severely traumatized. Help for these people is inadequate.

In Bosnia-Herzegovina, there were 3,856,181 million people in 2017. The population density is approximately 75 inhabitants per km2.

The average life expectancy is 73.9 years for men and 80.3 years for women.