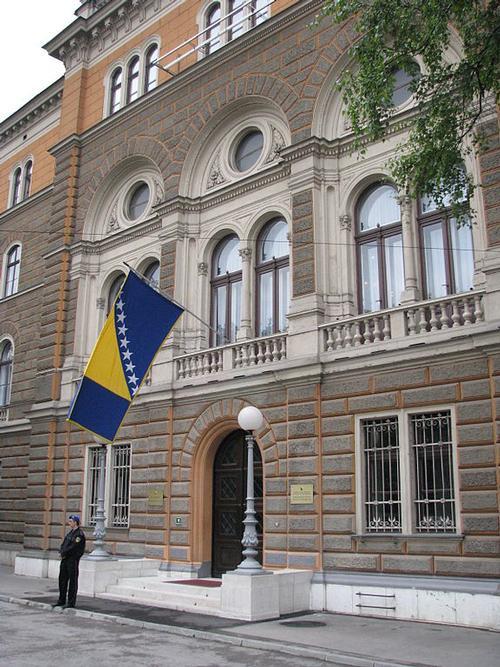 Bosnia and Herzegovina has been an independent country since 1992. According to the Dayton Peace Agreement (1995), it is a federative republic consisting of two autonomous states or 'entities': the Muslim-Croat Federation (51% of the area) and the Bosnian Serb Republic (Republika Srpska, 49%). Both states have their own president, government and parliament.

The European Union and the United Nations monitor compliance with the peace agreement and have the power to dismiss administrators.

SFOR's many thousands of NATO troops must prevent new hostilities. On April 2, 2003, High Representative Ashdown amended the constitutions of the Serbian Republic and the Muslim-Croat Federation by moving control of the armies of both entities to the state presidency.

The central government of Bosnia and Herzegovina consists of two chambers with legislative power (the People's Chamber with 15 members and the House of Representatives with 42 members), a three-person Presidium, a Council of Ministers, a Constitutional Court and a Central Bank. All these bodies are based on the principle of ethnic equal representation. The central government is responsible for foreign policy, foreign trade, import duties, immigration policy, monetary policy, international law, aviation, communications, financing the government and entering into agreements with other states or international organizations. Both entities have their own armies, which are, however, under the authority of the Presidium of Bosnia and Herzegovina.

The Muslim-Croat Federation has a rotating presidency. Legislative power in the Federation consists of two chambers: the Federation House of Representatives (140 seats) and the People's Chamber (30 Muslims, 30 Croats and 20 others).

The Republika Srpska has a president and a vice-president who is directly elected for a four-year term. The National Assembly of Republika Srpska is elected on the basis of proportional representation and has 83 members. For the current political situation, see chapter history.

Bosnia-Herzegovina is divided into ten cantons, each with its own parliament and administration. All functions and powers not explicitly attributed to the central institutions of Bosnia and Herzegovina in the Dayton Agreement are vested in the entities.

Within the Muslim-Croat Federation, functions and powers that are not explicitly attributed to it fall under the cantons.

From the age of seven, children are obliged to participate in eight-year primary education. After primary education, they can opt for three or four years of secondary education, possibly followed by vocational training. University education lasts 4-6 years with possibly further specialization. Bosnia and Herzegovina has four universities. The University of Sarajevo (1949) is the oldest, Mostar, Tuzla and Banja Luka were all founded in the 1970s.

Both entities each have their own Ministry of Education, while Croatian and Bosnian education is also provided in all cantons.

To make it even more complicated, all cantons have their own legislation that regulates education. The schools in the Bosnian cantons work with federal school materials; learning materials from Croatia are used in the Croatian cantons.

In the Republic of Srpska, education is fully regulated by the Ministry of Education.

In the Brcko district, innovative legislation ensures that students of different nationalities are taught together. For example, they must learn technical terms in three different languages and be able to use both alphabets. The intention is to increasingly arrange this type of education centrally and introduce it locally.

In April 2002, with the signing of the so-called Mrakovica-Sarajevo Agreement, a compromise was reached on a number of constitutional amendments, which had been negotiated following a decision of the Constitutional Court two years earlier. The constitution included the principle that BiH has three constituent population groups. This new constitutional provision has far-reaching consequences, as it regulates the political representation of the three population groups in those areas where they are a minority (i.e., for example, compulsory inclusion of Muslims in the RS parliament and vice versa in the parliament of the RS). Federation). The governments formed on the basis of the election results of October 5, 2002 are the first to be covered by the new rules.

The 1992-1995 war on Bosnian territory had an extremely unpleasant aftermath for the Netherlands due to the tragic fall of the Srebrenica Muslim enclave in 1995.

Dutch UN soldiers were supposed to protect this so-called "safe area", but despite that, about 7,500 Muslims were murdered by the Bosnian Serbs. In 2002 the long-awaited NIOD report was published, the conclusions of which forced Prime Minister Kok's cabinet to resign. Commander in Chief Van Baal also resigned after heavy pressure.