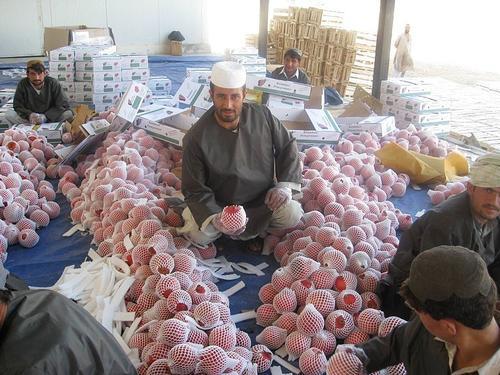 The civil war in Afghanistan has severely damaged all sectors of the economy, which was one of the weakest in the world even before the invasion of the Soviet Union.

Many agricultural areas have been destroyed or made inaccessible by mines. About a third of the agricultural infrastructure has been destroyed, also due to years of drought. The yields from agriculture and livestock are about half of that in 1978. In addition, almost the entire agricultural sector is dependent on irrigation, and many irrigation channels and systems have suffered from war activities. Most of the agricultural land is located around a number of major cities spread across the country: Kunduz and Mazir-i Sharif in the north, Jalalabad in the east, Kandahar in the south, and along the Herat River to the west. Typical products for these areas are grapes, nuts, pomegranates and melons.

Nomads, also called 'kuchi', go into the mountains with their herds of sheep and or goats. Nomads buy all kinds of products from the farmers, the farmers buy products such as milk, skins and wool from the nomads. 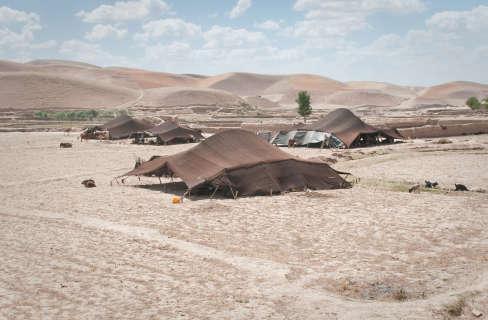 The small industrial sector was wiped out. Many factories and machinery have to be rebuilt, including those for the supply of energy and water. Since 2002, economic activities have been resuming, especially in the cities, especially in and around the capital Kabul. Inadequate transport and communication options hinder growth, in addition to the constant insecurity.

Since 2001, after the fall of the Taliban regime, the Afghan economy has been growing strongly. This is partly due to the good harvests in recent years, there was sufficient rainfall, and the reconstruction activities, which contributed to the growth in construction, trade, transport and telecommunications. Of course, financial aid from abroad is also very important, usually in the form of development aid from donor countries. Of great concern is that corruption persists at every level, weakening foreign confidence in the government of Afghanistan.

The private sector develops mainly in the cities. The first foreign investments are a fact. AISA (Afghanistan Investment Support Agency) was established in August 2003 as a "one-stop-shop" for investors. This resulted in an increase in foreign direct investment in Afghanistan, mainly construction, telecommunications and industry. Furthermore, the World Bank has started insuring political risks and the first foreign banks have been opened in Kabul. The infrastructure is also gradually taking shape: the Salang tunnel in northern Afghanistan has been reopened and the first part of the road network has been restored. 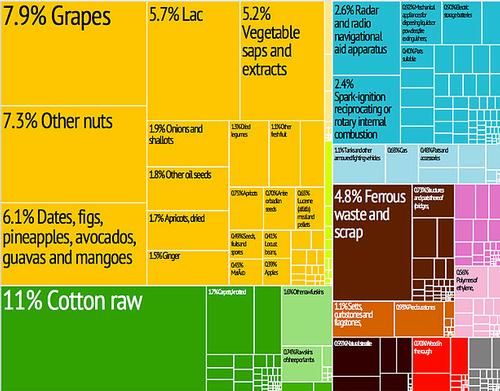 The government has announced a new tax system, which will increase tax revenues. According to the IMF, the government has made good progress in improving economic management and achieving macroeconomic stability. Nevertheless, fiscal discipline is still in its infancy and further administrative reforms are necessary. To further stimulate the private sector, market regulation, commercial law and respect for property rights need to be strengthened. Consolidating economic growth requires improvement of the security situation and inadequate infrastructure, as well as the development of clear authority relationships between Kabul and the rest of the country. At the moment, not the whole country can benefit from the economic impulses. In the coming years, Afghanistan will remain largely dependent on external sources of money.

The role of the region is also of great importance for economic development. Afghanistan is also a member of the SAARC (South Asian Association for Regional Cooperation) and the Shanghai Cooperation Organization.

Afghanistan is one of the poorest and least developed countries in the world due to decades of wars and lack of foreign investment. In 2017, the gross national product was approximately $ 69 billion and the income per capita was $ 1,900.

Nevertheless, there are also many positive developments to report, including that the gross domestic product has increased fivefold since 2002. In addition, more than 100 business partnerships and Chambers of Commerce have been established, including several dozen by women, in cities such as Herat, Jalalabad, Kandahar, Kunduz and Mazar-i Shariff. In 2007, only 7% of the population had access to electricity, in 2017 that percentage had risen to more than 40%, partly due to the commissioning of 18 mini-hydroelectric power plants in the province of Bamiyan, sponsored by the Netherlands, Denmark , Japan, Norway and the European Union.

Afghanistan has on its territory enormous amounts of raw materials and minerals, which are also very different in nature. The problem is to mine all those mineral resources, the money is not there and the (civil) war situation in which Afghanistan finds itself almost constantly does not really help either.

In the far northeast of Afghanistan, in the province of Badakhshan, the semi-precious stone 'lapis lazuli' has been mined since the time of the pharaohs in Egypt. At the town of Sar-e Sang is one of the oldest operating mines in the world. 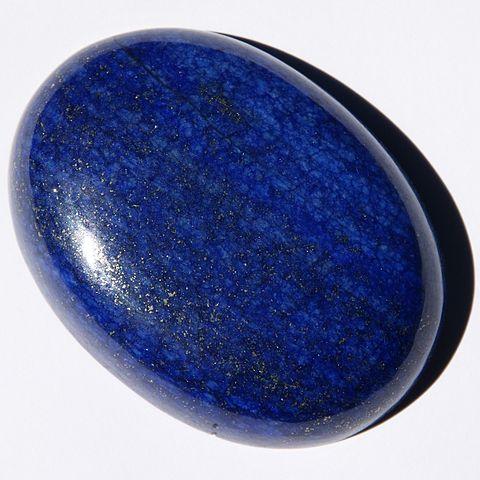 Art object made from lapis lazuliPhoto: Hi-Res Images of Chemical Elements CC 3.0 no changes made 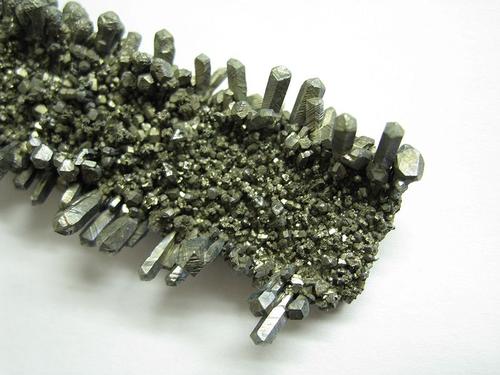 Niobium is found in AfghanistanPhoto: Dnn87 CC 3.0 Unported no changes made

Tourism to Afghanistan was at its peak in the 1970s, more than 90,000 annually visited Afghanistan to enjoy the beauty of the country and the very friendly people. At the moment Afghanistan is a dangerous area to go to.

The cultivation of poppies, particularly in the southern province of Helmand and in a dubious second place in the northeastern province of Badahshan, was strictly prohibited during Taliban rule, but re-emerged on a large scale after the fall of the Taliban in 2001, and according to the United Nations, never before has more poppies been grown than at present. And this despite the billions that the United States has invested in the fight against poppy cultivation. The 'illegal' cultivation of the bulb poppy or sleeping bulb still generates an important and reasonably stable source of income, especially for the local rural population in the south of Afghanistan.

Since the crop does not require much water, it is easy to grow. Milk juice is extracted from the seed bulb or moon globe and from its dried form opium is extracted, the raw material of heroin, among other things. In the province people do not talk about grams or kilos of drugs, but about tons. Afghanistan remains the world leader in opium production in both size and quality. At the end of 2014, it was announced by the United Nations that never before so much poppy was grown in 2014. In one year, more than 15,000 hectares of land were added, making an estimated 224,000 arable land used for the cultivation of poppy. Opium production increased by 17% to 6,400 tons, good for a street value of 65 billion dollars. About 42% of that enormous quantity was produced in Helmand Province and about 8% in Badakshan Province.

The northern Balkh province is known for the cultivation of cannabis. Smoking cannabis or 'charas', despite being officially banned, has a long tradition in Afghanistan. Only in the province of Balkh is the special variety 'shirac' grown, an easy plant that requires little water and care. 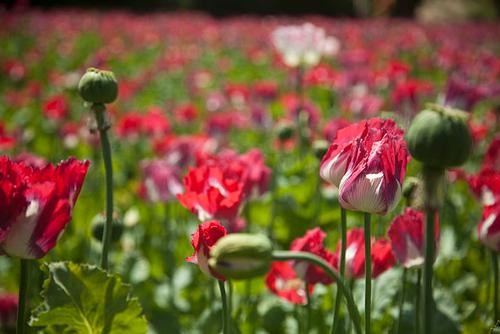 An agricultural product that is increasingly being grown in place of poppy is the flavoring and coloring saffron, the world's most expensive spice, made from the dried pistils of the saffron crocus, a plant that is remarkably absent in the wild.

The largest producer of the very expensive saffron due to the labor-intensive cultivation is Iran (approx. 200 tons), with approx. 85% of the world production. Saffron is now grown in almost all Afghan provinces, but especially in the northwestern province of Herat, with the harvest generally being done by women. Saffron currently yields much more for Afghan producers / farmers than poppy, sometimes as much as four times as much. One pound of saffron is easily paid $ 1200. In 2013, Afghanistan produced 4.5 tons of saffron, most of which was exported. The saffron crocus has a seven-year growth cycle, yielding about $ 2500-3000 per hectare in the first year. In the third and fourth years, this can amount to $ 28,000 per hectare. The cultivation of poppies yields a maximum of approximately 3,500 euros per hectare. 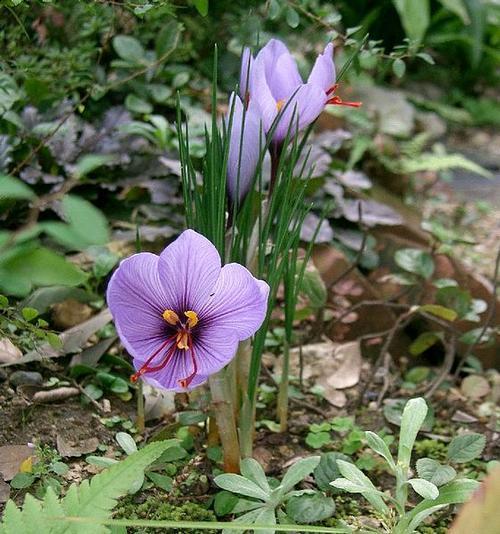 Particularly in northwestern Afghanistan, many karakul sheep are kept, which are known for their silky coat. This fur is used in both the Afghan and the international fashion industry and the wool from the sheep is an important export product. It is controversial, however, that the best wool comes from unborn feets and newly born lambs. 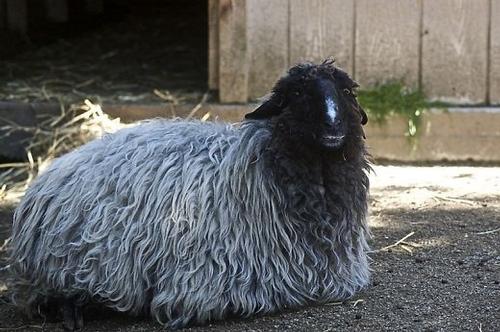