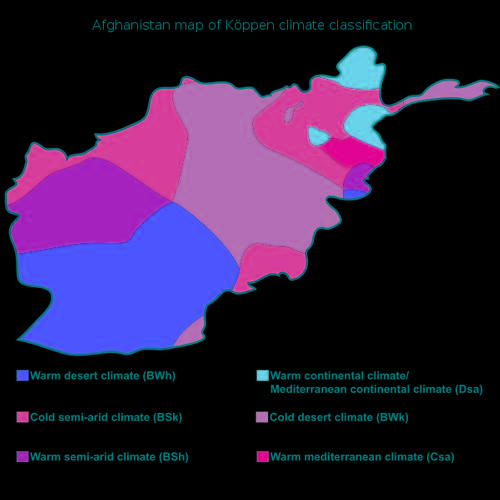 Afghanistan generally has a continental climate with dry, hot summers and cold winters. Of course there are considerable differences due to the size of the country and due to the mountainous areas in the middle and northeast of the country. Summers can be very hot in the lower regions with temperatures above 40 °C and with peaks of more than 50 °C in cities such as Herat, Mazar-i Sharif, Jalalabad and Kandahar. Due to its location in relation to the mountains, the temperatures in summer can be had in higher-altitude cities such as Kabul, Bamyan and Faizabad. In the mountains, the temperature can drop to more than -30 °C.

In the north it can be bitterly cold in winter due to the wind blowing from Siberia in Russia. In the northern city of Mazir-i Sharif, for example, the extremes are far apart with an average of 4.5 °C in December and more than 33 °C in July and a maximum of 43 °C. To the east and south of the mountain ranges, the climate is much less extreme, for example in the capital Kabul. This city is located at an altitude of 1800 meters and it is therefore not surprising that there is usually snow in winter with temperatures averaging -3 °C in December. Summer is quite pleasant with an average of 25 °C in July. 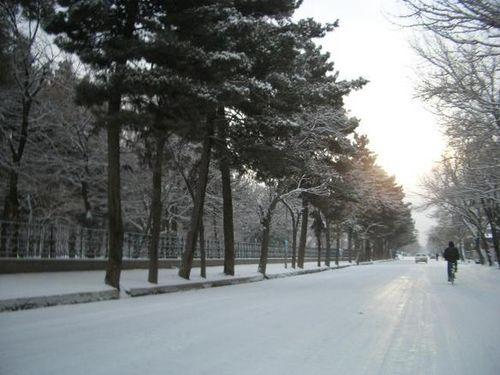 Street in Kabul covered with snowPhoto: Aulfat CC 1.0 Generic no changes made

Around Jalalabad in the east, much lower than Kabul (300 m), it is an average of 7°C in December and about 35 °C in July with high humidity. The southwest regions have a desert climate, but temperatures are between 2 °C in January and 29 °C in July. High-altitude Central Afghanistan has a dry mountain climate, with summers reaching a maximum temperature of 28 °C and cold nights even in August. From November, temperatures drop to or below freezing with a lot of snowfall, which can last until March or even April.

There is always snow on the highest mountains in Afghanistan, almost all mountainous areas are covered with snow from November to March. Precipitation in the form of rain falls mainly in winter, where there are also large differences. For example, in the desert-like areas in the southwest, an average of about 75 mm falls per year, but in some years only a few millimeters, and in the Salang pass at an altitude of more than 3000 meters above Kabul, about 1150 mm and in Nuristan in the northeast falls more than 2000 mm, sometimes even in the form of monsoon rains from South Asia. In Kabul itself an average of about 305 mm of rain falls per year. In 2014, floods affected more than 100,000 people in 27 provinces and 123 districts. Jawzjan, Faryab, Sar-e Pul, Baghlan and Balkh districts were most affected, with 6,800 houses destroyed, 7,600 heavily to lightly damaged. Snow on mountains in the eastern province of PaktiaPhoto: Fred W. Baker III in the public domain

Western Afghanistan, particularly Herat Province, is known for the bad-i-sad-o-bist-roz, the '120 days of wind', which blows at speeds of up to 100 miles per hour from June to September. Complete existing dunes in this desert area are relocated and new dunes are formed. 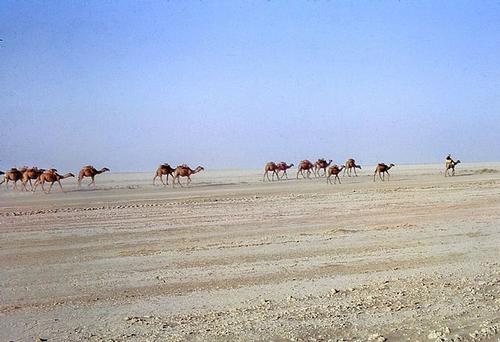