In the 18th century, Afghanistan was divided into the four (semi) autonomous regions of Herat, Kandahar, Turkistan and Qaraghan-Badakshan, with Kabul as the capital. King Abd al-Rahman (reign 1880-1901) subjected the four regions to his power and placed confidants as governor in the seat of government to keep the regions easily under control. During the reign of Mohammed Nadir (reign 1929-1933) Afghanistan was divided into five main and four less important administrative areas. 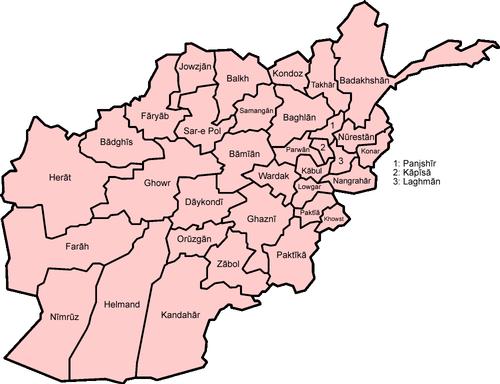 Provinces of AfghanistanPhoto: Golbez CC 3.0 Unported no changes made 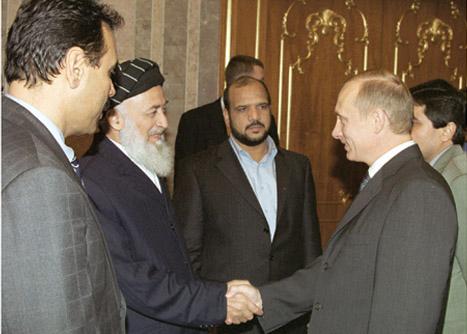 The Afghan mudjahedin groups concluded an agreement in 1992 that provided for a transition period. Rivalry between the different groups made decisions about a transitional government more difficult. Burhannudin Rabbani was eventually appointed President and Hezb-i-Islami leader Gulbuddin Hekmatyar was to assume the position of Prime Minister. However, the Sunni ultra-conservative movement of the Taliban soon emerged. After Kabul captured by the Taliban in September 1996, President Rabbani and Commander-in-Chief Massoud fled the city and the government army retreated to the north. The Taliban controlled most of the country. Their opponents united in Northern Alliance led by General Ahmed Shah Massoud (backed by Iran, Russia and CIS states). Peace initiatives by, among others, the neighboring countries plus the USA and Russia, under the auspices of the UN and the OIC, have yielded nothing.

Since the Bonn agreement and the appointment of the Afghan Transitional Authority (ATA ) in 2002 the situation was relatively stable. The Pashtun Hamid Karzai was chairman, but this government was dominated by Tajik politicians. The Pashtuns, often regarded as accomplices of the Taliban at the time, were under-represented. The power of the regional rulers appears to have diminished in recent years, in favor of the central authority. For example, a number of regional rulers have joined the formal power structures in Kabul. Others have been relieved of their duties and put on hold.

There are still frequent incidents that make large parts of the country unsafe: fighting involving warlords and attacks, especially by the Taliban, against western aid workers and soldiers. Significant progress has been made in the process of disarmament, demobilization and reintegration (DDR) of former combatants and a start has been made on the disarmament of illegal armed groups (DIAG). In contrast, large drug production and trafficking hampers the central government's ability to further expand its authority.

Thanks to the presence of the International Security Assistance Force (ISAF), security in Kabul and the surrounding area is reasonable. ISAF expansion to the south is underway, including through Provincial Reconstruction Teams (PRT). In addition, there are a number of PRTs under Operation Enduring Freedom, the Coalition's anti-Taliban and Al-Qaeda military undertaking led by the USA. This operation seems to continue for some time. 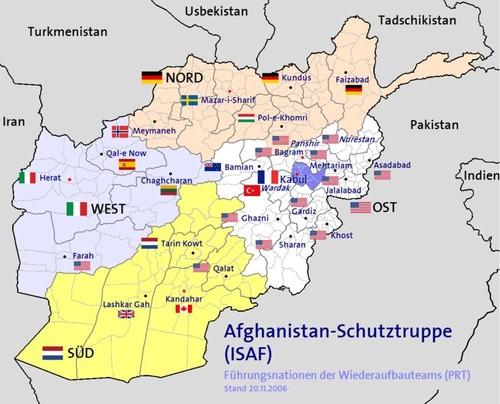 The October 2004 presidential elections were quiet and successful beyond expectations. There were 17 candidates, including President Karzai, the big favorite. Despite an increase in the number of security incidents in the run-up to these elections, they went very well. The turnout was high, about 80 percent of those eligible to vote. There was a limited number of technical irregularities, but after a special investigation panel concluded that the errors identified did not materially affect the final outcome of the election, all candidates accepted the result. Karzai received over 55% of the votes cast, followed by Qanooni (16.3%), Mohaqeq (11.6%) and Dostum (10%). Karzai was thus elected president in one round. Voting has largely taken place along ethnic lines.

Karzai's current cabinet is technocratic and relatively "clean" cabinet: most of the ministers have a professional background, all ethnicities are represented and most warlords are excluded. Karzai is expected to slightly change and downsize the cabinet, which is to be approved by the new parliament.

The elections to parliament and provincial councils of September 18, 2005 appeared to have gone well, with a quiet election day and approx. 55% turnout. However, when the votes were counted, many cases of fraud came to light, delaying the outcome. Also found all over the country otherwise peaceful demonstrations instead of dissatisfied voters and candidates. A good number of ballot boxes that had been tampered with were excluded. The Electoral Complaints Commission has since handled thousands of complaints. Incidentally, the process has still gone reasonably well for a post-conflict situation. 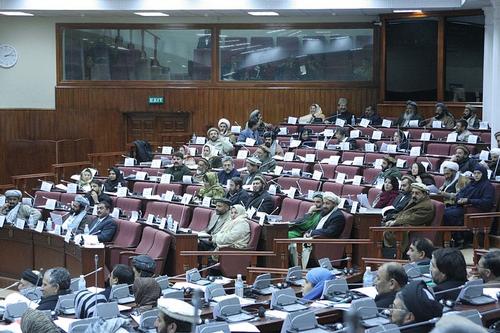 In particular, many jihadi and warlords have been elected to parliament (about 100), who are largely conservative, but will partly also support Karzai. A positive point is that a number of reform-minded representatives have been elected, many of them women. Parliament is expected to be fragmented and ethnically balanced. Both the opposition and the government do not have a clear majority; President Karzai will always have to negotiate to get support for his policies. After the members of the provincial councils became known, these delegates elected to the upper house and President Karzai appointed the other members. The House of Lords has less notorious figures than the House of Commons. Parliament was naugurated on December 19, 2005. Subsequently, Qanooni was elected President of the House of Commons (Wolesi Jirga with 249 seats) and Mojadeddi as President of the House of Lords (Meshrano Jirga with 102 seats).

Approximately 70 political parties have been registered, but these are do not play an important role in Afghan politics, as the electoral system is based on geographic representation by individuals (Single Non-Transferable Vote). The political parties are mostly Islamic (jihad groups), democratic (reform-minded), and some (former) communist. There are also some royalist political parties, mainly consisting of Pathans. According to the law on political parties, parties with a military wing (as well as presidential and parliament candidates with militia) are banned; this criterion contributed to the GDR process.

In ancient times, reading and writing was only learned by the mullahs, Islamic clergy who study the Quran but are also authoritative in many other areas.
From the 19th century on, official schools were founded in Afghanistan, only the first secondary schools in the early 20th century. The first girls' school was established under the rule of Amir Amanullah (1919-1929). From the 1930s onwards, education became compulsory, but not much of this has been achieved in practice to this day. The University of Kabul was founded in 1932.

The Taliban regime has had a disastrous influence on the already inadequate school structure in Afghanistan. At that time, there was no longer any question of structure in education, and that still influences the current situation. Less than 50% of all men can read and write, this percentage is considerably lower for women. Obviously, the percentages are higher in the cities than in the countryside. 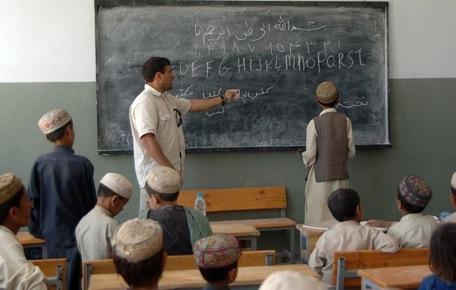 The University of Kabul currently has about 7,000 students, of which more than a thousand girls. The American University of Afghanistan is also located in Kabul. Scattered across the country, there are still universities in the cities of Kandahar, Herat, Balkh, Nangarhar and Khost. 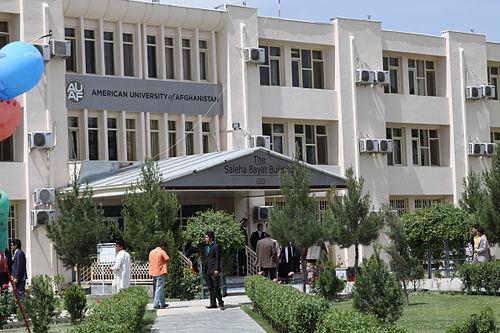 Saleha Bayat Building of the American University of Afghanistan Photo: USAID Afghanistan in the public domain

Symbolically for Afghanistan is the burqa or chador, a garment worn by women. The burqa covers the woman's entire body, including the face. The woman can still see through a kind of gauze. The burqa was introduced in Afghanistan from the Indian subcontinent in the 19th century.

The burqa consists of a cap, the chador and the ruband, the face veil. These parts are sewn together and together form the burqa. Most burqas in Afghanistan are blue, but white burqas are usually worn in the north.

At the time of the Taliban rule, almost all women wore a burqa, at the moment it is mainly women in the east and south who wear a burqa. burqa. In the west the chador is the favorite, in the north of Afghanistan women often wear a long robe with a headscarf. 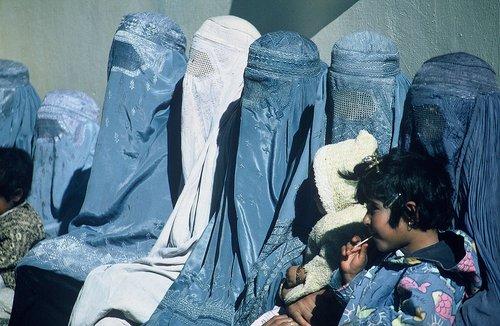 Kite fights are very popular in Afghanistan. The name for this sport in Afghanistan is 'gudiparan bazi' and the cutting line is called 'tar'. The tar is made of cotton and covered with a mixture of ground glass and rice glue. The kites are between half and one and a half meters wide and, depending on their size, a kite can fly up to 3,500 meters high.

From 1996 to 2001, kite flying was banned by the Taliban government. be Islamic. After the fall of the Taliban regime in 2001, there is a lot of flying again in Afghanistan. 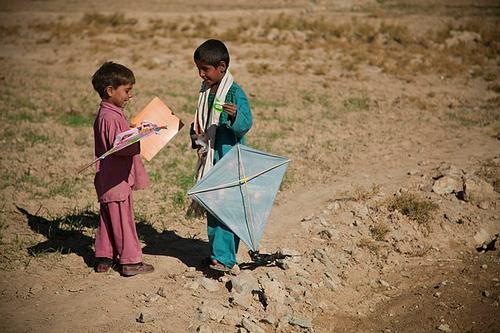 Children with kites in AfghanistanPhoto: U.S. Department of Defense Current Photos in the public domain